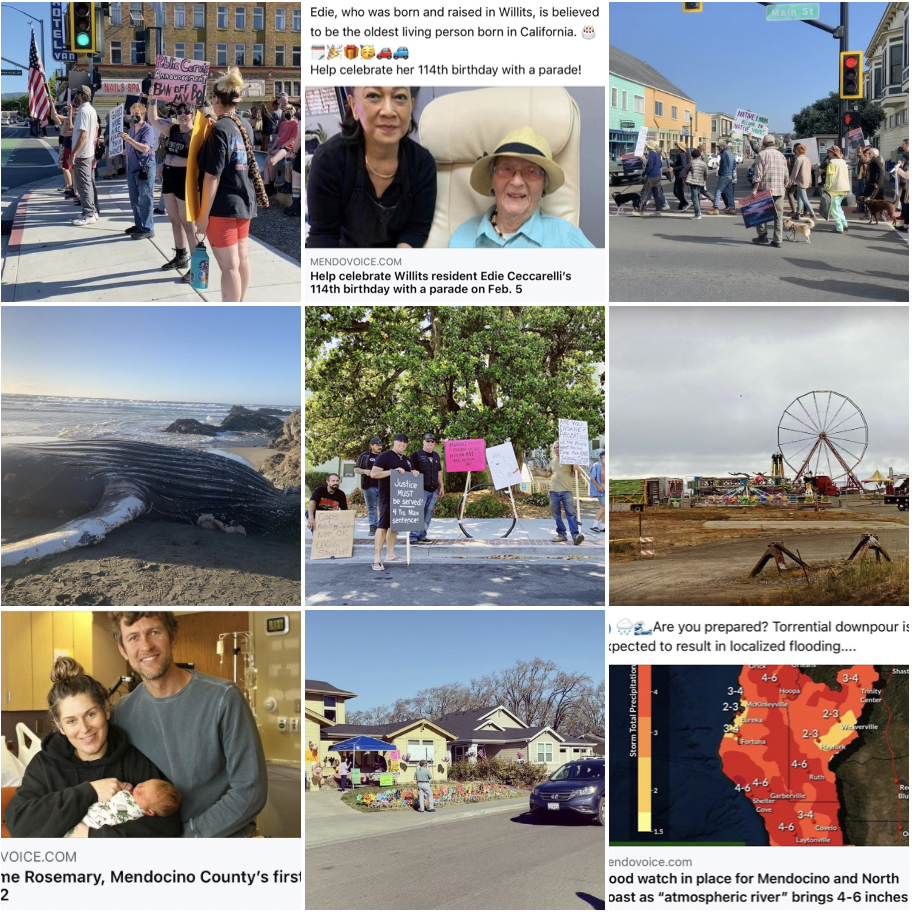 Our "top nine" most liked posts on Instagram from 2022.

Editor’s note: Do you want to see even more independent local reporting in 2023? We’re committed to keeping our news free for all of Mendocino County, but we rely on your support. Right now any contributions until Dec. 31 will be doubled and go directly to support even more coverage by our hard-working staff: donate here.

MENDOCINO Co, CA, 12/27/22 — Time goes by fast, and it’s hard to believe we’re already about to ring in 2023! But before we start reporting the great stories still to come, let’s take a walk down Mendocino County’s Memory Lane. We looked back at our most-read articles each month to offer a peek at the stories that captured you — the readers of The Voice — this year.

What do you think will be the most important issues facing our community in 2023, that you want to see covered? Let us know in the comments or by emailing [email protected]

We also got ready for the 114th birthday of Edie Ceccarelli, a Willits resident who is now the second oldest person in California. A community parade past her house marked the special occasion, as it has since the pandemic began.

The second unusually hot February in a row finally broke and brought more normal temperatures. The month marked a vigil for Khadijah Britton, a young woman from the Round Valley Indian Tribes who has been missing since 2018. Read more about Britton’s story and the Missing and Murdered Indigenous Women’s (MMIW) movement.

You were excited to read news of falling COVID-19 cases after a massive omicron surge, as the county prepared to end its mask mandate. Public Health Officer Dr. Andrew Coren said, “One thing we have learned is humility in the face of this pandemic and respect for what it takes to cope with it.”

In March, the Ukiah Police Department was “cleared of wrongdoing” and paid a $211,000 lawsuit settlement after their arrest of a young man experiencing a mental health crisis left him with significant injuries. His lawyer said the department had “institutional failure at the highest levels,” adding, “these clowns are going to kill somebody.”

Readers also learned about the 25-to-life sentencing of William Allen Evers, who some regarded as a “folk hero” and others a threat after he lived in the woods and burglarized vacation rentals on the coast  for a year.

Mendocino County reckoned in April with a new normal when it comes to fire season, as Mendocino’s new Cal Fire Chief Luke Kendall advised that we now have “a fire year.” He said, “If you look around the hills of Ukiah, you can see the grass is already turning brown and normally we don’t see that til late May, so we’re definitely ahead of schedule by at least a month.”

Mendocino cannabis farmers announced a series of in-person farmers’ markets in Laytonville organized by the Mendocino Producers Guild to showcase the variety of local crops and provide a chance to chat with the farmers.

The Owens Fire burned for two days and led to the evacuation of several homes near Point Arena in May. Luckily, this 36-acre blaze would turn out to be one of Mendocino County’s largest in 2022, behind September’s Walker Fire and July’s Bell Fire.

An alleged murder-suicide in Ukiah perplexed police, who found no documented record of violence between the deceased, but believed Shawn Stark had shot his wife, Suzanne Stark.

In June, local cultivators swept the cannabis awards at the first annual showing of this local crop at the California State Fair in Sacramento. Mendocino County farms won nine out of 19 awards, including “most unique.”

California held the statewide primary elections, and we brought you information on candidates forums, where to vote, and more through election night.

June also brought notable developments in the ever-unfolding story of alleged wrongdoing in the Ukiah Police Department. We kept you updated on the appointment of a new acting chief replacing Noble Waidelach as he underwent criminal investigation and former sergeant Kevin Murray’s prominent place on the department’s Facebook page despite awaiting trial on multiple felony sexual assault charges. To date, the results of the investigation into Waidelich remain a mystery, and Murray was sentenced to two years probation.

Mendocino showed its patriotism this July with a parade defending reproductive rights following the overturning of Roe v. Wade.

You also followed updates on former Ukiah Police officer Kevin Murray’s sentencing, and updates in the story of Fort Bragg’s Gina Rae Bean, out on bail during the appeal of her conviction in leaving the scene of the car crash that killed Calum Hunnicutt.

In August, prosecutors dropped all felony charges against Arturo Valdes, a man who suffered facial fractures in an arrest by the Ukiah Police Department following a minor traffic collision.

Mendocino Railway made our most-read headlines more than once this month, for suing the Coastal Commission over preclearance requirements and for filing to prevent railbanking of 13 miles of track near Willits destined for the Great Redwood Trail. (The Skunk Train operator’s bid to ship gravel on the track was later denied due to insufficient funds — more on the Great Redwood Trail here).

September saw a big story in Fort Bragg when a juvenile humpback whale washed ashore at Glass Beach. You loved reading about the Noyo Center for Marine Science’s response, which included X-raying the whale’s pectoral fin.

Fall turning to summer brought weather extremes for Mendocino County, from record-breaking heat to high rainfall early in the season. Plus, readers enjoyed a deep dive into the history and potential future of Fort Bragg’s Eagles Hall after it was purchased by the Skunk Train’s general manager.

You celebrated the life of Angela Lansbury in October, following the actress’ death at age 96. The village of Mendocino provided the setting for her iconic television series Murder She Wrote.

In tragic news, the remains of Laytonville teenager Aaron Joseph Vossler were exhumed from a shallow grave in Potter Valley, and another young man was charged with murder.

Our look into the Grand Jury report on special ed at Mendocino Unified was published this month, and we also kept you up to date on the challenges faced by local animal shelters and local vets, who are facing an overwhelming workload due to the pandemic.

Protests over the management plans for Jackson State Demonstration Forest continued this month, since logging was set to resume despite activists’ concerns.

We got a healthy dose of Mendocino County food, drink, and music news from our new culture reporter this fall, including her much-loved November story on Oscar winning actor Casey Affleck’s visit to Mendocino. He said Ravens Restaurant made “one of the best vegan breakfasts I’ve had that wasn’t home-cooked.”

November also saw local elections, with new candidates elected who will be stepping in to their roles in 2023. We brought you a look at a new affordable housing project in Fort Bragg, and you also stayed up to date on circulating viruses this year, including COVID-19, influenza, and RSV.

December ended 2022 on a high note when it came to environmental news: You loved reading about Fort Bragg’s plans for three new reservoirs and learning about the city’s leadership in clean energy and desalination efforts, plus an in-depth look at coastal tourism and the ongoing drought. Plus, a local diver spotted a sunflower sea star after catastrophic decline in the species, with kelp restoration specialists calling the sighting “a major win.”

Despite the storms and burglaries, our local restaurants won Michelin awards and stayed open when you needed them!

Mendocino, thank you for reading along with us. We hope our reporting helped you stay informed on local news across our county and the North Coast: the good, the bad, the weird, the surprising and complicated stories of this place we all care about.

If you want to support another year of reporting from The Mendocino Voice, we’d love that! Until Dec. 31, your donation will be tripled. Donate here, and consider becoming a member so that we can keep bringing you important stories you love to read.