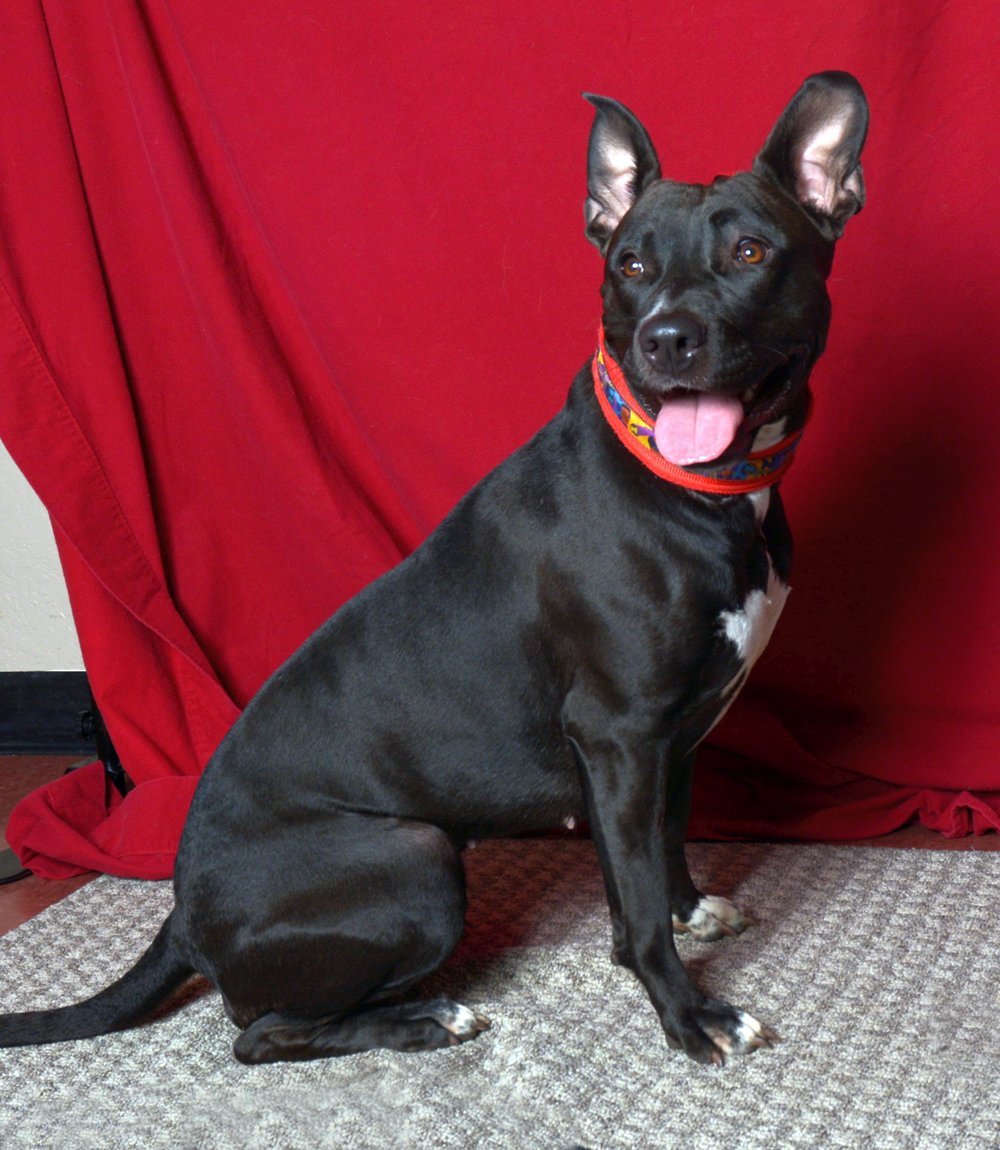 This dog, Betty, is free to adopt (with a $25 license fee) from Mendocino County Animal Care Services.

MENDOCINO Co, 10/13/22 — In the course of necessary operations, the Mendocino Coast Humane Society (MCHS) regularly accumulates deficits of more than $10,000 each month. This summer, Mendocino County Animal Care Services came closer to euthanizing animals for space than it has in years. The Humane Society for Inland Mendocino County (HSIMC) is in the middle of a six-week suspension of new animal intakes.

“We need to rebuild what we’re doing and reevaluate how we can continue to meet the needs of the community,” HSIMC Administrative Director Jenny Hanzlik told The Mendocino Voice.

This year, many animals coming through the inland shelter have needed expensive procedures such as dental surgeries, joint rebuilds, and amputations. Hanzlik estimates that intake has also increased by around 25 percent compared with past years — and as a shelter funded entirely by community donations and assistance, financial and logistical support for their work can’t keep pace with the demand.

“We’ve had to reorganize our processes a bit, and we’re offering some additional things like courtesy posting for owners attempting to rehome their dogs, without them coming to the shelter,” she explained.

HSIMC is also looking to hire a volunteer coordinator, and is developing a team to work on addressing animals’ behavioral issues to keep them in their existing home. Hanzlik hopes for a “great reset.”

She’s not alone in these struggles; Director Judy Martin and Shelter Manager Richard Molinari, of MCHS and the county shelter, respectively, say their shelters have seen an uptick in intakes, too. Normally, when one area shelter has animals it can’t accommodate, others around Mendocino and even Sonoma step in to help.

But rampant high need is putting greater strain on each facility. When The Voice spoke with Martin, she had taken in 20 dogs from Covelo the day before. In the midst of a phone conversation, Molinari received a call about someone who’d moved out of their home but left their dog running around the property.

“It’s quite a whirlwind for us right now,” Martin said.

As the county shelter, Molinari’s facility takes in animals from court cases and animal control — and since they can’t pause those kinds of intakes, euthanizing for space must be an option. Though it’s been more than five years since that type of euthanasia has been necessary, it makes overcrowding even more worrisome.

“Let’s hypothetically say that tonight, between California Highway Patrol, the Ukiah Police Department, and the sheriff’s department, they bring me five or six dogs overnight — and by the way, that happens,” Molinari said. “Tomorrow morning, that puts me in a world of hurt, right? Because now all of a sudden, all my open cages are gone. So we have to see what our options are: Do we have an adoption scheduled to go out? Could we put an emergency plea out there for people to foster?”

Five dogs were in danger of being euthanized on Friday, according to an announcement the shelter shared over the weekend. It’s not an easy decision for them — and most times, Molinari explained, the shelter can connect with partners or rely on the public for help — but animals with severe behavioral problems, health problems, old age, and a long time spent in the shelter are more likely to be in trouble.

Luckily, free adoptions and fostering were able to save those dogs this week. For more than six months, adoptions from the county shelter have been half-off to encourage people to bring an animal into their home — and their hearts.

“Thank God euthanasia is going to be the sixth or seventh option, or whatever it might be,” Molinari said. “It’s not the first. But it is in play, in consideration, if things don’t work themselves out.”

But why are things so dire this year? It’s a question with many answers, and one that’s not unique to Mendocino County. Hanzlik pointed out that, with tumultuous workforce changes and high burnout rates in the veterinary field, animals can miss out or be delayed on critical health procedures such as spaying and neutering. This means too many pets for infrastructure to accommodate — even in more rural communities.

“There’s so many pets that have entered the animal population across the United States that our entire system’s being overwhelmed, including the vet offices,” she said.

Martin believes education is a key piece of the issue, and encouraged pet parents of Mendocino County to check out the Eileen Hawthorne Fund for Animals and Mendocino County Care-A-Van for free or discounted vaccines and spay-and-neuter.

“I really think a lot of it is education,” she said. “People don’t realize that there are organizations out there to pay for neutering of your cat. I think there’s just a lot of people that don’t realize it’s not the 1970s anymore. We don’t just let our animals breed.”

Inflation has also taken a serious toll, Molinari explained. He said shelter numbers were lower than usual at the height of the COVID-19 pandemic, but that some of those adoptions essentially amounted to “long-term fostering” when the “new sneaker effect wore off” — or owners were forced to return the animals due to financial hardship.

It’s also costly for owners coming to the shelter to pick up animals who may have been brought in by concerned citizens or law enforcement. For example, impound fees for first-time offenders are $70 for animals that haven’t been spayed or neutered ($25 less if they have), plus an additional state-mandated fee of $60 for un-altered animals, and $20.60 for food and care each day. Molinari tries to be flexible on these expenses on the first go around, as well as on other necessary services.

“We promote responsible pet ownership here,” he said. “So, if people need food, if they’ve fallen on a hard time, we can offer some free assistance. If they need some vaccinations, we can probably offer some assistance — we do have some grant money that we’re able to play with in certain areas. We’d rather do those little small things, and keep that pet with that person and in that home, then for them just to say, well, I can’t do it.”

But while veterinary costs, care, and food for pets can be overwhelming for their owners, caring for animals in the shelters costs money, too.

“What the clinic makes does not even cover the clinic itself,” Martin explained. The State of the Ark Thrift Shop, which the shelter runs, just about pays staff’s wages. “We do so much for animals, and we do a lot of low-cost [procedures]. We really are losing money every month — we run quite a high deficit every year, that we make up for by endowment. We’re about $100,000 to $150,000 shy of what we need [each] year to be able to do everything we’d like to do.”

How can people help? First and foremost, by giving shelters and their employees grace.

“The ultimate goal is to go into 2023 with a clear picture of what our capabilities are,” said Hanzlik, adding, “I think it’s really important that the community understands that we’re looking at longevity.”

Shelters always benefit from volunteers, cash, and supply donations — but often the most necessary supplies or acts at a given shelter are specific to the moment.

She also encouraged people to properly socialize their new puppies, making sure they meet lots of new people and other dogs to stave off behavior problems later. Molinari agrees that this ahead-of-time work is important.

“If people would just take a couple minutes every week [to] check their fencing and talk to their kids about closing doors, and get their animals vaccinated,” Molinari said, “a lot of times, the little things will prevent the big thing for some animals coming into our shelter.”

Keep up with these shelters and get in touch:

5 thoughts on “Inundated with animal surrenders, Mendocino shelters in ‘quite a whirlwind’”