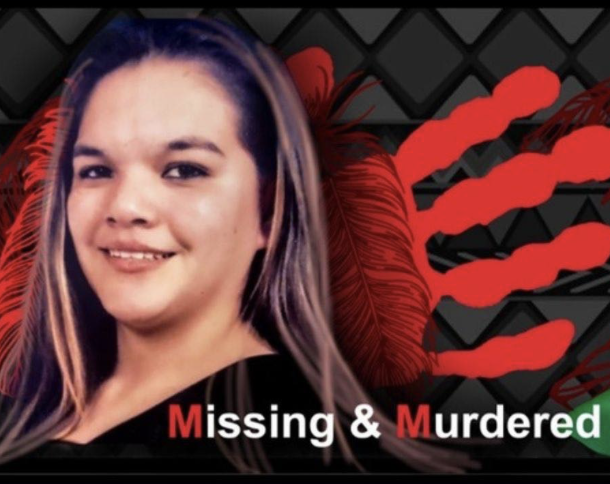 Portion of the planned mural image in Ukiah featuring Britton.

Editor’s note: Friends and family members of Britton’s who would like to contribute a handprint to the mural are invited to visit on Wednesday, May 26 from 12:30 p.m. – 3 p.m. and Thursday, May 27 from 10 a.m. – 3 p.m. or at an arranged time. Community members are also invited to contribute or volunteer. For more information please contact Amalia Abrojena at [email protected]

MENDOCINO Co., 5/24/21 — A month ago in Covelo, on April 22, Khadijah Britton‘s family celebrated her 27th birthday —  the fourth they have celebrated without her.

Britton has not been seen by her family since she was spotted by a witness, who reported her being forced into a car at gunpoint by her former boyfriend Negie Fallis in early February 2018. Tragically, her disappearance is just one of a number of missing or murdered Indigenous Mendocino County residents, who are part of a larger phenomenon across the North Coast, California and the country, of Indigenous women facing disproportionate rates of intimate partner violence and higher rates of kidnapping, violent crime, and murder.

Starting this week, Britton’s likeness will be the center of a new mural being painted in downtown Ukiah, calling for greater awareness and justice for the Missing and Murdered Indigenous Women’s (MMIW) movement, as part of a larger series of murals planned by the Ukiah Valley Youth Leadership Coalition.

Work on the MMIW mural in Ukiah started today, May 24, at the Arbor Building on North State Street, owned by Redwood Community Services. Through Thursday, May 27, visiting artist Shane Grammer and the Hope Through Art Foundation will guide local youth through the painting process thanks to a collaboration between Arbor Drug Free Communities Coalition and youth-led Ukiah Valley Youth Leadership Coalition.

“We had the idea of using Khadijah Britton’s likeness to bring a more local narrative to this pervasive global problem,” wrote Amalia Abrojena, the Drug Free Communities project coordinator in the event announcement. Britton’s family and community members will be also participating in the event, which will be hosted by Katie Ray, Gabe Ray, and Haley Pulawa.

Grammer will begin the mural process by teaching the local youths how to lay out the grid and painting techniques, taking several days to complete the entire process, Abrojena explained in an interview. There will be an opportunity for friends and family of Britton to include their handprints on the mural on Wednesday and Thursday, or by arrangement. On Thursday, May 27, there will be an unveiling ceremony with speakers, local dancers, food, and more from 6 p.m. to 8 p.m.

May 5 is now nationally recognized as Missing and Murdered Indigenous People’s Day, and many of the missing and murdered Indigenous people in Northern California were remembered earlier this month with events held in Ukiah, Redwood Valley, and across the state.

The Hope Through Art Foundation and Grammer recently collaborated on another MMIW mural in Upper Lake on May 5, featuring Vanessa Niko, a 35 year old mother and member of the Habematolel Pomo tribe, whose former partner and father of several of her children is facing trial for her 2017 killing. In March, Grammer also painted a similar mural in Chico featuring a local woman and highlighting the MMIW movement. The Ukiah mural was also initially planned to kick off May 5, but was temporarily delayed by permit approvals.

The Ukiah Valley Youth Leadership Coalition is supported by the Arbor Drug Free Communities Coalition, and “is youth led and projects are youth driven,” Abrojena explained. Two additional social justice murals by the Ukiah Valley Youth Leadership Coalition are also in the works, and the youth participants have selected LGBTQ+ and “immigration and families” as the themes, and the group is currently looking for locations and financial support for the projects.

Britton is one of numerous local Indigenous women, as well as men, who have disappeared or whose murders remain unsolved in Mendocino County and the North Coast, as well as across the country, and her family has emphasized that her story has much in common with other missing and murdered women. Here in Mendocino County, these include Nicole Smith, Rachel Sloan, and Belle Rodriguez.

In recent years, friends and family members have organized searches and marches, offered rewards, and held events to bring attention to their unsolved cases, including travelling to MMIW events in Sacramento, San Francisco, Chico, and other larger demonstrations to speak out about their loved ones and the larger issue. This May, events were held in Ukiah, and by the Consolidated Tribal Health Center in Redwood Valley, including speakers from Round Valley, the Hopland and the Little River Bands of Pomo, and the Wilton Rancheria.

Statistics from the Department of Justice show that four out of five Native American women are affected by violence, and face homicide rates ten times higher than the national average. At least 500 MMIW cases have been counted nationally according to a 2018 report, but some estimates put the numbers well into the thousands. A July 2020 report from the Northern California-based and Indigenous led Sovereign Bodies Institute found that the highest concentration of such cases in Northern California were in the Humboldt, Mendocino, and Del Norte region, and that Northern California represented 62% of the cases in California, with California having the highest number of documented MMIW cases nationwide. The report also noted the difficulty in tracking such cases due to inconsistencies in local and state reporting, records and data collection, and law enforcement jurisdictions.

The MMIW or MMIP movement has been growing nationally for several years, and in April, newly appointed Secretary of the Interior Deb Haaland created a special investigative unit to pursue justice for missing and murdered indigienous women, and May 5 was made a national day of awareness of the movement by President Joe Biden.

Friends and family have organized extensive searches, and a substantial reward of $85,000 for information leading to finding her, plus another $25,000 for a conviction in her case, is still available. Britton’s case brought the involvement of the Federal Bureau of Investigation, which joined the Mendocino County Sheriff’s Office for the second time in a press conference this February, calling for anyone to come forward with any information.

Other murdered women in Mendocino County whose case remains unsolved include Nicole Smith, of the Manchester Point Arena band of Pomo. Smith, a mother of three, was shot and killed in her home in November, 2017. Her children were also shot at during the attack, and although a $25,000 reward has also been offered for information in her case, no one has been charged in her death. Smith’s family members spoke out about the difficulty in getting information from local law enforcement and justice for Smith during an MMIW March 5 event in front of San Francisco City Hall this year, and her sister Bernadette Smith also shared her story during a recent discussion held by the Sovereign Bodies Institute on California families in the MMIW movement.

The murder of Rachael Sloan, a 25 year old Native woman from Laytonville, also remains unsolved after her body was discovered in 2013 inside a refrigerator near the Eel River on Highway 162, although she was not identified by law enforcement for several years later. Belle Rodriguez, another young woman from Round Valley, was murdered in 2014.

The Ukiah Valley Youth Leadership Coalition is supported by the Arbor Drug Free Communities Coalition, and the year round program is open to young people in the Ukiah Valley and surrounding areas, with a variety of ongoing projects. “We have youth involved because they are passionate about making a difference in the community, some can get credits in school for participating, or community service hours,” Abrojena explained. For more information, contact [email protected] or call 707-390-0262.

The full announcement for the mural event and flyer can be found below.

Editor’s note: If you are struggling with domestic violence, or know someone who is, there are resources that can help. In Mendocino County, Project Sanctuary provides free resources and support. They have temporarily suspended some visits due to the COVID-19 pandemic, but can be reached 24/7 at (707) 463-4357 for the inland county area, and (707) 964-4357 for the coast.

The Arbor Drug Free Communities and Ukiah Valley Youth Coalition is partnering with Shane Grammer and The Hope Through Art Foundation to create a mural highlighting the Missing and Murdered Indigenous Women (MMIW) movement. This mural will honor Khadijah Britton, one of the MMIW sisters who has been missing since February 7, 2018 and member of the Round Valley Indian tribes.

“I am honored to be working with the Ukiah Valley Youth Coalition on such an impactful mural. The youth are dedicated to raising awareness about MMIW, and Khadijah, who has been missing since 2018. These youth are leaders in our community,” shares Amalia Abrojena, Drug Free Communities Project Coordinator.

The mural project will begin Monday, May 24 at 810 N Sate Street with a completion ceremony Thursday, May 27 6-8 p.m. Khadijah Britton’s family and the Ukiah Valley Youth Coalition will host the completion ceremony with feather dancers and native singers as a tribute to Khadijah along with family and tribal members. The community is invited to celebrate with this group adhering to all Covid-19 safety precautions.

The Ukiah Valley Youth Coalition is a youth-led and driven program. These youth have identified several projects they want to see in the community with the Social Justice Mural as the first. The youth are passionate about these topics and feel it’s important to raise awareness in their community. The Arbor Drug Free Communities Coalition is a grant funded program promoting healthy lifestyles, including the reduction of youth substance abuse, by creating community connections and opportunities for youth empowerment.

If you are interested in supporting this mural, they are still seeking donations for food and lodging. Donations can be sent directly to Redwood Community Services, P.O. Box 2077, Ukiah CA 95482 with a note that it is to be credited to the DFC Mural Project. For more information or to volunteer, please contact Amalia Abrojena at [email protected]