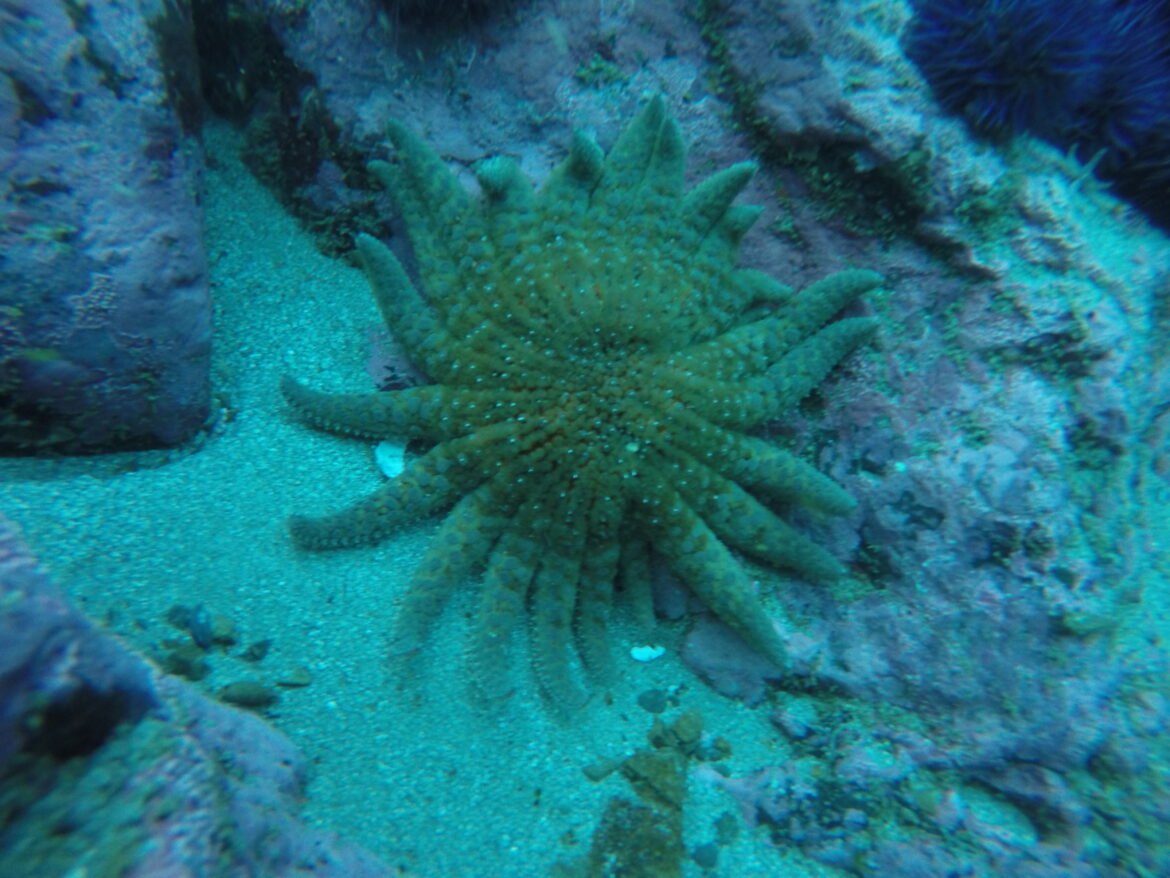 Grant Downie estimates the sunflower sea star he saw was around 12 inches across. (Grant Downie/@fv_crazyhorse)

FORT BRAGG, CA, 12/9/22 — On Tuesday, after harvesting some red urchin, commercial urchin diver Grant Downie swam along the seafloor to check out conditions at a spot a couple miles south of Noyo Harbor. The seafloor quickly turned to purple urchin barren, a typical sight in Mendocino’s starkly changed underwater habitat. But then Downie saw a creature he hadn’t come across in more than six years: a sunflower sea star.

The sunflower sea star, or pycnopodia helianthoides, is an apex predator of sea urchins along the west coast of North America, from Mexico’s Baja California to Alaska. The 2013 sea star wasting disease that affected many star populations was catastrophic for pycnopodia: a recent Roadmap to Recovery report estimates that the sunflower sea star has since experienced global decline of around 94.3%.

Spotting any sunflower sea stars at all along the stretch of coastline from Mexico to Washington has become extremely rare — and after sea otters were hunted almost to extinction in the 1900s, pycnopodia was left as the only urchin predator in Mendocino’s kelp forest ecosystem. As such, its disappearance has contributed significantly to our exploding purple urchin population and resulting loss of bull kelp, which urchins eat. Because bull kelp are a keystone species in their habitat, the sea star die-off had disastrous consequences for the entire coastal ecosystem.

Given that landscape, Downie was shocked and excited to come across the 12-inch star. He recalled, “It was a really nice, healthy starfish. I mean, it was amazing to see. It really was.”

He took several photos and videos to share with scientists and agencies working to identify the causes of pcynopodia mortality and attempt population recovery. Though Downie is now also a kelp restoration specialist who works closely with the Nature Conservancy (TNC) and California Department of Fish and Wildlife (CDFW), as well as a recently appointed Noyo Harbor commissioner, it was diving in the ocean to sell urchin both wholesale and on the commercial market that led him to the encouraging discovery.

“I was doing my job in our struggling industry,” he said. “My background in restoration and being knowledgeable of what’s going on, as soon as I saw it, it triggered me and I was like, ‘Nobody’s seen one of these in ages. I have to get this recorded.’”

The predator has been almost totally absent from this area — particularly the fully submerged subtidal zone — for nearly a decade, TNC Kelp Restoration Director Tristin McHugh explained, leaving sea urchins off our coast unregulated by natural predation. In 2022 there were reported sightings in Oregon and Humboldt County, but none here.

“We’re creeping up on eight years of this predator being undetected by divers,” she told The Voice. “So this is a major, major win for the subtidal community and for people in general, knowing that sunflower stars can in fact be in this space.”

Another glimmer of hope came in 2021, when a scientist walking along the Mendocino Headlands spotted a couple pycnopodia in the intertidal zone at low tide. That discovery was part of what prompted The Nature Conservancy’s STAR pilot project with the Noyo Center for Marine Science along the Mendocino Coast in the summer of 2022, McHugh said. The Noyo Center’s robust, enthusiastic team of volunteers scoured seven different sites along the coast, searching once each month in June, July, and August and documenting their findings.

“What better partner is there to search with the community and have them physically go look for the star?” McHugh said. “It not only increases the number of people looking, but also allows an opportunity for education of this apex predator as being super valuable for our ecosystem.”

No one found pycnopodia during this summer monitoring, but the search efforts provided a wide cross section of the North Coast’s sea star population. Since a variety of stars were impacted by wasting disease, documenting so many — from ochre stars to bat stars to leather stars — still made the project a success.

“In one day we would find 1,500 different sea stars between all of the locations,” Discovery Center Docent Jo-El Houle told The Voice. She added, “On top of that, everyone’s learning about our kelp situation, sea urchin barrens, and the sea star wasting disease — and it’s all part of the same story. And when people walk into the Noyo Center, we can educate them about that story, about the sea star and the health of the whole ecosystem along the Mendocino coast. And hopefully they become better stewards.”

How you can get involved

Another monitoring plan in the works aims to pull in any interested members of the public — so Downie’s sea star finding couldn’t have come at a better time, McHugh said. California Academy of Sciences and TNC have teamed up to host the Solstice Sea Star Search, a sea star documenting campaign running from Dec. 20-23 with a special emphasis on pycnopodia. They’re encouraging the public to head out at low tide, look around in some tide pools in their area, and document any sea stars on the iNaturalist app.

If you have the good fortune to spot a sunflower sea star, send an email to the iNaturalist observation link and report the sighting on the UC Santa Cruz Sea Star Observation log.

The road to pycnopodia recovery

The rapid pace at which pycnopodia died off from our ecosystem also means that scientists, government agencies, and nonprofits have been racing to keep up. Developed from work by the Pycnopodia Recovery Working Group, the Roadmap to Recovery hopes to address several of the key issues in helping sunflower sea star populations to rebound, including maintaining and enhancing monitoring, expanding research on disease mitigation, navigating permitting requirements, and bolstering efforts toward captive rearing and outplanting.

Findings from the Friday Harbor Laboratories’ small-scale sunflower sea star captive rearing program in the Salish Sea have been promising in terms of identifying best practices for raising stars in captivity and better understanding their life cycle and feeding behaviors. This Washington lab, currently the only one hosting a pycnopodia captive rearing program, is working with TNC to engage other accredited facilities interested in rearing stars. Although complex and in its early stages, captive rearing via aquaculture is an attractive solution to maintain genetic diversity, act as insurance against further population decline, and set the stage to potentially restore species numbers in the wild.

Although kelp restoration methods such as urchin removal by hand, urchin trapping, and enhancement using a kelp seed-soil mixture called “green gravel” are also being explored, nothing works as simply and efficiently as the real thing.

“That feeding element that a sunflower star provided — it was also fear,” McHugh explained. “Chemical responses of a predator in the system elicit wild behaviors from urchin, like physically moving away from that star. So that can’t be replaced, other than by them.”

When Downie first found the star, several purple urchin were moving away from it along the rock. He said many of his followers on social media were confident that, with the ocean’s volatility, he wouldn’t be able to find the sea star again. But he returned the next day and found it bedded down in a crack near the same spot.

“These are all pretty large purples,” he said. “So if it were to have left that area, it probably would have made a clear highway that I probably could have almost traced. We didn’t leave a lot of harvestable urchins in the area, [but] I’d love to go back and look again to make sure it’s there in a week or so.” He added, “Knowing that they’re out there, it’s just more of a chance for a comeback. This is the natural predator that we need.”