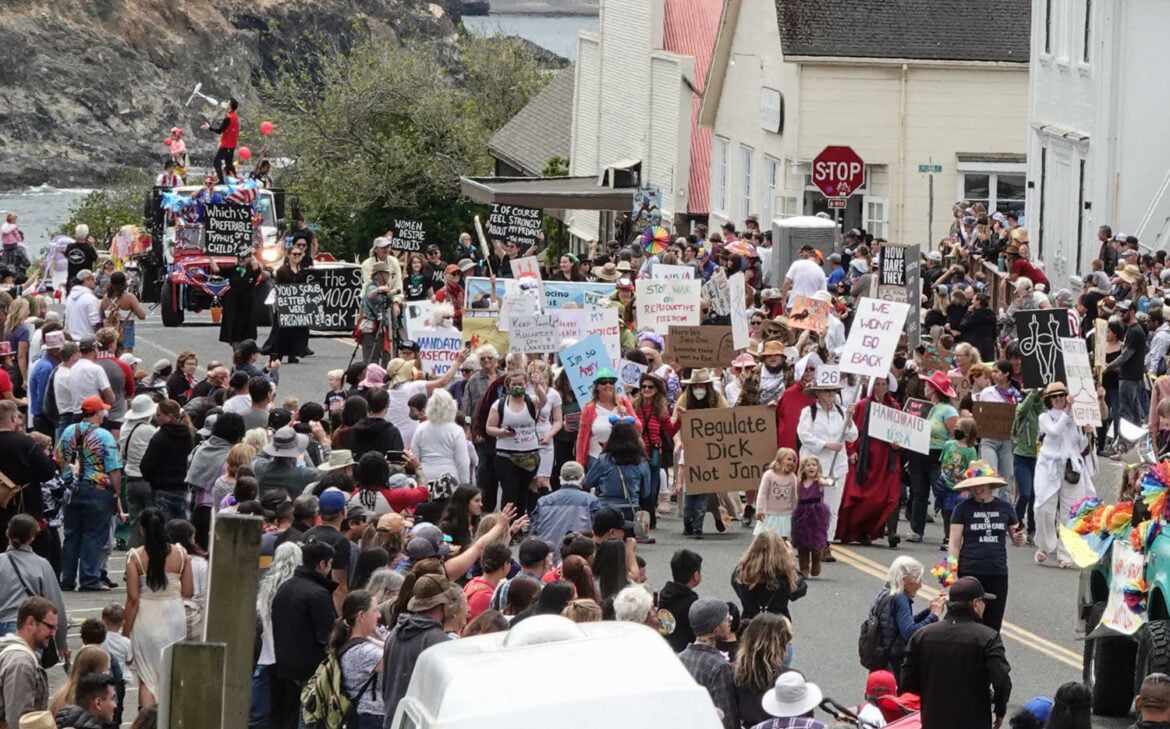 Dozens in the Mendocino parade sharing messages in support of reproductive rights won the award for "Most Patriotic."

MENDOCINO, CA, 7/07/2022 – Mendocino’s iconic Fourth of July parade returned this year after a COVID-19 hiatus, with a 2022 theme of “Forward, Together” and a crowd lined up and down Main and Lansing streets to cheer for floats and community members. The parade’s judges came from Highlight Gallery, Mendocino Presbyterian Church, the Seagull Inn, Visit Mendocino County, KOZT The Coast, and Mendocino Fire District – and the list of local sponsorships was more than twice as long.

Mendocino County’s parade is known for its unique spirit – and across the board on Monday, political advocacy and reproductive rights rose to the top.

Several dignitaries driving antique cars demonstrated their support for abortion access by waving signs; Green Fields, an energized musical float that took home the accolade for “Best Band,” brandished signs saying “we are on Native land” and “mind your own uterus”; Mendocino Theatre Company promoted its upcoming show with quotes from The Moors such as “I make my own decisions” and “I of course feel strongly about my privacy,” proclaiming on a large banner, “Like the Supreme Court, The Moors will take you back to the 1800s.”

Dozens also gathered to march in a contingent called “We Won’t Go Back,” waving signs advocating for reproductive freedom – and with some at the front even wearing Handmaid’s Tale costumes. These marchers took home the day’s award for “most patriotic.”

Congressman Jared Huffman and Mendocino County Board of Supervisors Chair Ted Williams rode in a truck together, waving to those lined up to watch the parade.

Other floats leaned into the weird and wonderful; Albion’s fire department won the day in the fire department category by saving the life of a mock ailing parade-goer, lifting him up onto a stretcher and carrying him into the vehicle. Marchers with Big River Kayak performed an elaborate routine in their kayaks culminating in a song: “Oh big river, our beautiful river, you make us happy, when skies are gray.” They were named “Most Creative.” The Mendocino Coast Audubon Society took home the accolade in the animal category for a fun routine complete with someone flapping around in a bird costume. Kids Fairy won big in the youth category, and Russ and Dazy’s 1929 Dodge sedan claimed “Best Vehicle.”

“I grew up in a small town, but we took our parades seriously,” said Sarah Nathe, a board member and volunteer with the Kelley House Museum, where many parade attendees enjoyed refreshments and music by the Mixed Nuts. “I just appreciate this.”

Monday was a big fundraiser for the Kelley House Museum and also a big party – a source of both funds and joy that’s been on hold during the pandemic. Attendees also enjoyed music and dancing on Ukiah Street after the parade, as well as a performance in Rotary Park by the Puppet Company from Oakland’s Fairyland.