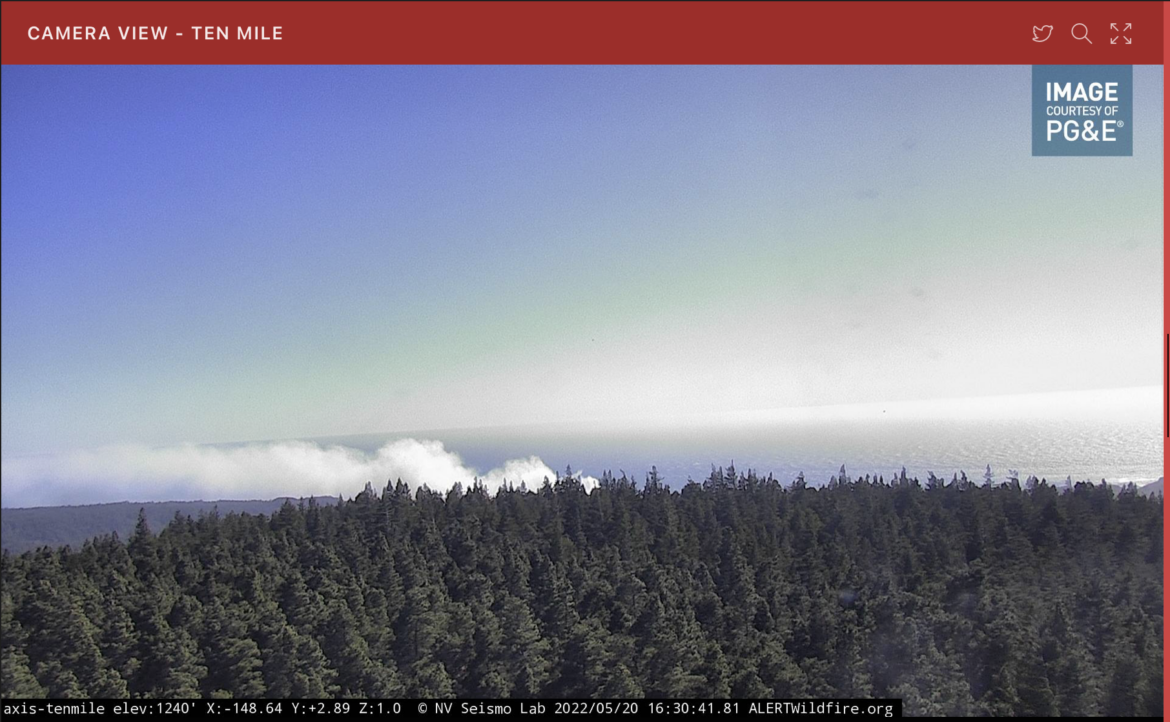 Update 9:20 p.m. — The mandatory evacuation order in the Schooner Gulch area in the vicinity of Point Arena has been lifted, according to the Sheriff’s Office, and fire crews will remain patrolling on site overnight to monitor the situation on the Owens Fire. MCSO had previously expected to keep the evacuation orders in place overnight.

The evening Cal Fire incident report puts the fire at 36 acres and 5% containment, and lists 50 structures threatened, but none damaged or destroyed. There are 155 personnel at the scene from a number of agencies.

Update 8 p.m. — Forward progress has been stopped on the Owens Fire, south of Point Arena, but road closures remain in place for approximately one mile on Highway 1. Mandatory evacuation orders will remain in place overnight, according to the Sheriff’s Office, and residents who need assistance with shelter should call 707-510-1556. Here’s the most recent Nixle update from MCSO.

Smoke may be still be visible in the vicinity, as well as south in Sonoma County, but there are no additional fires being reported in that region. Fire crews remain on the scene doing fire suppression and mop up, and working on increasing containment. However, the air response has been called off. Current estimates are that the fire reached 30 acres in size.

Update 4:50 p.m. — Mandatory evacuations are being issued from Bill Owens Road south to Schooner Gulch Road, and to Highway 1, for a mile radius. The Sheriff’s Office is recommending that residents evacuate to the east, to Ten Mile Cutoff Road.

Update 4:45 p.m. — Evacuations may be issued for residents near Schooner Gulch and Highway 1, according to scanner traffic, and so people living in the vicinity of the fire may want to prepare to leave if they feel unsafe or receive a notification.

MENDOCINO Co., 5/20/22 — Highway 1 is at Bill Owens Road closed south of Point Arena due to a wildfire. The Mendocino County Sheriff’s Office has issued a Nixle alert, and drivers should avoid the area if possible to allow emergency responders to access the scene.

According to current Information on the the California Highway Patrol (CHP) incident page, the the road closure will be between Schooner Gulch and Bill Owens Road.

The incident is being called the “Owens IC.” Initial reports indicated that the fire initially started on the Owens ranch, and has reach approximately 12 acres in size as of the time of publication, but this has not been confirmed with official sources. A distant view of the fire is visible on the “Alert Wildfire” camera network on the Ten Mile camera view.

You can read the Nixle here — we’ll update as more information becomes available.

With temperatures heating up, we recommend our readers prepare for wildfires! The Mendocino County emergency information website is below, and we’ve also put together a list of important local info and resources for you to prepare for emergencies — check it out here. Fore more hands on info, there will be a wildfire safety expo (and homebrew festival) this Saturday, May 21 in Boonville.