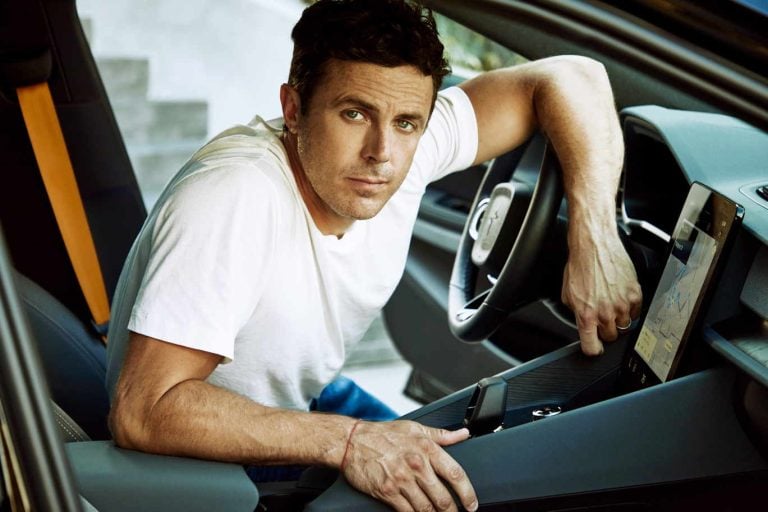 Casey Affleck in his Polestar 2.

MENDOCINO CO., 11/18/22 — Sweater weather is officially here, and I don’t know about you, but my social media feeds are filled with cups of hot cocoa, high-calorie Thanksgiving side dish recipes and colorful persimmon photos. Despite the onslaught of all things cozy, none of those things are featured in this week’s Mendocino Flavors!

But — if you still need to buy your Thanksgiving turkey, you can find our list of where to purchase your turkey and other meal necessities here. Don’t feel like cooking? Here is our round-up of eighteen restaurants in the county open on Thanksgiving. Have a happy Thanksgiving and thank you for reading The Mendocino Voice!

Academy Award winning actor Casey Affleck visits Mendocino vegan restaurant
In August, actor and filmmaker Casey Affleck partnered with Polestar, an electric car brand produced by Volvo, and the posh publication Haute Living to drive a new Polestar 2 from Los Angeles to Portland. Early this month the Oscar and Golden Globe-winning star of Manchester by the Sea published a story about his journey in Haute Living.

On the fourth day of his trip, he traveled up Highway 1 to arrive in Mendocino, where he settled into an overnight stay at the Stanford Inn by the Sea, where room rates start at $351 a night. The inn, which owner’s Jeff & Joan Stanford describe as the first vegan resort in the United States, was a natural fit for Affleck, who has been vegan and an animal rights activist since 1995. During his visit, Affleck toured the 10-acre property, including the organic gardens that serve as a seasonal food source for the resort’s Ravens plant-based restaurant.

Affleck ate dinner and breakfast at the Ravens, which he called “the best fine dining experience” he had during the six-day road trip. As for his breakfast, Affleck described it as “one of the best vegan breakfasts I’ve had that wasn’t home-cooked.”

New ramen shop opens in Willits
Willits continues to be a hotbed of new dining options with the opening of Cube Ramen Bar in the former It’s Time location. It’s the third new restaurant announcement in Willits in a month. According to an interview with Willits Weekly, Cube Ramen Bar is operated by chef-owner Taylor Pedersen, formerly of Ukiah Brewing Company. A California native, Pedersen lived in Japan as a teenager, where he fell in love with ramen. Pedersen eventually studied at the French Culinary Institute in Manhattan and taught himself the art of ramen.

The current menu includes tonkatsu (pork-based) ramen and a vegan ramen with myriad protein options. A gluten-free option will soon be available. While the current menu is small, Pedersen plans to expand it soon. Ramen fans can also purchase broth, noodles and other ramen ingredients to enjoy at home. Cube Ramen Bar is open Tuesday through Sunday, 11 a.m.-8 p.m., 35 E. Commercial St., Willits.

Sundays are for shuffleboard and pizza in Willits
Speaking of Willits, Flying Dog Wood Fired Pizza & Vinyl launched its new Shuffleboard Sunday event this past weekend. Taking place every Sunday, Shuffleboard Sunday is a competitive afternoon of table-top shuffleboard with a cash prize for the winner. Flying Dog will serve pizza, beer and wine. Registration is $5 per person and sign-ups start at 4 p.m. with games starting at 4:45 p.m. (707) 459-4747, 65 S. Main St., Willits.

Thanksgiving bake sale to benefit senior programs in Willits, November 23
The Willits Harrah Senior Center is hosting a Thanksgiving bake sale with proceeds benefiting programs offered at the senior center, including free community meals, bingo, health and wellness activities, and more. The center will have freshly baked pies, breads, cookies and more for sale. It’s a great excuse to let someone else do the baking this holiday! 8:30 a.m.-1 p.m., Wednesday, November 23, (707) 459-6826, 1501 Baechtel Rd., Willits.

Fall brews and winter warmers released at breweries across the county
Local breweries throughout the county are releasing their barrel-aged and stout beers. These limited production, rich and creamy beers are perfect pairings for an afternoon of board games at one’s favorite pub or a cozy night at home watching a movie. Barrel-aged and stout beers are often higher alcohol than their lighter liquid cousins, so drink responsibly!

Anderson Valley Brewing Company released its Huge Arker (15.5% ABV and 88 IBU) beer earlier this month. The beer is aged in bourbon barrels for twelve months and has notes of honey, molasses, rich dark chocolate, coffee, vanilla and dark fruits. Huge Arker won gold at the US Open Beer Championships, Brussels Beer Challenge, and the Australian International Beer Awards. At 15.5% ABV, it’s one of the highest alcohol beers in the United States and is illegal in seven states due to its alcohol content.

Northspur Brewing Co. has two barrel-aged offerings at its Willits taproom right now. One is aged in rye whiskey barrels and the other in bourbon barrels. The barrels are from Barber Lee Spirits in Petaluma. Later this month, Northspur plans to release a third brandy barrel-aged beer using barrels from Alley 6 in Healdsburg.

Small — but equally important — news bites
Ukiah Brewing Company is now operating under winter hours: 11:30 a.m.-9 p.m Thursday through Tuesday and 5-9 p.m. on Wednesdays. Point Arena Pizza now offers indoor dining and has expanded its menu to serve soups, including vegan soups. The pizzeria will be closed for fall break from November 23-25. Jenny’s Giant Burger in Fort Bragg has reopened its indoor dining area, just in time for chilly weather.

Have food or drink news you’d like me to consider for inclusion in my weekly news round-ups? Email me at [email protected].