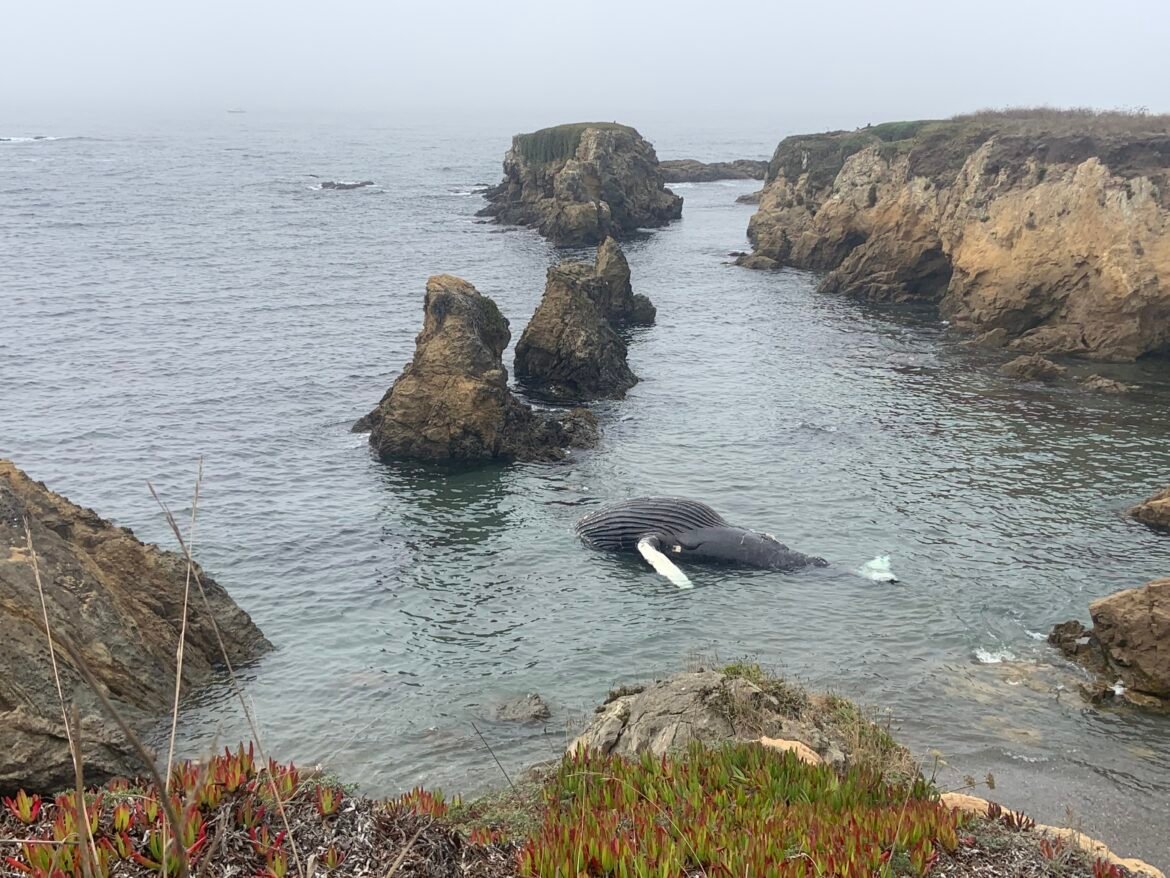 A 26.5-foot humpback whale that washed ashore in Fort Bragg will remain on the beach unless nature acts otherwise. (Kate Fishman/The Mendocino Voice)

FORT BRAGG, CA, 9/14/22 — A dead, 26.5-foot juvenile humpback whale that washed ashore near Glass Beach in Fort Bragg on Monday will not be removed, the Noyo Center for Marine Science announced Tuesday. The whale had washed up at the bottom of a steep cliff, so safety in studying it was a primary concern — and Noyo Center staff warned the public not to approach the animal.

“The ideal situation, in a case like this, is to leave the animal where it is and let it decompose naturally,” Interpretive Facilities Manager Trey Petrey of the Noyo Center told The Mendocino Voice. “Because not only are you creating a heavier footprint by dragging it out to sea, but it’s basically creating its own little ecosystem right there. There are a lot of other things that will benefit from it — of course, it’s not going to smell as nice.”

The whale was also difficult to study because at high tide, it is submerged in surf; its body “could shift in direction and pose a serious risk to an individual near the animal or attempting to collect data from the whale,” Noyo Center representatives detailed online. Staff from the Noyo Center were able to collect “Level A” data about the whale at low tide — such as its measurements — and may take further research samples of the whale’s tissue or baleen as they continue to evaluate the situation.

“We always have a set of protocols as far as taking samples and then sending them to the California Academy of Sciences or the Marine Mammal Center in Marin County, so that they can study the samples and try to determine the cause of death, the age of animals, any number of other things,” Petrey explained. “That is really valuable to try to do, to not only learn about that animal, but also learn what’s going on in general in terms of other marine mammals and patterns involving deceased mammals.”

This is the third whale to wash up along the Mendocino coastline since May, when a dead beaked whale was discovered in Jug Handle State Natural Reserve. In August, the Noyo Center attempted to tow a rare sperm whale in, before it sank; the Center may attempt to study the process of whale fall — when a carcass falls to the seafloor and becomes a sort of cornucopia for other organisms — around the sperm whale.

“If you do look back over the last two years, there have been a lot of what they call ‘unusual mortality events,’ with whales and with other marine mammals,” Petrey said. “That’s always something to consider when they’re taking samples and trying to determine the cause of death.”

Several threats to California’s whale populations are currently addressed in marine policy, but several aren’t, according to a paper on “managed and unmanaged whale mortality” published in June (and co-authored by Noyo Harbormaster Anna Neumann). The directly human-caused threats of entanglement, vessel strikes, noise, water quality, and marine debris are factored into existing policy, the paper details — but whales are also impacted by human activity that leads to climate change and habitat degradation, contributing to the “largely unaddressed” threats of nutritional stress, disease, and predation.

Petrey said no cause of death is currently known in this humpback’s case.

He also emphasized the importance of the Noyo Center’s Stranding Agreement with the California Academy of Sciences, which grants the Center an enhanced ability to study the marine life found on Mendocino shores.

“It’s sad that these things happen, but you have to take advantage of them and try to reap the benefits of learning more about the ocean, [including] how to repair some of the damage that has happened as a result of human interaction,” Petrey said.

The Noyo Center urged the public never to approach a dead marine mammal of this size, saying it is not only dangerous but also illegal under the Endangered Species Act and the Marine Mammal Protection Act to remove any parts of a whale, unless authorized by the National Oceanic and Atmospheric Administration.