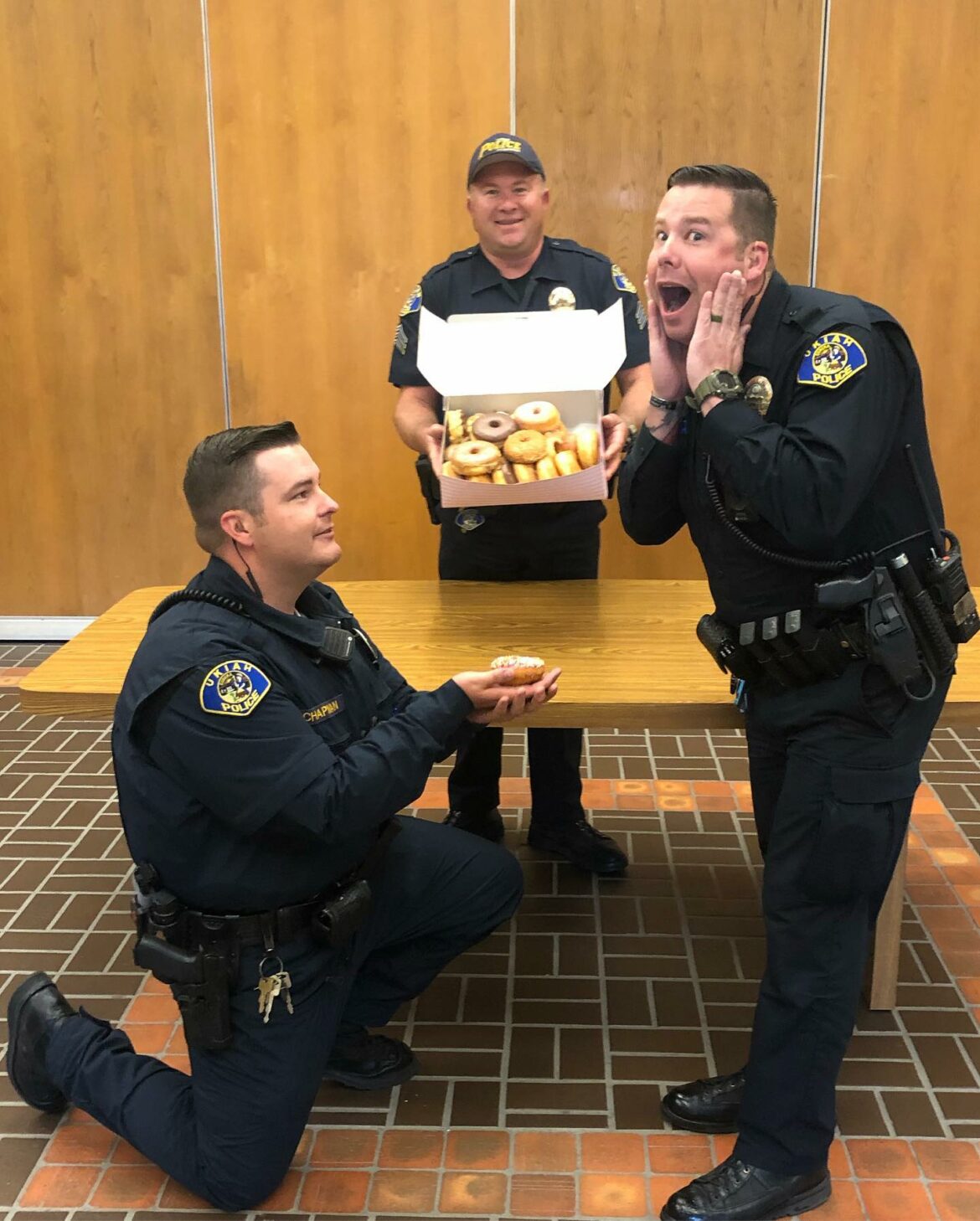 UKIAH, 6/2/22 — Former Sgt. Kevin Murray is out on bail awaiting trial on felony sex assault charges, but he’s still a central figure on Ukiah Police Department’s social media. During the spring of 2019 the department posted a number of humorous photo shoots on Facebook depicting Murray posing with livestock, including a small pig, and with donuts. All of these images are still publicly available on the department’s timeline as of this writing.

Department critics have called the photos “unprofessional” and “a waste of taxpayers’ time and money.” UPD has stonewalled information about the photos, refusing to tell the Mendocino Voice who posted them online.

Chief Noble Waidelich, currently facing allegations of domestic abuse in a pair of civil lawsuits, appears with Murray in one of the donut shoots on May 17, 2019. Three men took part in this mock same-sex marriage proposal: Officer Brett Chapman appears in front of Murray on bended knee with a donut instead of a ring. Murray looks surprised in one shot, then ecstatic in another. Waidelich stands in back holding an open box of donuts.

The wedding proposal was near the end of Murray’s funny photo social media blitz. In the beginning, February 23, he detained a goat. March 15, he kissed the piglet. April 4, 2019, was another donut shoot. Then April 19, he appeared with a baby chick in each hand. Kevin Murray gets chicks; we get it.

The comment section is broadly supportive of the officers depicted, but several Facebook users have complained about photos of Murray in writing with no departmental response. Policy 388, which governs the department’s use of social media, prohibits posting materials that could “compromise or damage the mission, function, reputation or professionalism of the Ukiah Police Department or its members.” It also states that department personnel “may” review the UPD’s timelines on at least an annual basis and report back on “inappropriate content,” among other concerns.

Policy 388.5 states: “Any member who becomes aware of content on this department’s social media site that he/she believes is unauthorized or inappropriate should promptly report such content to a supervisor. The supervisor will ensure its removal from public view and investigate the cause of the entry.” That process would need to be initiated by a member of the police department, however. The Mendocino Voice filed a request with the City of Ukiah seeking documentation of any such report from officers asking to remove content, but the city says that no such records exist.

Policy 388.3 states that only personnel authorized by the police chief can post to the department’s Facebook page, and Policy 388.7 directs police personnel to retain “public records generated in the process of social media use.” The Voice has requested access to those records, but for now city officials say that no records relating to these posts exist other than the public posts themselves. City officials provided a list of users currently authorized to post on UPD’s Facebook account, which includes Chief Waidelich and dispatch\records manager Tracey Porter. None of this sheds light on who posted these photos.

Facebook retains and provides information about the individual who posts each piece of content on a page, displaying it clearly for each separate one, but that data is only available to users who have permissions to manage those posts.

“They think they are funny,” Amanda Carley texted. “What a waste of taxpayers’ time and money.”

“I believe most of that department feels untouchable. There have been no repercussions for most of their conduct for years,” Carley wrote.

Madisyn Carley, Amanda Carley’s daughter, said it’s hard to believe UPD hasn’t taken down pictures of Murray and Waidelich out of respect for their alleged victims. Madisyn Carley was a child when the alleged abuse of her mother occurred, but she’s 20 now, engaged and studying criminal justice in Southern California. Madisyn’s filed her own lawsuit (Madisyn Carley vs. Noble Waidelich, Dec. 10, 2021) alleging that watching Waidelich repeatedly beat her mother harmed Madisyn as well.

“Looking at the photos which depict him and Murray together, I cannot help but wonder whether they bonded over their misconduct,” Madisyn wrote in an email Thursday. “What are the chances there are more officers or high ranking officials like them spread throughout the community’s government?”

In a series of emails Tuesday, The Voice asked city staff if they could at least say who posted the photo of Waidelich and the donuts. That information is likely available to any staff member with access to UPD’s Facebook page, and potentially subject to disclosure under the California Public Records Act. If the city is having trouble finding that information, Facebook has published a helpful tutorial entitled “If multiple people help manage my Facebook Page, how can I see who published something?” For now, however, the City of Ukiah and the Ukiah Police Department aim to keep those details secret if possible.

“There are no further responsive records (other) than what has already been provided,” City Clerk Kristine Lawler wrote in an email Wednesday morning. “This PRA is considered closed.”

If there are no further records to disclose it’s possible all of the photos included in this article may have been posted in violation of Policy 388.7 — the part where UPD personnel have been directed to retain public records generated by their social media posts. If they did retain those records in accordance with department policy, they have refused to divulge them so far. Interested parties can read Policy 388 in its entirety starting on page 282 of the 737-page UPD Policy Manual, updated in February 2022. Previous versions are available on the city’s website.

Regardless of who posted these photos — or who held the camera — none of this appears to have hindered the careers of anyone involved. Out of the three officers who participated in the funny photoshoots of 2019, the only one who hasn’t been promoted yet is Officer Brett Chapman. Murray made sergeant in August 2020, (pictured below) just months before his arrest. Waidelich was promoted to chief in October 2021.

Isabel Siderakis vs. City of Ukiah