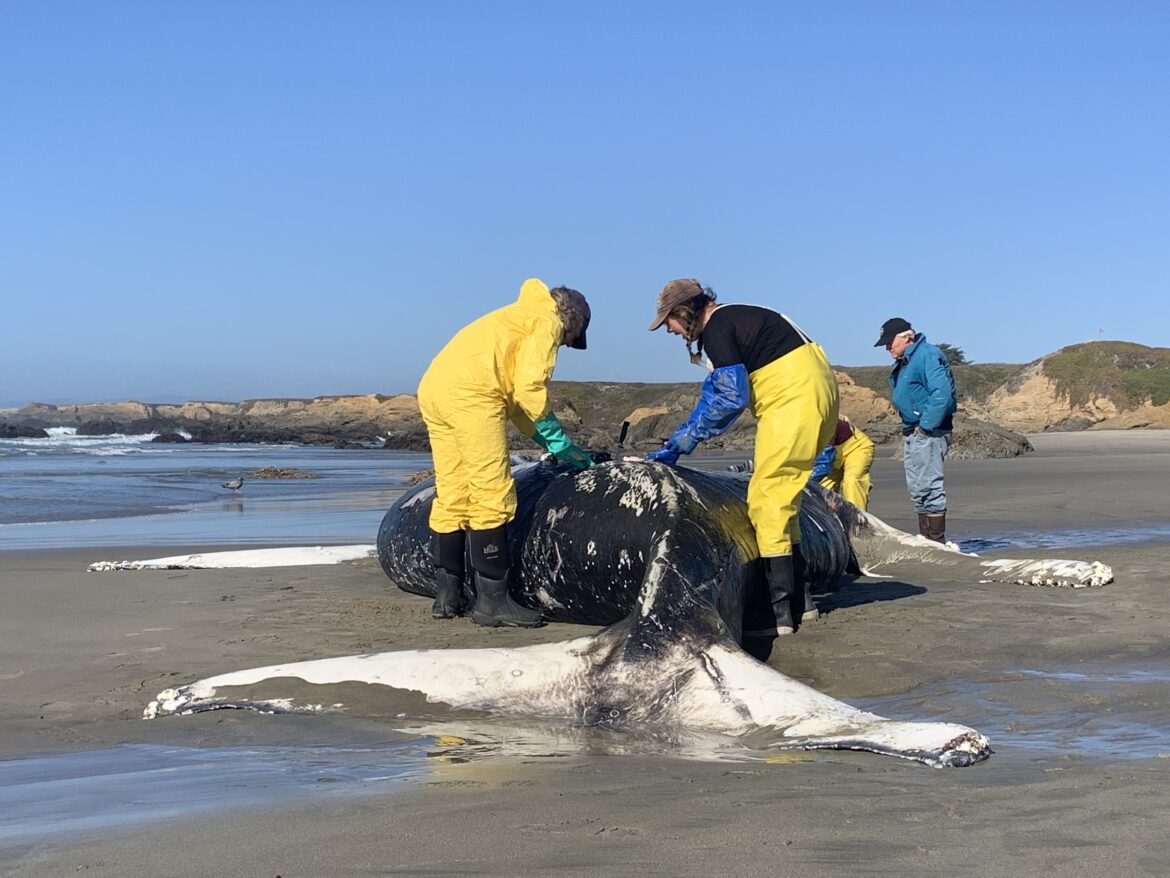 MENDOCINO Co, CA, 12/29/22 — “Climate win” is a complicated phrase. In my short time  covering environmental issues in Mendocino County, I’ve been struck by how much our infrastructure, science, policy, and business must race to keep pace with human-caused climate change that irradiates through — literally — the air we breathe. The impacts of this rapid change are inextricable from daily life here.

That’s why, as we look back on 2022, we want to dive into some of Mendocino’s biggest climate stories — not through the lens of unequivocal wins, but embracing that while victories are hard-fought and slow to come, the issues that impact our community demand long-term attention.

The goal? That we’ll be informed and accountable in making the future choices that matter most. From wildfire recovery and sea level rise to drought and kelp restoration, here are six Mendocino climate issues to keep an eye on in 2023.

Restoration efforts for Mendocino County’s iconic bull kelp, a keystone species that supports our shoreline ecosystem and has declined dramatically over the past decade, made big headlines in 2022. Kelp is critically important — not only for pH balance and carbon sequestration in the water, but in the balance of ecosystems that support key Mendocino industries like the red urchin fishery.

“The last five years have been the hardest years for me since I started,” commercial urchin diver Marcos Aban told The Mendocino Voice. Due the overpopulation of purple urchin, which contributed to kelp die-off and for which there’s no commercial market, Aban has been forced to dive deeper and deeper to harvest viable urchin.

Efforts to restore kelp continue to color many aspects of coastal life: Commercial divers’ by-hand culling of overpopulated purple urchin saw promising results in terms of kelp resurgence by the time an Ocean Protection Council grant ran out this summer. UniFest celebrated urchins and the delicacy of their roe, while also educating about restoration efforts on the North Coast. Scientists are gathering information to steer restoration efforts by mapping kelp beds using drones and an AI tool called the Kelp-o-matic. And the Noyo Center for Marine Science hopes to one day establish aquaculture and breedstock programs out of its eco-friendly Slack Tide Café in Noyo Harbor.

Another bright spot came in December when urchin diver Grant Downie spotted a sunflower sea star. The sole remaining natural predator of purple urchins, this species has been all but entirely absent from the coast since a sea star wasting disease in 2013.

“I was doing my job in our struggling industry,” Downie said. “My background in restoration and being knowledgeable of what’s going on, as soon as I saw it, it triggered me and I was like, ‘Nobody’s seen one of these in ages. I have to get this recorded.’”

Drought is always a defining story in California; 2022 saw some of Mendocino County’s most affected towns and water districts both inland and on the coast working to find solutions.

Mendocino’s Civil Grand Jury reported this summer that Redwood Valley County Water District (RVCWD) has struggled to provide adequate water to its residential and agricultural customers for decades — and is inhibited in seeking relief by some $6.85 million in debt owed to the federal government. Now, RVCWD is involved in early discussions of a consolidation project bringing together a single regional water provider from the southern end of the Ukiah Valley to the northern end of Redwood Valley.

RVCWD general manager Jared Walker told The Mendocino Voice that, if successful, this could be “the biggest project [to] take place in the greater Ukiah Valley area in decades.”

Meanwhile, the coast is making strides toward greater water resiliency. Fort Bragg — which often sells water to the smaller village of Mendocino — plans to build three reservoirs on a newly acquired parcel of land, adding millions of gallons to the city’s water storage capacity. The city is also looking into wave energy-powered desalination. In the words of Mayor Bernie Norvell, water crises demand that we “get started yesterday.”

Mendocino — which was mentioned on the travel guide Fodor’s “No List” this year in a section exploring water crises in the American West — is pursuing water security efforts of its own. The Mendocino City Community Services District has plans for a new 500,000-gallon storage tank to increase its emergency water reserves and a feasibility study of potential future water systems.

The highly trafficked village strives to educate, too — as GoodLife Cafe & Bakery owner Teddy Winslow said, “Obviously, we all want the tourism and the income — that’s not a question. … But I do want those tourists to maybe not take long baths every single day because it’s not their water or, you know, just have a mindless attitude.”

This summer brought a significant milestone for Jackson Demonstration State Forest (JDSF), as the California Natural Resources Agency presented a vision for tribal co-management of the redwood forest, the largest in California’s demonstration forest system. Forest managers committed $10 million to remove revenue-generating pressure for logging this year and hope to update the 10-year management plan ahead of schedule to focus on climate science, restoration ecologies and economies, and further exploration of “the multiple benefits of restoring redwood forests.”

But after Cal Fire lifted its delay on timber harvest, activists aligned with the Coalition to Save Jackson Forest and Pomo Land Back have questioned whether “true equal co-management” is on the table. They continue to call for a change to JDSF’s commercial forestry mandate — and six people were arrested at a protest in Sacramento outside CNRA headquarters.

In the meantime, Cal Fire and JDSF are proposing fuel breaks throughout the forest and extending into communities alongside it, in hopes of increasing wildland firefighters’ ability to make a stand in coastal communities in the event of wildfire. A 2011 paper found that “fires stopped at fuel breaks 46% of the time, almost invariably owing to fire suppression activities.”

PG&E has filed to decommission the Potter Valley Project, proposing a 30-month timeline to create its final plan — which may or may not involve dam removal. The migration season’s first salmon counts were reported from Cape Horn Dam in November — despite Chinook salmon spotted in this upstream location, experts say the population is still at less than 10% of historic level.

Dam removal in the Klamath River was approved in November of this year, in a move widely regarded as a massive victory for salmon restoration. Yurok Chairman Joseph James said, “The people have earned this victory and with it, we carry on our sacred duty to the fish that have sustained our people since the beginning of time.”

Local advocates hope similar population recovery could occur in the Eel River. This year, a coalition of five fishing and conservation groups sued the Federal Energy Regulatory Commission (FERC), saying the Potter Valley Project’s conditions for “take” — or harm to protected Chinook salmon and steelhead trout populations — are no longer authorized following the recent expiration of its 50-year license and the expiration of a 20-year Biological Opinion from the National Marine Fisheries Service.

“This litigation is the first step in making sure FERC and PG&E protect Eel River salmon and steelhead while working toward dam removal,” said Alicia Hamann, executive director of Friends of the Eel River.

Mendocino County was fortunate to be spared by large wildfires this year; small fires that did break out were contained by Cal Fire and other supporting fire departments in a few days or less. That made 2022 a great year to reflect on wildfire recovery and prevention.

In fall of this year, at least seven homeowners had applied to rebuild their homes after 2021’s Hopkins Fire. Disaster Recovery Field Operations Coordinator Travis Killmer told The Voice, “I know from speaking to various survivors that I think everybody at this point has secured another place to stay.”

Killmer spearheaded a survey on Mendocino County’s most destructive fires of the past five years, cataloging impacts and outstanding unmet needs from the Redwood Complex Fire, Mendocino Complex Fire, August Complex Fire, Oak Fire, and Hopkins Fire. At the time of that first fire in 2017, Mendocino County didn’t have a disaster recovery program. at all; Killmer said critical feedback is “the only way we’re going to be able to make any changes here and improve the process.”

The Voice also caught up with Danilla Sands, whose organization United Disaster Relief of Northern California (UDRNC) has moved to a new Ukiah location and increased its ranks to a team of almost 30 volunteers. UDRNC hopes to one day buy the building they’re housed in and be secure in providing long-term relief to residents impacted by disasters.

“If [everyone in Mendocino County] donated $3, we’d be set,” Sands said, adding, “If each one of those people invest in their community, and know that someday they could possibly be impacted by a manmade or natural disaster or their family and friends or coworker [could be], or maybe they already know someone that has … it would be ours.”

In neighboring Lake County, the ecologically minded hand crew of Tribal Ecorestoration Alliance (TERA) is working to restore “good fire” to the land using cultural burns that indigenous communities had conducted for centuries.

“Just the act of bringing back fire really is historical, especially for Robinson [Rancheria] and other tribes here in Lake County, because that was taken away from us,” Board Chair TeMashio Anderson said. TERA is exploring training workshops with some Mendocino County tribes, too.

Sea level rise is a big climate consideration coming down the pike for coastal communities; scientists predict an increase in sea level of as much as five feet by 2100 along California’s coastline.

Mendocino County recently received a multimillion dollar grant from the Coastal Commission to update its Local Coastal Program (LCP) for the first time in 30 years. The planning roadmap currently does not mention sea level rise, though much of our local infrastructure could be vulnerable.

Point Arena has hired a firm to study the small town’s infrastructure through the lens of environmental hazards and sea level rise, an effort that could “lay the groundwork for a more comprehensive study of the whole watershed,” City Planner Scott Perkins said.

“Instead of just pouring more rip-rap in the water, let’s do these living shorelines, be innovative, and take an opportunity to just do something that’s not totally normal,” she said in an interview this summer. “I would really love to see some sort of seaweed or algae project be established that is gonna have those bioremediation capacities.”

With a population of around 90,000, Mendocino County has the experimental capacity to test solutions that might seem impossible in large cities. What’s more, our actions around climate issues now have a notable impact on residents’ lives. As State Controller Betty Y. Yee said, in a Blue Economy Symposium and Learning Festival hosted in Fort Bragg this May, “If I were on the side of reviewing grant applications, I would be thrilled to look at grant applications from this area because of all the efforts being made and the partnerships being built, as I see all of you coming together.”