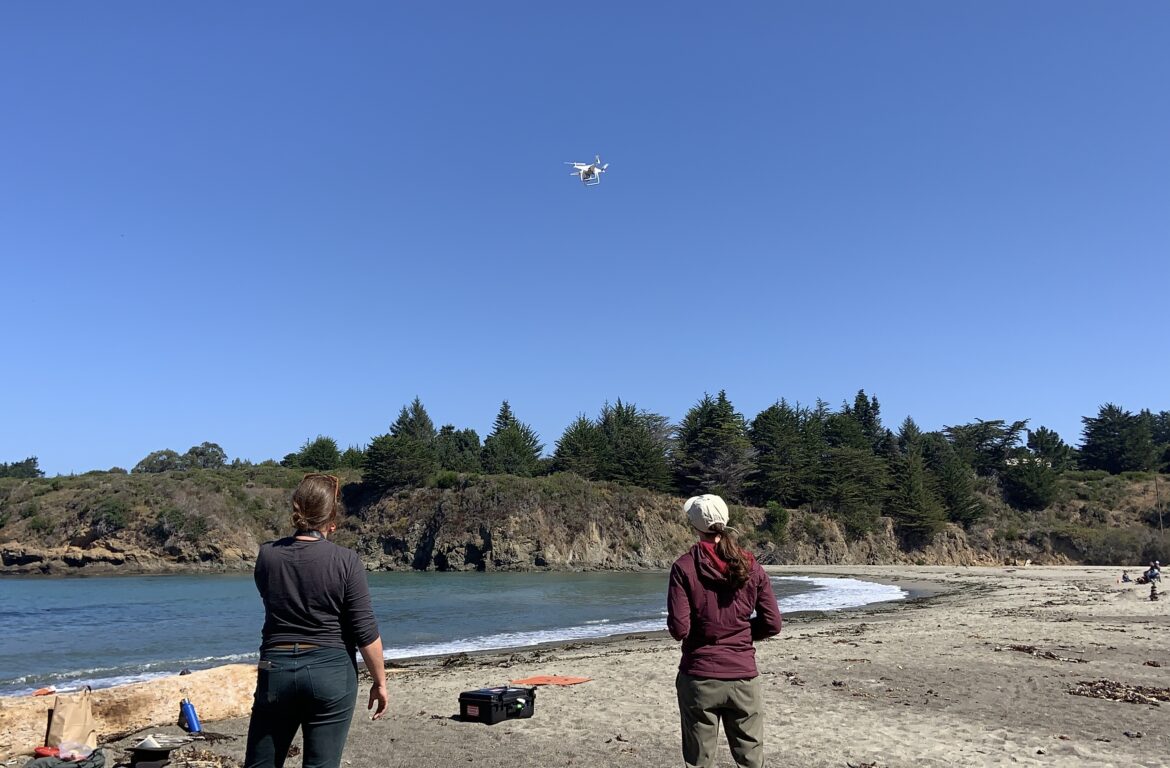 Researchers from The Nature Conservancy and the Hakai Institute watch as their DJI Phantom 4 V2 drone ascends to photograph bull kelp off a Mendocino County beach. (Kate Fishman/The Mendocino Voice)

MENDOCINO Co, 9/26/22 — On a beautiful day at the beach in Caspar this September, a pair of researchers launched a small drone into the sky from shore. Flying up to 400 feet into the air at around 24 miles per hour, the drone collected dozens of images each second as it moved over the water on a prescribed flight plan, watched closely by its two on-the-ground pilots.

The flight took less than 10 minutes; in just a few minutes more, a brand new AI tool called the “kelp-o-matic” identified every pixel of the Mendocino Coast’s dwindling bull kelp visible from above. After some quality assurance, an up-to-date map of Caspar Cove’s kelp cover was complete.

“The drone’s little camera is able to pick up super sparse patches of kelp — which is pretty important, because that’s kind of all that’s left,” Vienna Saccomanno, an ocean scientist with The Nature Conservancy, told The Mendocino Voice. “There are satellites that orbit the planet that take a lot of pictures, and we can pull those data and see big patches of kelp. But some of those satellites miss these little patches, and it turns out that these little patches are probably very important for releasing spores back into this environment.”

In a paper published last week, Saccomanno and others on her team found that kelp canopy along the surveyed coast of Northern California had decreased by 85.8% from 2016 to 2019, when study with drones first began. Bull kelp, a cornerstone of our ecosystem sometimes described as underwater redwoods, have experienced catastrophic population decline over the past decade; Local, regional, and national environmental organizations are attempting to restore kelp with evolving initiatives to remove over-populated purple urchin and seed more growth in hospitable areas.

“We have limited time and conservation dollars, so we want to be as data-driven as possible,” Saccomanno said.

She added, “It’s clear that human intervention is needed to reset this ecosystem. So the big task now is to know, where should we be doing restoration? What tools should be applied? … And so we fly priority sites up and down the coast and then create maps for stakeholders, decision-makers, et cetera.”

Saccomanno and others on her team spend a couple of weeks in September and October — when Northern California’s waters are warmest and kelp is healthiest — traveling to Marine Protected Areas and other critical sites throughout Mendocino and Sonoma counties to document the year’s bull kelp populations. The project’s surveys represent the largest known marine-focused studies using unoccupied aerial vehicles (UAV) in California — and until this year, producing final results used to take months.

“Historically, what we’ve done is we’ve gone out to the field, collected all of this drone imagery, and gone back to our labs to upload that imagery,” Saccomanno explained. “We get hundreds and hundreds of images and we stitch them together. … With the old way of doing it, it was pretty accurate, but it would sometimes take us months to create maps for all of these sites.”

Enter the Hakai Institute, a scientific research institution in coastal British Columbia. Luba Reshitnyk, a geospatial research scientist, was experiencing a similar struggle to Saccomanno’s in her own kelp monitoring efforts.

“I’ve always felt like, by the time my field season is done, I get around to making maps and say, ‘Oh, my God, okay, it’s April already. I have to get ready for doing this for another year,’” she told The Voice. “And you’re really limited in getting into the more interesting questions like: Why is kelp changing? How is it changing?”

One morning, a colleague who specializes in computer science was chatting with Reshitnyk about AI advancements in detecting specific features in images. Knowing she already had tons of kelp images to feed into an algorithm, she wanted to try developing a kelp detection tool. The kelp-o-matic was born. It’s free, publicly accessible, and takes between two and nine minutes to identify kelp in an image.

What’s more, the tool seems to work well across different geographies and species of kelp; it’s been applied in Canada, here in California, and could be deployed for kelp monitoring along other coastlines, too. Some people with land near priority sites for kelp surveillance have developed partnerships with scientists; For example, the Kashia Band of Pomo Indians collaborated with researchers to map kelp off their coastline, and in turn The Nature Conservancy was able to share their maps with the tribe.

Accessibility of the maps is very important to researchers. Data from 2019 and 2020 is available through the recent paper, “Using unoccupied aerial vehicles to map and monitor changes in emergent kelp canopy after an ecological regime shift”; and plans are underway to upload up-to-date maps to the California Department of Fish and Wildlife’s MarineBIOS site. Collating this data to observe where kelp recurs year after year — what Saccomanno calls its “persistence” — will help scientists continue efforts to restore its population.

“If you’re looking at a map like this wondering, ‘Where should I protect and do restoration efforts?’ — probably the spots where you see it again and again,” she said. “There’s some special stuff there. Something good is happening. Let’s protect it and give it a fighting chance.”

Our past reporting on Northern California’s kelp ecosystem: