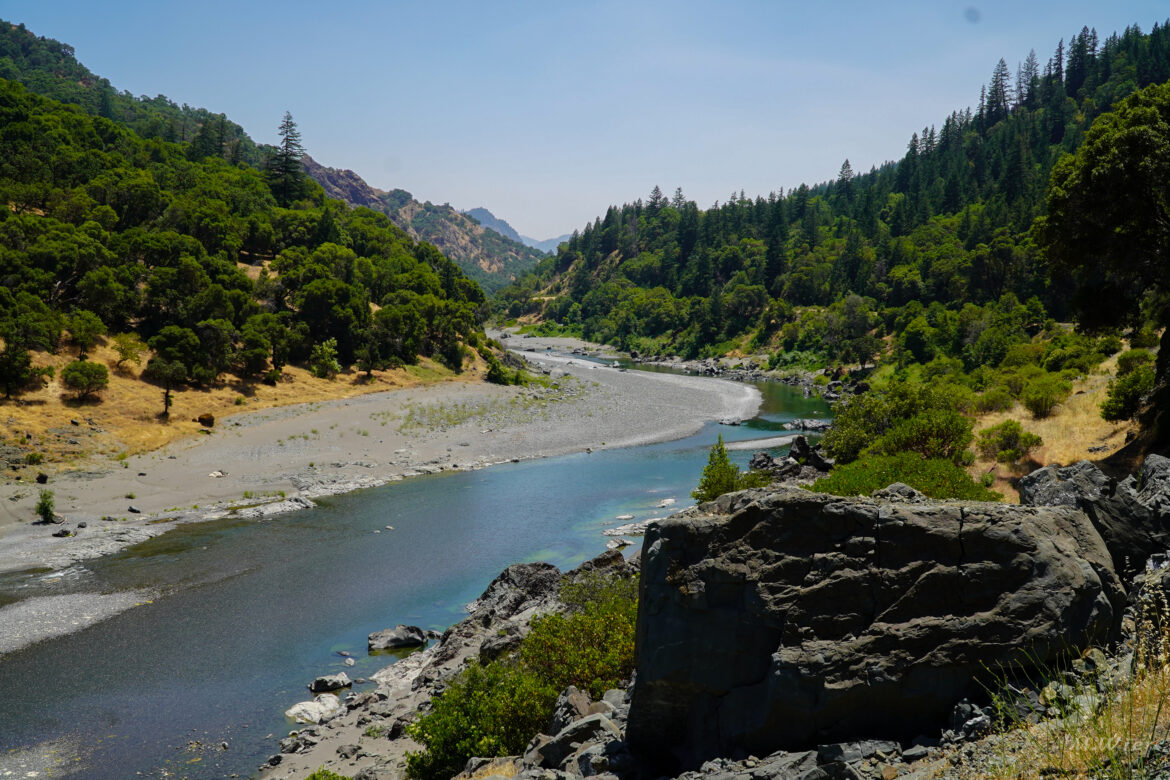 The Eel River is a key habitat for salmon and trout protected under the Endangered Species Act.

The Potter Valley Project is a hydroelectric power plant — more than a century old — designed to generate power and divert water flows from the Eel River to the Russian River. The plant utilizes two dams: Cape Horn Dam at the Van Arsdale Reservoir and Scott Dam at Lake Pillsbury. The future of these dams remains murky and controversial, as government agencies, nonprofits, tribal nations, agricultural stakeholders, and other California citizens all have a vested interest in water rights and land stewardship in the two watersheds. For example, some Lake County residents oppose removing Scott Dam because of Lake Pillsbury’s community significance and value as a reservoir.

But those on all sides agree that the Eel River is a critical habitat for California’s populations of Chinook salmon and steelhead trout, making the fate of these species a significant factor that hangs in the balance when it comes to decommissioning the Potter Valley Project. Critics of the utility company argue that factors caused by the presence of the dams harm these threatened and endangered populations, but PG&E has not yet said whether decommissioning would involve removing the dams.

Friends of the Eel River, California Trout, Trout Unlimited, Pacific Coast Federation of Fishermen’s Associations, and the Institute for Fisheries Resources filed a notice of intent to sue PG&E under the Endangered Species Act on April 15, the day after PG&E’s 50-year license over the Potter Valley Project expired. The notice provided at least 60 days warning, giving PG&E a chance to respond to its allegations; the environmental groups hoped that the utility would take steps to eliminate the outlined conditions of “take,” or harm caused to fish, prior to actual litigation.

Although their representatives cannot speak to the specifics of recent dialogue with PG&E, it seems that hope has not manifested.

“We’ve essentially been rebuffed by PG&E, who across the board has been negligent in their caretaking of the resources they were put in charge of,” California Trout’s Legal & Policy Director Redgie Collins told The Mendocino Voice. “We think the best solution is to then move quickly and efficiently towards the disposition of this project.”

The impetus for their lawsuit, which has not yet been filed, stemmed in part from red flags raised by the National Marine Fisheries Service (NMFS), the government authority on marine life, in mid-March. NMFS wrote to the Federal Energy Regulatory Commission (FERC) expressing concerns that project operations were negatively impacting salmon and steelhead survival and requesting to consult on the project again under the ESA. NFMS said its Biological Opinion and incidental “take” statement on Potter Valley operations, authorizing some conditions for take back in 2002, did not cover the activities of Cape Horn Dam and its associated infrastructure; fishway maintenance; and flow operations to achieve fish passage at the passage facility. NMFS also said that FERC’s subsequent approval of Potter Valley Project modifications and operations did not undergo ESA consultation or consultation with regards to Pacific Coast Salmon Essential Fish Habitat protections.

NMFS alleges that this resulted in unauthorized impacts on fish — and also said its 20-year opinion authorizing the Project’s conditions for take elapsed April 14, writing, “The 20-year duration of the proposed action is a central component of the Opinion.” As such, in 2022, the agency requested that eight different interim protective measures be incorporated into the project to protect fish during this period of flux prior to decommissioning, including implementing a water temperature management plan, an adult escapement monitoring plan, and a stream gauging plan. More details on NMFS’ request are available in their letter.

“PG&E is not aware of any evidence in the voluminous record associated with the Project indicating that Project operations under the license are causing an unauthorized take of listed salmonids,” Paul Moreno, Marketing & Communications principal for PG&E, told The Mendocino Voice in a written statement. “There are a multitude of adverse influences along the approximately 160-mile-long Eel River corridor that affect salmonids and PG&E believes its operations benefit salmonids by storing and providing water that otherwise would not be available for release, particularly during dry seasons.”

The suing environmental groups counter that the project limits salmon and steelhead access to critical pieces of their habitat, closes fishways at key moments in their life cycle due to reduced water flows, encourages otter predation by virtue of fishway design, and facilitates inhospitable temperatures. Collins said they think NMFS’ protective measures would be a good place to start in rectifying the alleged harm to fish.

“I think [removing the Scott dam] would make a big difference for the fate of Eel River salmon and steelhead — there’s certainly a lot of other issues in the river that we need to deal with — but taking the dam out is by far the single biggest thing we could do to help fisheries on the Eel.”  Charlie Schneider, Trout Unlimited’s California North Coast coordinator, said in an interview with The Voice.

Further, their lawsuit would seek to prove that the expiration of the license and NMFS’ biological opinion mean conditions for take that were allowed under those agreements are no longer legal. But PG&E disagrees entirely, writing in a response letter to NMFS on July 11 that “​​the NMFS 2002 BiOp and [incidental take statement] do not have a 20-year term or any other expiration date.”

“It seems that they plan on doing exactly nothing more unless forced to, which is pretty disappointing, but not unexpected given PG&E’s track record,” Schneider said. As such, the groups are moving forward in preparing litigation. Collins said he believes the utility’s July 11 response was meant not just to respond to NMFS’ letter, but to refute a possible lawsuit.

“Their legal resources are immense and I thought the brief they wrote back to NMFS, directed towards us, was well-written and persuasive,” he said, adding, “The biological opinion is no longer valid. That’s a fundamental disagreement, and if we have to talk about it in a court of law we’re happy to do so.”

Also on July 11, PG&E submitted an initial timeline for its decommissioning process — which includes developing a clear plan in the next year. The utility plans to file its application for surrender and its decommission plan within 30 months after FERC’s approval of this timeline.

“PG&E has not made any determination with respect to its decommissioning proposal, including whether facilities will be removed or remain in place,” Moreno said. “There are many stakeholders with an interest in the disposition of the Potter Valley Project facilities, and PG&E’s schedule provides for opportunity for input from these stakeholders to inform PG&E’s ultimate decommissioning proposal.”

Collins was one of many partners to work on the Two-Basin Solution proposed by Congressman Jared Huffman’s Ad Hoc Committee in 2017, when PG&E began to explore relicensing the project. The committee’s primary goal was to facilitate improved fish passage and reliable water supply in partnership, in part through plans for the removal of Scott Dam and modification of Cape Horn Dam.

While PG&E eventually rejected the Ad Hoc Committee’s proposal over funding issues and a misaligned timeline to form a regional entity as the licensee, Collins said California Trout and other organizations still have the results of millions of dollars worth of feasibility studies. He hopes that PG&E will look to plans from the Two-Basin Solution in its decommissioning process — and also believes this prior work could shorten the utility’s proposed 30-month timeline.

“This project has the potential to be a historic dam removal project,” he said, adding, “Any way we can push PG&E on that 30-month timeline will be better, because every day we do not do that, fish on the Eel River suffer. PG&E basically let this entire region dwell on this and cooked up individual rivalries on purpose in order to get them a little bit less heat directly, but ultimately PG&E has the keys here, and if they want to move this process quicker, they can.”

The Mendocino Voice will provide updates on our website as the decommissioning process advances.

Note: Kate Fishman is a Report For America fellow covering the environment & natural resources for The Mendocino Voice. Her position is funded by the Community Foundation of Mendocino, Report for America, & our readers. You can support Fishman’s work here or email [email protected]. Contact her at KFishman@mendovoice.com or at (707) 234-7735. The Voice maintains editorial control and independence.