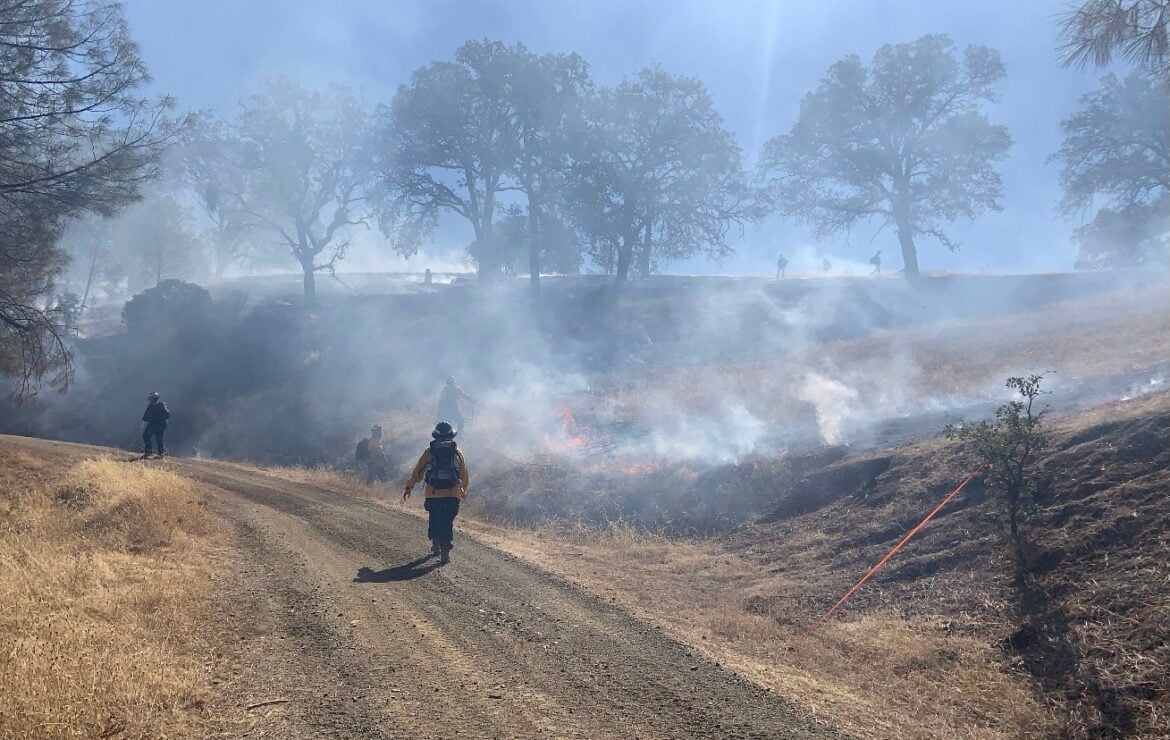 LAKE Co, CA, 11/10/22 — On a cold Thursday morning toward the end of October, some 70 people from Robinson Rancheria of Pomo Indians, Cal Fire, Lake County Cal-TREX, the United States Forest Service, and the Tribal Eco-Restoration Alliance (TERA) gathered to kick off a cultural burn on Robinson Rancheria lands. As TERA Crew Lead Stoney Timmons explained, part of the goal for that day’s prescribed fire was to tend to the slope’s legacy oak trees and cut down on the weevil population in acorns, a traditional source of tribal subsistence.

This is just one of numerous ecological imbalances stemming from more than a hundred years ago, when colonizers first restricted Indigenous tribes’ ability to steward land with burns they’d been conducting for centuries.

“The way the land was managed when fire was taken away, through the establishment of the US Forest Service and their belief that suppression was the best form of fire management, was basically a lack of understanding of fire ecology in our dominant society,” said TeMashio Anderson, TERA board chair and the former environmental director at Robinson Rancheria. “For my people, it’s about bringing back those relationships with the land.” He added, “The environment is one of the strongest factors for mental health.”

TERA, an organization based in Lake County working on the ancestral lands of the Eastern Pomo, Southeastern Pomo, Lake Miwok, and Wappo people, has been working to return cultural fire to the area — a goal finally accomplished some six months ago with a lakeside tule burn. TERA aims to put down this “good fire” throughout Lake County to cycle nutrients in the soil and cut down on vegetation buildup. The nonprofit hopes to offset the impacts of wildland fire, tree mortality, and other environmental hazards, while also building tribal capacity — through education, training, fuels reduction, planting, and more.

“We have our hands in everything, from working around our lake on invasive plant removal and restoring [Clear Lake] Hitch habitat in one of our creeks, to bringing fire back to the indigenous peoples here,” Timmons said in a phone conversation with The Mendocino Voice. “So it just means a lot, because we’re building that capacity with the tribal members around Lake County and sharing that knowledge amongst the tribes and amongst the community.”

Timmons had been working at Robinson Rancheria’s education center when his cousin told him about a project to cage young oak trees, protecting them from being eaten by deer. After he was hired, he met TERA Executive Director Lindsay Dailey, who told him he should join their flagship training for OSHA, First Aid, and CPR certifications.

TERA presented to Robinson tribal leaders a vision of holding the group’s first training on their lands. Now, TERA’s office is located there.

“The Robinson leadership was really instrumental in helping out to get things going,” board chair Anderson said. “With their support and me being in both roles as environmental director and a board member, I was able to help those conversations and bridge those gaps and show the importance of the overall vision of what TERA would like to support in the community.”

Prior to establishing TERA, Dailey had been interested throughout her career in a “reverential, reciprocal relationship with land” and “what that means as someone from a settler, European background, on land where I’m a guest.” Dailey joined a team of co-founders from Scotts Valley Band of Pomo Indians, Robinson Rancheria, and the USFS to found TERA, with the goal of establishing community-directed land stewardship efforts in the wake of numerous disastrous wildfires in Lake County; including the Ranch Fire, Valley Fire, and Forks Fire. She appreciates that TERA has secured funds to run its own crew with a “land care ethic.”

“It’d be a real bummer to train all these tribal members and then go send them to work with a tree-trimming business,” she said. She added, “What we’ve been doing, we now have funding to keep doing for a few years.” Dailey is also hoping to hire a second full-time crew of 10.

In one of its upcoming projects TERA, along with USFS and Clear Lake Environmental Research Center (CLERC), will work on the North Shore restoration project to begin repairing some of the most significant damage from the Ranch Fire, which began in Mendocino County but ultimately spanned four counties and over 400,000 acres over its 160-day burn.

“[The North Shore] is one of the largest wildland urban interfaces in the Mendocino National Forest, with the towns of Lucerne and Nice and Clearlake Oaks all over there,” said District Ranger Frank Aebly. “And we really didn’t want to see, in another 20 years, another repeat [wildfire] through there.”

Aebly has been an enthusiastic supporter of the vision that became TERA from its early grant application phase, and is excited to work with TERA’s crew in the upcoming North Shore restoration — which will include prescribed burning, pile burning, hand thinning, and/or mechanical treatment over a 40,000-acre area, and reforestation on 2,600 acres. He said Lake County residents have wanted to be involved in restoration in the area since the wildland fire’s fallout in 2018.

“This really was a triple bottom line thing,” he said. “Ecology, economy and culture — so it’s providing ecology jobs for the local community, and engaging the community and the culture to get that work done.”

Across the board, TERA leadership spoke in appreciation of their many agency, tribal, and nonprofit partners.

“We’re just trying to do our best to survive from what has happened to us historically — being relocated from our lands to where we are today, trying to eliminate us as people and our way of life,” Anderson said. “Just the act of bringing back fire really is historical, especially for Robinson and other tribes here in Lake County, because that was taken away from us. And just to be able to do that means a lot. A lot of the hard work of our elders in our communities or families before us, they’ve put in all the work and so I honor them for getting us here, and being strong for people to survive. And now I’m trying my best as a community member to stay strong for our next generation.”

TERA has more upcoming training opportunities for tribal members, Dailey said, and is also open to collaboration with additional tribes — “if we can support, folks are welcome to reach out to us!” Learn more about TERA online.