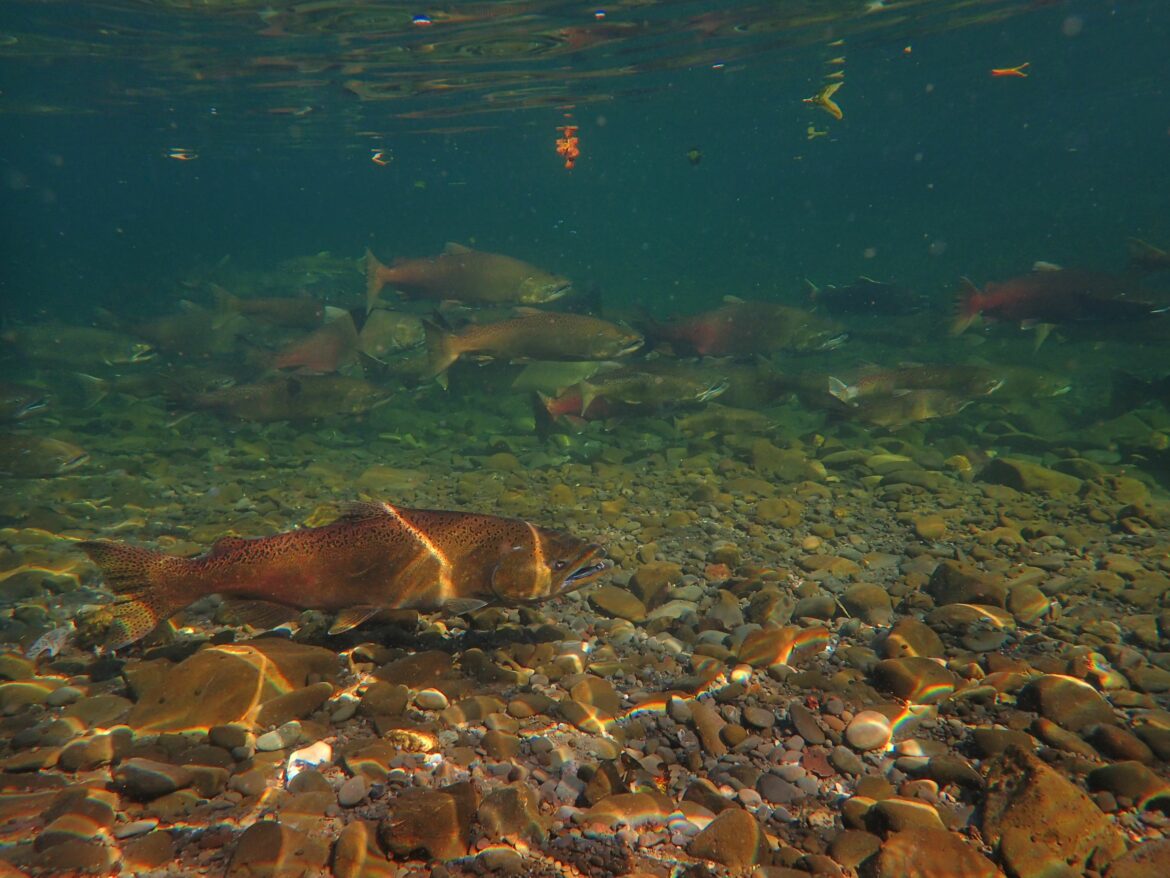 POTTER VALLEY, CA, 12/12/22 — According to updates from a PG&E senior aquatic biologist, 197 Chinook salmon have been recorded migrating upstream from Cape Horn Dam since the first fish of the 2022-2023 salmonid migration season were spotted at the Van Arsdale Fisheries Station on Nov. 7.

Biologist Andrew Anderson provides salmon monitoring data at the Cape Horn Dam throughout the season as a condition of FERC’s licensure of PG&E’s Potter Valley Project. Of the fish spotted so far this season, 51 were female, 81 were male, 35 were unknown, and 30 were jack (smaller fish that have spent less than one year in the ocean). Anderson has not observed any salmon carcasses as of his last report from Dec. 4.

Salmonid migration season in our region generally runs from November through January as fall-run Chinook salmon return to rivers in response to large winter storms, according to information from the California Department of Fish and Wildlife (CDFW). Salmon journey upstream through the Eel River to spawn in its upper tributaries. Patrick Higgins, managing director of the Eel River Recovery Project (ERRP), said in a recent report that due to insufficient flows in the Middle Fork Eel River, “spawning is now taking place in the main channel of the Eel River everywhere from below Dyerville to Cape Horn Dam.”

Higgins writes periodic reports from a variety of nonprofits and agencies, as well as ERRP’s own observations. He offered his general assessment based on this data in mid-November.

“Despite sparse rainfall so far this fall, several thousand Eel River fall Chinook salmon have disbursed throughout the watershed,” he wrote in a news release. “While some are holding and waiting for rain, others have commenced spawning in main Eel River channels.  The early portion of the run is not robust, but late run Chinook salmon may enter the river, if flows increase.”

The Eel had been one of “the most productive salmon rivers in California historically,” supporting salmon populations of between 500,000 and one million fish each year, Charlie Schneider of California Trout reflected in a recent episode of the EcoNews Report.

“Populations have been really decimated throughout the Eel system, and we’re far below 10% of those historical numbers,” CDFW’s David Kajtaniak said in the episode, titled “How Do We Count The Fish?”. As he explained, CDFW has piloted several DIDSONs, or dual frequency identification sonar, along different forks of the watershed as well as the mainstem. This technology is essentially a camera placed in waterways to track images of fish underwater for later review. Other survey methods include walking along the river to observe fish, stand-up paddleboarding, and snorkeling, because in Schneider’s words, “counting fish is tough.”

The mainstem DIDSON has been in place since 2018 — after this year’s monitoring, researchers hope to gain some clear data on progress toward recovery targets in the Eel over time. For example, the recovery target for the South Fork confluence on the mainstem Eel River (much further downstream than Cape Horn Dam) is around 10,500 Chinook; currently, returns average somewhere between 4,000 and 5,000 fish, Schneider said.

“Restoring the watershed to support these healthy runs of steelhead and salmon is critical for the Round Valley Indian Tribes,” said Wyatt Smith, who represented the tribes in the episode and spoke to the importance of salmon in the Eel both scientifically and culturally. The Round Valley Indian Tribes were just awarded funding to purchase an ARIS, or adaptive resolution imaging sonar, a more recent piece of technology that should be able to provide higher quality imagery and measurement for fish.

By the end of January, more definitive data on this year’s salmon migration numbers will be available. In the meantime, learn more about salmon counting from the experts on the EcoNews Report.