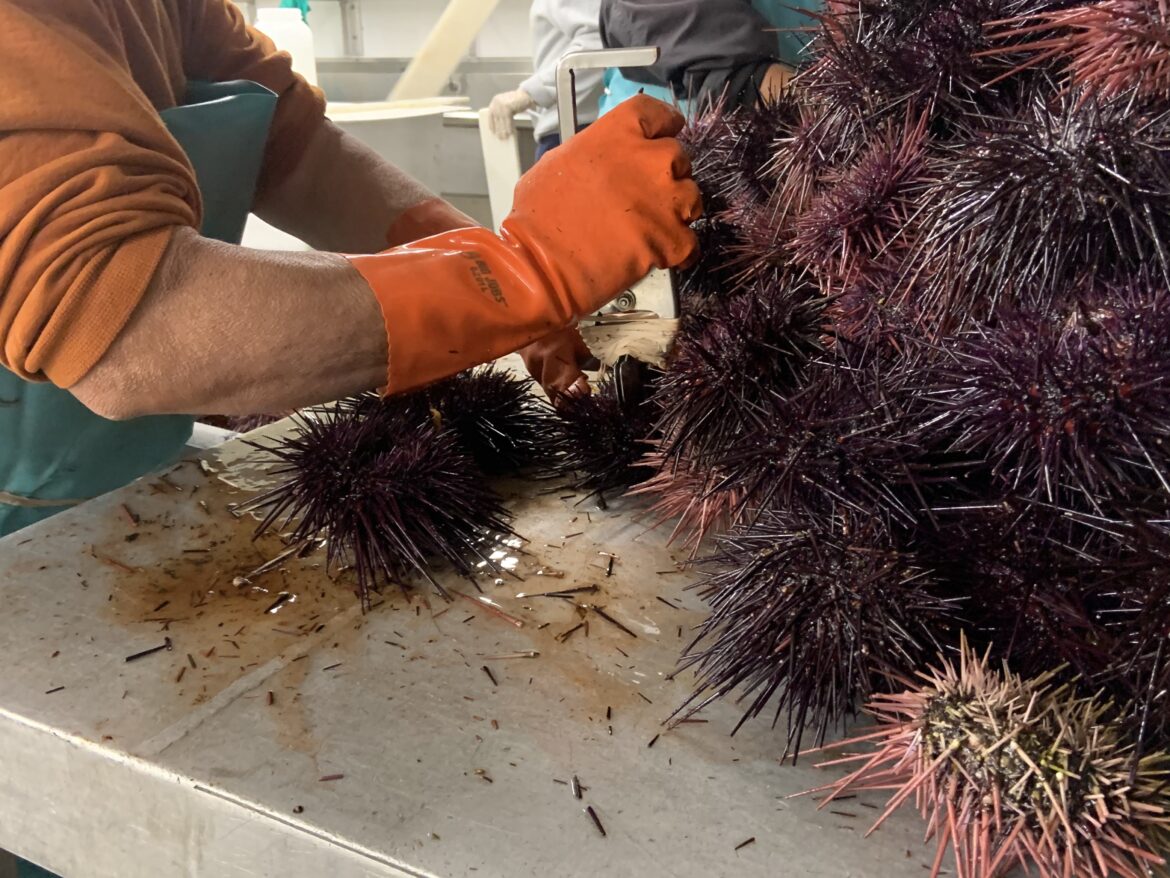 FORT BRAGG, CA, 8/28/22 — Marcos Aban and Ken Gerken spend several days each week diving 80 to 90 feet below the water’s surface off the North Coast, catching as much red urchin as they can. Aban’s career began as a tender on an urchin boat in the late nineties; Gerken started diving in Southern California in the eighties. This fishery was a booming business then. Now, the state is waiting for approval on a second federal fishery disaster declaration to free up funds for struggling processors and fisherman, and Aban’s boat — on which Gerken joins up for dives — is one of the only vessels consistently fishing for red urchin out of Noyo Harbor.

“The last five years have been the hardest years for me since I started,” Aban told The Mendocino Voice on a sunny day outside the Pacific Rim Seafood building in early August. It was around 2 p.m., and he and Gerken had done three dives that day, spending about 25 minutes harvesting urchin each time to collect around 500 pounds total. In the early 2000s, higher numbers of urchin meant easily bringing home 1,000 pounds, for a price of between 50 cents and $1 per pound. But the price “has been changing a lot” based on the amount of uni – the edible gonads of the urchin – and how deep divers go to get it; the return lately can range from between $1.50 and $3 for one pound of urchin, Aban said, but the total amount of urchin caught is always far less than it once was. That week urchin had also been “skinnier,” making for less lucrative hauls.

Diving to sell commercial urchin has always been a specialized business; special training and equipment is necessary. But the overpopulation of purple urchin — for which there’s no commercial market — following strong El Niño years, waters warming from human-caused climate change, and area bull kelp all but dying off in 2014 has meant dramatically fewer returns and forced divers deeper. Kelp is the main food source for urchin, though a hungry urchin will sometimes eat barnacles, Aban explained, leading to worse-tasting uni.

It’s a tough calculation for Aban — and many other divers have left the fishery entirely. Although “going deep” means a livable return on investment in terms of amount of urchin and quality of uni, it also comes with increased hazards such as getting the bends from ascending too quickly without decompressing and exposure to sharks. On New Years’ Day a few years ago, a boat missed the flags fishermen put out to signal a diving area and cut through Gerken’s oxygen hose while he was underwater. Luckily, he had enough backup oxygen to get himself to the surface.

Following approval of a red sea urchin federal fishery disaster declaration for the years of 2016 and 2017, the U.S. Secretary of Commerce granted $3,329,343 in aid to help California’s fishing communities and alleviate harm incurred by the commercial fishery failure. Aid was granted under section 312(a) of the Magnuson-Stevens Fishery Conservation and Management Act (MSA) and section 308(d) of the Interjurisdictional Fisheries Act (IFA); allowable causes for aid under section 312(a) of the MSA are natural, undetermined, or man-made causes, “beyond the control of fishery managers to mitigate through conservation and management measures.”

The letter stated that in 2018 and 2019, the value of the fishery declined by 81% and 88% respectively from the previous five-year average. These types of changes are highly measurable when it comes to fishing, Noyo Harbormaster Anna Neumann told The Voice.

“All of fishing is managed and tracked by fish tickets,” she explained; tickets catalog not just the amount of fish, but the locations where they were caught. “So the government can look and see [when] the fish tickets have actually been reduced for some amount of years. It’s a very, very solid data set, which is super cool and very beneficial to our fleet when collapses do occur.”

Neumann herself used to work processing sea urchin, which she described as “the hardest job I’ve ever done.” She said in his heyday, her former boss had between 18 and 30 employees processing urchin every day; when she worked there, he was down to seven.

Fishermen aren’t the only ones impacted by fishery disaster; when fishery disaster money came through in 2019, relief funds were split between the fleet of fishermen and the processors who prepare and sell uni.

“If I go out and spend my whole day getting to wherever to fish, my expenses don’t change if I catch 100 pounds or I catch 10,000 pounds,” Neumann explained. “So if I’m catching 100 pounds, I still need to equate the revenue of 10,000 pounds. But the processor, on the other hand, is saying, ‘Hey, you brought me 100 pounds. It’s going to be expensive to kickstart my business to process these. I have to get a whole staff in, and ice, and water.’ His startup expenses are just as similar. … It makes everything more expensive and makes it harder to succeed for both of them, because they’re still trying to milk this 100 pounds to make the base capital that they need.”

Tom Trumper owns the processing facility Pacific Rim Seafood in Noyo Harbor. He’s been diving for urchin himself since 1975, and opened Pacific Rim in 1999; the plant is a “family business” processing the urchin catch from himself, his four children, and “a couple of our friends” such as Aban and Gerken. Trumper has also served on-and-off on the Sea Urchin Commission for years. He’s watched the population of divers fluctuate dramatically; he estimates there were 1,000 divers working off California’s coast in the mid-eighties but said following the recent years of warm water, “everybody quit.”

“There’s a healthy population of red sea urchins in California – the problem is with just not enough kelp to feed them all,” he said.

On the few days a week that Pacific Rim processes urchin, around 12 workers arrive at 5 a.m. They crack open the urchin, scoop out the uni, clear away the guts and grime in cold saltwater tubs, let them sit for one hour in an alum solution, and then pat them dry before they’re evaluated on quality and packaged for distribution in 100 gram containers. A short day lasts around six hours; a long day is around 10. Uni with a brighter orange hue go on “A” trays; urchin with more dull color, wetness, spotting marks from their shells, or broken pieces are considered lower quality and sold for less.

Chris Dahl, who worked as a processor for a little while and now manages Trumper’s plant, started trying 10 years ago to get his permit to fish urchin commercially – but the state has restricted the availability of permits following the kelp collapse such that for every 10 retired, just one becomes available.

“I’ve kind of lost hope,” he said. “Maybe it’s a blessing in disguise.”

He also works as a tender on an urchin boat, making sure that oxygen is flowing properly and equipment is operating correctly. He loves uni, and hopes people will keep buying it and trying it.

“It’s an acquired taste, but the first time I went free diving, I was with my dad and he brings up a four or five pound urchin, a big one, and cracked it right there and scooped some gonads out,” he said. “And you know, it’s kind of off-putting at first, but once you try it, they’re pretty tasty.”

Aban’s tender, his son, is off to college this fall – and with the high price of fuel and the difficulty of finding someone to work as a tender for a wage he can afford to pay, he’s questioning the economics of being able to operate a boat and dive consistently.

Solutions to the crisis are coming, albeit slowly. When funds were freed up in the fishery disaster declaration a few years ago, the news came in late October – around eight months after the request was submitted to the U.S. Secretary of Commerce. Furthermore, a project on the North Coast to remove purple urchin and restore kelp showed promising results; longer-term opportunities for urchin divers to remove purple urchin could be possible, and the study provided opportunities for commercial urchin divers in Mendocino County to be paid for helping in kelp restoration efforts. (Aban and Gerken participated, and Trumper’s facility was a collection site for harvested purple urchin).

“There is more kelp this year, so it is promising,” Trumper said. He’s optimistic about the fishery’s future.

For now, Gerken plans to keep fishing for red urchin.

“I’m just a walk-on diver,” he explained. “So I don’t have that expense of owning a boat. It’s a lot easier for me to walk away — but if [Aban] goes, I still like going. When I get tired of it is when I’ll quit.”

To read more about kelp collapse and the urchin fishery, check out our past reporting: