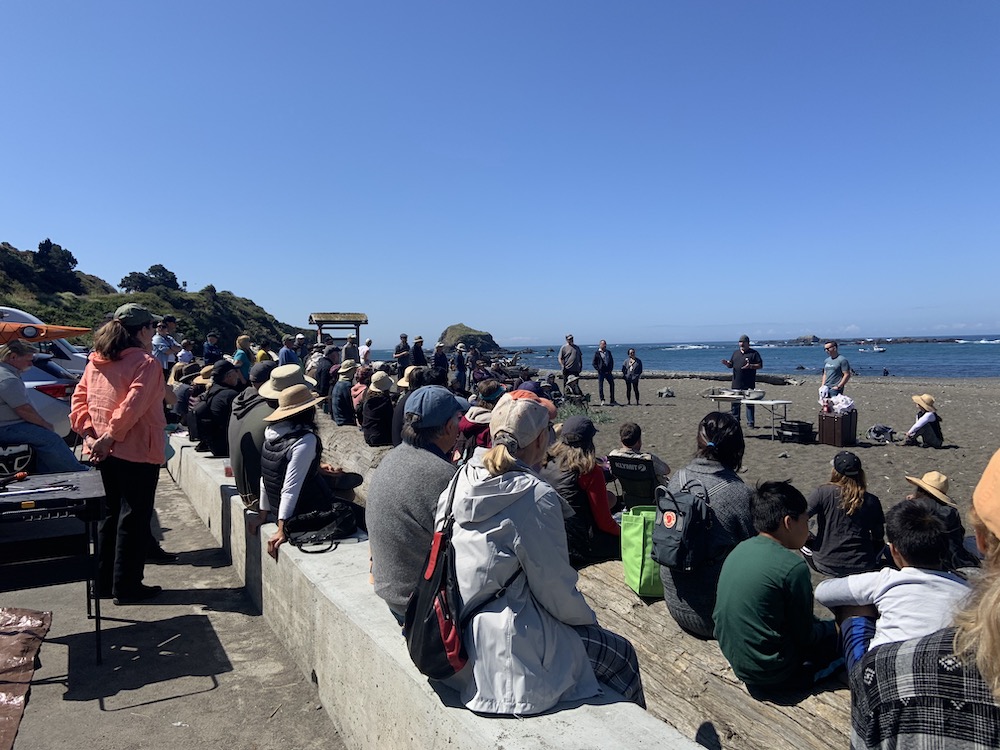 LITTLE RIVER, 6/27/22 – The parking lot at Van Damme State Beach on the morning of Saturday, June 18 was a maze of cars, with more rolling in all the time. An estimated 120 people gathered on the sand, and not just because it was a beautiful summer day. They were there to see a live demonstration of uni harvesting from urchin freshly caught that morning; to learn about overpopulation of purple urchin as kelp and abalone populations suffer along the coast; and to enjoy just one of the events that underpinned the first UniFest, a new annual festival driven by sustainability.

“We developed this idea during COVID, so it was important to us that we created events that we would not have to cancel,” said Cally Dym, a MendoParks board member, the owner of the Little River Inn, and UniFest’s primary organizer.

MendoParks, or the Mendocino Area Parks Association, provides exhibits and educational programming in local parks – as well as facilitating trail improvements and restoration projects. The concept for this weekend, Dym said, began with three events: an uni lunch by Chef Matthew Kammerer at Harbor House Inn, the aforementioned outdoor demonstration at Van Damme by Waterman’s Alliance chair Joshua Russo and Greg Fonts from the Freedive Shop, and a sake seminar at Little River Inn by Kerry Tamura of World Sake Imports.

But interest blossomed to build out even more offerings. Filmmakers Natasha Benjamin and Ana Blanco screened a trailer of their documentary Sequoias of the Sea about kelp deforestation to accompany a talk about marine life by Sheila Semans, executive director of the Noyo Center for Marine Science. Musicians Cheryl Wheeler and Kenny White gave a live performance at Little River Inn’s Abalone Hall. Five different local restaurants highlighted uni on their menus all weekend.

“When we released the reservation[s] they sold out immediately, so it showed the interest that the sea urchin can hold as well as the interest in people traveling to our beautiful part of the world,” said Kammerer, who sourced uni for his offerings this weekend from a restaurant vendor, the urchin removal company Urchinomics which aims to grow uni and supply to restaurants, and in Elk himself that morning. He noted that less-than-ideal ocean conditions and a meager supply of uni to be found within the sea urchins, which tend to be best harvested later in the fall, made that supply a little trickier. Uni, often referred to as the sea urchin’s roe or eggs, are actually sex organs—gonads or ovaries.

Mendocino communities are increasingly drawing on more far-flung interest in the local coastal ecology. Just last month, biologists, politicians, and ocean experts gathered in Fort Bragg for the Blue Economy Symposium and Learning Festival, to discuss the economic potential of the Pacific Ocean for coastal residents.

“In Fort Bragg there are people trying to develop a blue economy, and I’m hoping this festival can support that going forward,” Dym said of UniFest.

When Russo asked on Saturday morning who’d heard about the event in the newspaper or online, around one-third of those in attendance raised their hands. Dym said she didn’t recognize too many locals, suggesting the festival had drawn a sizable out-of-town audience.

“To have 120 people come to what I would call, from a MendoParks perspective, an interpretive program – I don’t know that it’s ever happened,” she said. “It certainly breaks any whale festival programming that we’ve ever done. We were just delighted.”

Stimulating both mind and palate, the urchin festival offered something for everyone. The festival’s ethos also demonstrated that capitalizing on that intersection – between food and ecology – is key.

As Russo shared in his talk, purple urchin numbers have surged here in recent years. Reducing urchin populations along the coast is important because an estimated more than 90 percent of the local bull kelp population, once thriving on the North Coast, died off in 2013 and 2014 as waters warmed from human-caused climate change – then, in the space left by kelp, purple urchin inundated the seafloor in droves. Abalone, which eat kelp, have subsequently seen radically reduced numbers, too.

With the Waterman’s Alliance, Russo organizes recreational divers to gather together and harvest urchin from the seafloor. In some spots along the coast, divers are even allowed to smash urchin underwater – the state of California is trying a few approaches to see what makes an impact. Commercial divers and fishermen, some of whom have seen their livelihoods turned upside down by these dramatic changes to the local ecology, have been collaborating with scientists on these efforts.

“A commercial diver in one day can remove what 100 recreational divers can,” Russo said, laughing.

Many have been working with ReefCheck and the Nature Conservancy regularly to harvest purple urchin and study where kelp grows back. A new report from ReefCheck demonstrates its findings (more on this from The Voice soon!), which include that bull kelp at an urchin removal site at Noyo Bay demonstrated regrowth to 20 percent of the historical density – with little to no kelp growth at the control area nearby. (ReefCheck was training a new crop of volunteer citizen scientists to survey ocean life in the waters off Van Damme Beach during Saturday’s demonstration).

While cutting purple urchin open to reveal the meat inside, Font shared facts about harvesting uni. Larger red urchins garner more culinary acclaim and use, but the purples have uni, too. Many urchins in areas like Van Damme are actually malnourished, Font explained – but even with limited food supply they don’t die off, because they can hibernate for somewhere between 80 and 100 years. This is part of what Urchinomics, the company Kammerer works with, is trying to address with its urchin growth; by feeding purple urchin seaweed pellets on its “ranches” after they’re removed from the ocean, the company hopes to make the purple urchin more viable restaurant fare while also clearing barren seafloor to let kelp regrow.

In his demonstration, Fonts also showed onlookers the white fluid, often emitted while cutting into the uni, called broadcast spawn. It’s a response to water temperature, food conditions, or stress (like the stress of being cut open). He cleaned the urchin out in cold, icy water full of salt, to mimic seawater. He said anyone diving for and harvesting urchin should bring them home in an ice chest and eat them within a couple of days, to keep them as fresh as possible. People agree, across the board, that uni tastes like the ocean.

UniFest seems to have generated some real momentum – Dym says she’s ready to come back and do it again next year, and hopes to expand the educational elements including possibly adding a tide pool exploring event.

“Humans, at least in this country, we really have to start to learn to eat other things than we do,” she said. “We need to learn to eat what’s bountiful and available, and not always just want that same piece of salmon.” More information about participants in this year’s UniFest is available online.