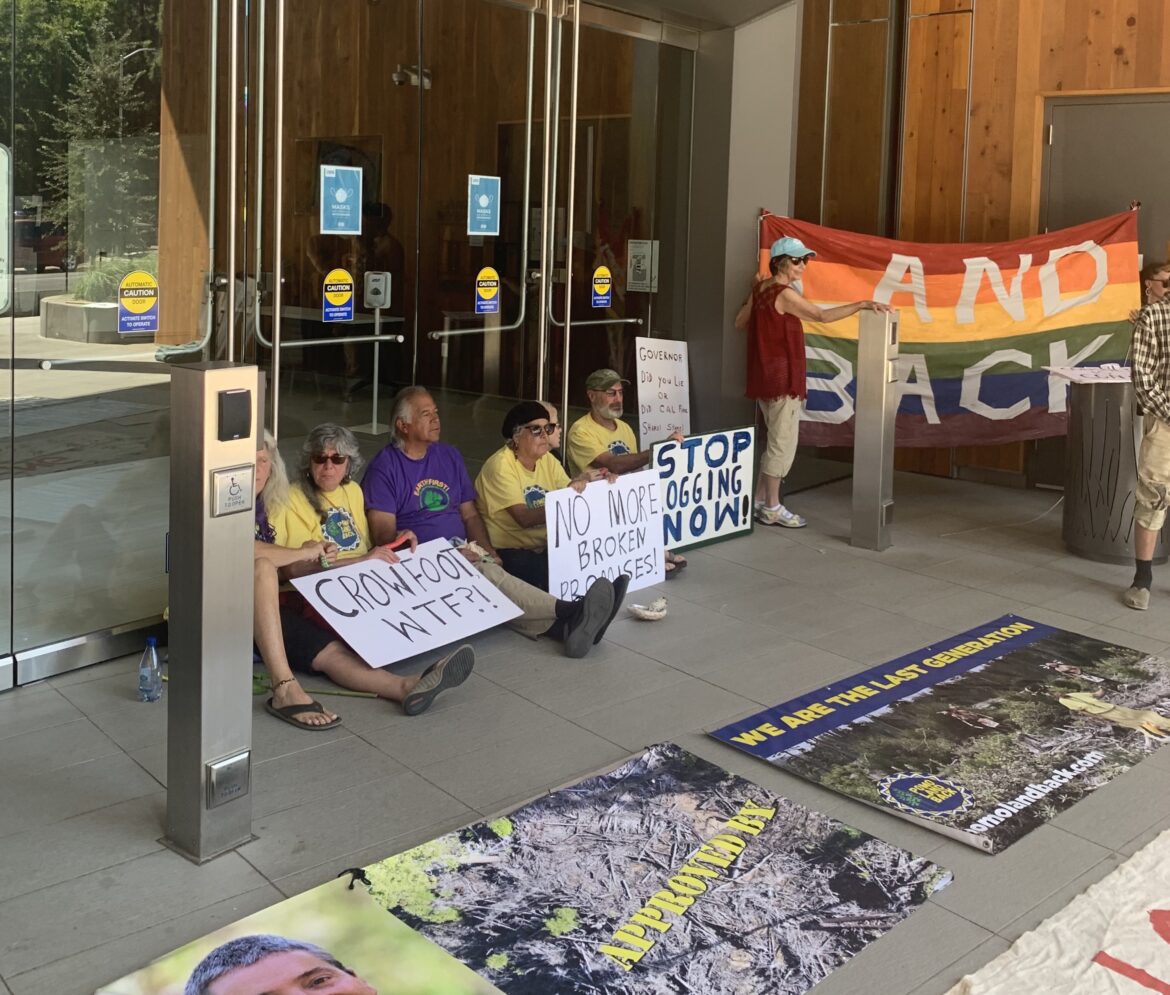 SACRAMENTO, CA, 8/31/22 — A coalition of Mendocino County activists and allies rallied in the state capital on Tuesday, where six were arrested after blocking the doors to the California Natural Resources Agency (CNRA) headquarters.

This was the culmination of a week of actions to “Save Jackson Forest,” which kicked off when Cal Fire announced that it would resume logging on open timber harvest plans (THPs) last week with some modifications to those plans, including a pause on cutting larger trees. The announcement came shortly after CNRA debuted a vision for tribal co-management of Mendocino County’s Jackson Demonstration State Forest, a 48,652-acre redwood forest and the site of Pomo ancestral lands. Michael Hunter, chair of the Coyote Valley Band of Pomo Indians, said last week that the tribe was not consulted or notified ahead of time about the resumption of logging.

Over 50 people rallied in Sacramento on Tuesday afternoon to call for recognition of Pomo tribal sovereignty and for a pause on logging to return. Andy Wellspring, a member of the Coalition to Save Jackson State Forest, told The Mendocino Voice that no one from CNRA emerged to negotiate with activists on Tuesday.

In a phone conversation with The Voice, California Natural Resources Secretary Wade Crowfoot said he was “optimistic” about future management for the forest and “proud of the level of engagement and collaboration” his office has had with Hunter thus far.

“Our interest is in partnerships with all tribes that have the Jackson Forest as ancestral lands, which obviously is numerous tribal governments and communities,” Crowfoot said. “And my understanding is that both in recent weeks and recent days, there has been a lot of interaction with the Coyote Valley tribe about modifications to the timber harvest.”

He also said he feels Cal Fire’s pause on additional THP development while updates to the management plan take place is “really important and meaningful” — but that he feels work should continue on the four THPs that had been paused for about eight months.

“We do have these [existing THPs] that were already approved, went through a public process, were already started, and that local businesses and workers have been counting on,” he said. “We do think it’s appropriate for the already approved, already underway THPs to be completed. And we look forward to really intense work to update the management plan so that future THPs reflect this more modern vision of the forest that takes into account, in a more robust way, ecological restoration and climate science and tribal collaboration.”

But activists understood that a pause would be in place for the duration of negotiations — and have emphasized this point with a refrain of “no more broken promises.” Those protesting in the “Save Jackson Forest” rallies hope for an eventual moratorium on logging in the forest.

“Crowfoot needs to keep his promise,” said Anna Marie Stenberg, one of the Mendocino County residents arrested. “He said logging operations would be paused while he was negotiating with the Coyote Valley Band of Pomo Indians. Why is Cal Fire ending the pause?”

The six people arrested at CNRA headquarters were members of Redwood Nation Earth First! who sat in front of the door and linked arms for around two hours beginning at 1 p.m., Wellspring said. Larry Aguilera, Naomi Wagner, Tom Shaver, Stenberg, Marggie Chandler, and Polly Girvin were charged with misdemeanors — failure to disperse, failure to obey a lawful order, and blocking a public egress — and were let go from the police station after receiving citations, for which they’ll appear in court.

“Being a Native American, I can sympathize with the Pomos, because this is their land,” Aguilera, a member of the Miwok tribe who moved to Willits about five years ago, told The Voice. “Wherever I go, I like to acknowledge whose land I’m standing on. … I realize how important sacred sites are.”

A news release from the Coalition described those arrested as “movement elders”; Girvin, a longtime activist in our area, saw the action as an important model for future generations.

“I went to jail today for my great grandchildren Daniel, Courtney, Chloee and Cambree,” Girvin said. “They are members of the Coyote Valley Band of Pomo Indians and great grandchildren of Priscilla Hunter. I want them to remember that their auntie stood up for their future, so they can be out there in the forest gathering basket materials, gathering medicine, and learning about all the plants. I am a role model for Pomo youth, and that is why I took a stand today.”

At a Jackson Forest Advisory Group meeting earlier this month, State Forests Program Manager Kevin Conway told The Voice that Cal Fire hopes to host the first public comment period regarding the new management plan as soon as this winter. Crowfoot said he hopes the public will be involved in that development process.

“We’re hopeful that this effort to update the management plan really takes into account all of these perspectives,” he said. “We’re very much committed to really better understanding everyone’s perspective and concerns.”

Here’s our coverage on recent happenings around Jackson: