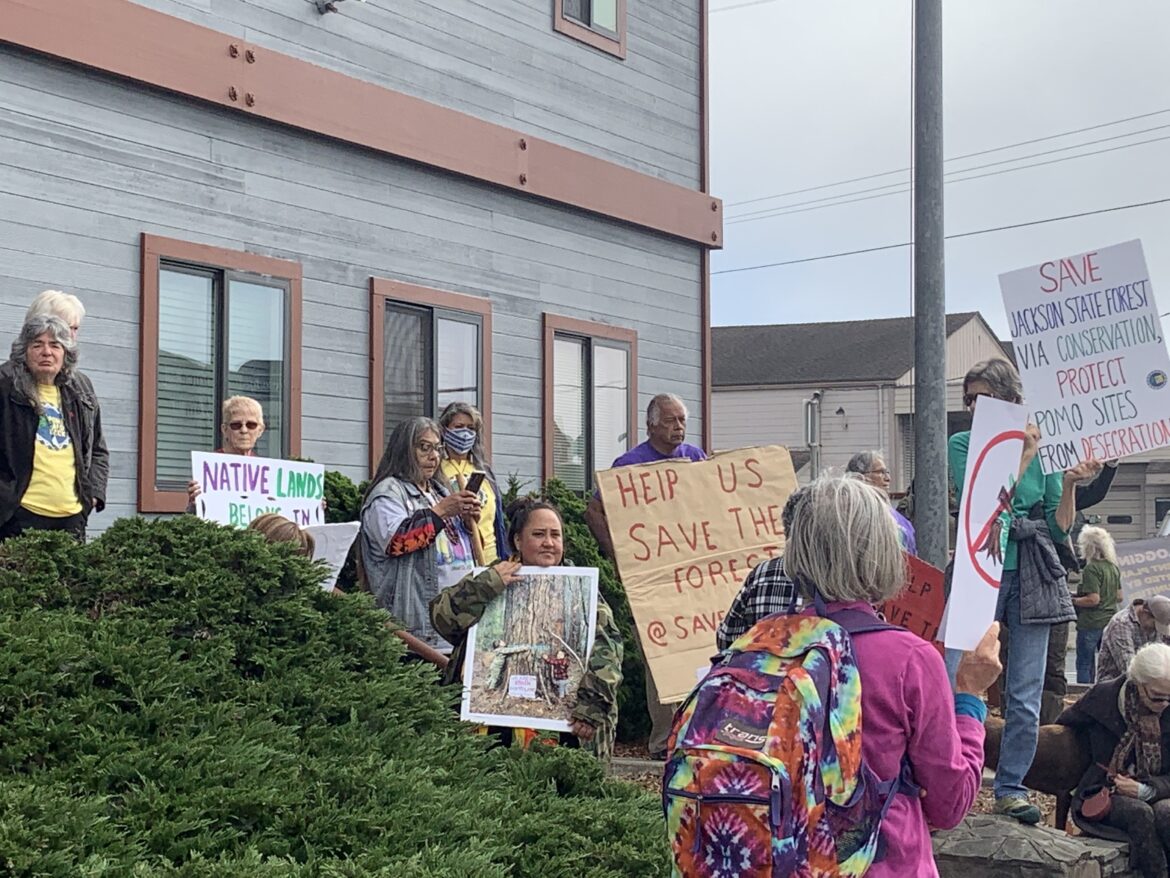 FORT BRAGG, CA, 10/29/22 — Protests against reopened timber harvest plans (THPs) in Jackson Demonstration State Forest (JDSF) continued in Fort Bragg last week when dozens gathered in a march to the local Cal Fire office. The latest flash point was a letter from Cal Fire’s newly appointed tribal point of contact for JDSF, which illuminated the discrepancies between activists’ and the state’s understandings of tribal co-management.

Kirk O’Dwyer, a forester and the tribal point of contact for JDSF, contacted the Coyote Valley Band of Pomo Indians on Sep. 26 proposing co-management of a 75-acre parcel the state agency removed from the Caspar 500 THP along 500 Road.

“When approved this area of the THP included the construction of skid trails, roads, and log landing areas in addition to tree cutting,” O’Dwyer wrote in the letter to Tribal Historic Preservation Officer Priscilla Hunter. He added, “The co-management effort will seek to redefine the objectives and management approaches for this area in a collaborative fashion for this THP.”

Representatives for Cal Fire said the area had been “identified as an important and critical area during government-to-government negotiations with Coyote Valley during the past two years.” Partially for this reason Caspar 500 has remained one of the most contentious THPs. Last Thursday, protesters chanted “Get your chainsaws out of Caspar 500!” and “Hands off Caspar.”

“For Priscilla Hunter … a CalFire proposed vision that does not address ancestral cultural site protection measures is not a vision at all acceptable to the Native community,” the Coalition wrote in a statement following Thursday’s protest. “Her position is that years of logging, road building and skid trail operations straight through ancestral sites must be halted.”

Cal Fire told The Mendocino Voice in an email statement that O’Dwyer’s letter was intended as “an invite and starting point” to encourage “equal and collaborative engagement” in co-management.

“We look forward to learning how best to send invites for conversations in the future,” representatives for Cal Fire wrote.

The agency also clarified that co-management proposals are underway with other tribes, writing that co-management is “often based on different forest projects.” Among these were the first Pomo trail name designated through discussions with the Sherwood Valley Band of Pomo, Ca Sil Xale Dah; stewarding an acorn grove to improve cultural gathering opportunities, with a prescribed burn anticipated this winter; and planned rehabilitation and restoration of a stream through Jackson for future functional and ceremonial use.

Activists said last week that the letter from O’Dwyer did not reflect the “true equal co-management” of JDSF they hoped for.

“You can buy out the Willits Redwood Company,” she said. “You can find the money to buy them out, and our problems will be solved.”

The Voice inquired with Cal Fire about this option, particularly given the $10 million in funds the California Natural Resources Agency allocated in last year’s budget to support forest operations in JDSF to remove revenue-generating pressure on new THPs. Representatives said those were “short-term, one-time funds meant to supplement existing funding to increase research, recreation, and forest health projects while exploring other long-term funding mechanisms.”

“We look forward to learning more about these ideas as part of our management plan process,” Cal Fire representatives wrote. “In this case, a ‘buy-out’ is not a viable option. Buying out of a contract would require the willingness of both parties agreeing to an alternative arrangement not part of original contractual commitments underway. We have not heard of interest in this arrangement.”