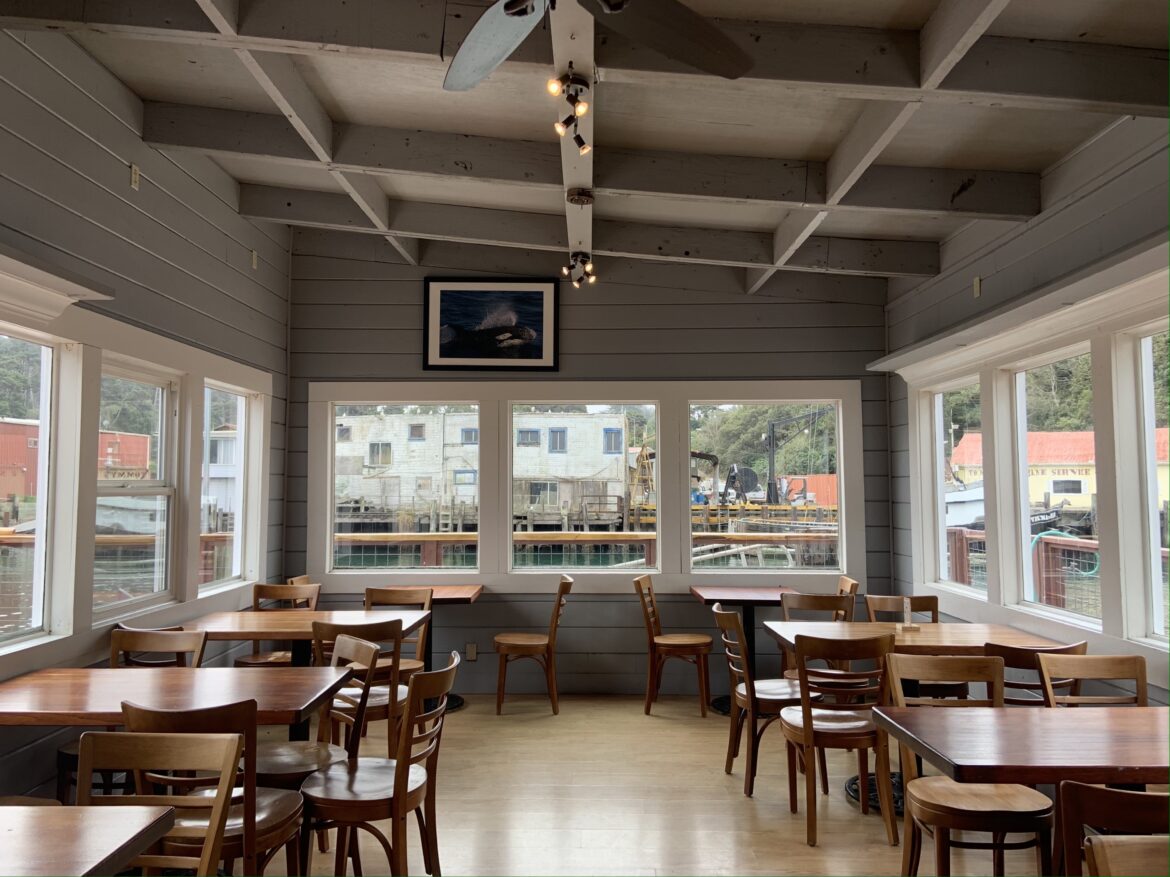 FORT BRAGG, CA, 9/4/22 — On a misty but beautiful morning in Fort Bragg, the long-awaited Slack Tide Café is open for business. Barking sea lions are visible from the deck, somersaulting in the water and chowing down on some fish. The person in line ahead of this reporter exclaimed, “I’m so glad I can bring my own reusable mug!”

This is not your average pit stop for baked goods and coffee. The Noyo Center for Marine Science, a leading marine education organization and a cornerstone of blue economy goals for Fort Bragg, bought the building (and christened it Carine’s Landing) with support from donors back in February. Since then, staff and “an incredible volunteer network” have spent time buffing, scrubbing, painting, and coordinating all the behind-the-scenes needed for opening day last weekend.

The cafe serves up something different from the harbor’s usual seafood fare, offering a wide array of smoothies, tea, and coffee drinks (the latter sourced from Black Oak Coffee Roasters) as well as bagels, muffins, yogurt, salads, homemade sandwiches, and other goodies, many made at local establishments or with local ingredients. One day soon, that menu might include beer and wine. The cafe also gives the Noyo Center an oceanside home for afterschool programs, scientific talks, and events — and eventually, for research based right here.

“It’s a total game changer,” Lynne Sullivan, the Noyo Center’s operations manager, told The Mendocino Voice. “Being a marine science organization, having that access is critical and a really big step for us.”

Dreams for the future are big, too. They always are when it comes to the Noyo Center; since the Center’s inception in 2015, it has grown to a multi-building operation with a discovery center on Main Street, an interpretive center on the Noyo Headlands, and plans for an expansive Ocean Science Center and adjoining laboratory, or “la-bone-atory” overlooking the sea. (The organization has made significant funding strides in pursuit of the laboratory, which will offer a space to study and display the organization’s 73-foot blue whale skeleton).

Michael Hicks, the Center’s development director, credits this to the “dedicated and energetic staff,” especially Executive Director Sheila Semans, whom Sullivan calls “fearless.” The income from the cafe will help support the Center’s operations, but Hicks also feels that realizing the cafe — an unusual undertaking for an organization of this size in a rural area — is a great trial run for executing their Ocean Science Center vision down the line.

“All these pieces might seem like different parts of town, [but] it all helps serve towards building up the skillsets we need to do this on a bigger scale,” he said in an interview with The Voice. “I always say, if somebody wanted to give us a huge check to go build the Ocean Science Center today, that’s great. But do you have the workforce builder? Do you have the experience and expertise to know that’s not something you can just turn on? This is all kind of building momentum toward that, while still doing great work now.”

The Center’s loftiest goals for the Slack Tide Café include applying for change-of-use permits to conduct research in the building, developing an abalone broodstock program to try and bring back the numbers of this vital organism, and establishing a purple urchin aquaculture that can source uni to local restaurants from the North Coast’s exhaustive supply of the overpopulated urchin.

But the cafe can serve up education even before those ambitions come to fruition. Aside from one new employee who brings expertise on cafe nitty-gritty (like operating an espresso machine), all the staff are existing Noyo Center employees with a wealth of marine science knowledge. Sullivan witnessed this firsthand on opening day, when a couple came in curious about the decline of abalone and the sunflower sea star. The barista behind the counter had experience as a research assistant with both those animals, and answered their questions about the local marine life while making coffee.

“Not only did they get a cup of coffee and some pastries, but they also came away with some elevated knowledge about the ocean and what we’re doing as an organization in the community,” Sullivan said. “That really struck me — you can’t get that at Starbucks.”

The Slack Tide Café also prides itself on utilizing reusable materials, including encouraging those who’d like to bring in their own mugs to fill with coffee.

“It’s an opportunity to educate the public on low impact consumerism,” Sullivan said. “A big part of what we’re promoting or talking about with the public is reducing the impacts of plastics in the ocean.” In 2018, the United Nations estimated that about 800 species of marine life were affected by debris in the ocean, the majority of which comes from plastics. Microplastics can also end up in seafood consumed by people.

Beyond the education the organization provides, sitting on the Slack Tide Café’s deck makes for a unique experience of Mendocino County’s coastal environment, with views of both the natural and commercial world of an active harbor. Sea lions feast on fish and seabirds fly overhead, while fishing boats churn toward open water. It’s a complex ecosystem; simply being here brings you closer.

“[Noyo Harbor] has played such a vital role in this community throughout its history,” Hicks said. “I love the energy down here. … We really want to be a part of that. We want to make this continue to be an emerging place where people can come join in the present and what’s offered now, while learning about that history and how it can be intertwined.”

The Slack Tide Cafe is open from 7 a.m. to 2 p.m. Thursday through Monday. Find a menu and more information here.

2 thoughts on “Noyo Center opens Slack Tide Café for coffee, pastries, and learning in the harbor”