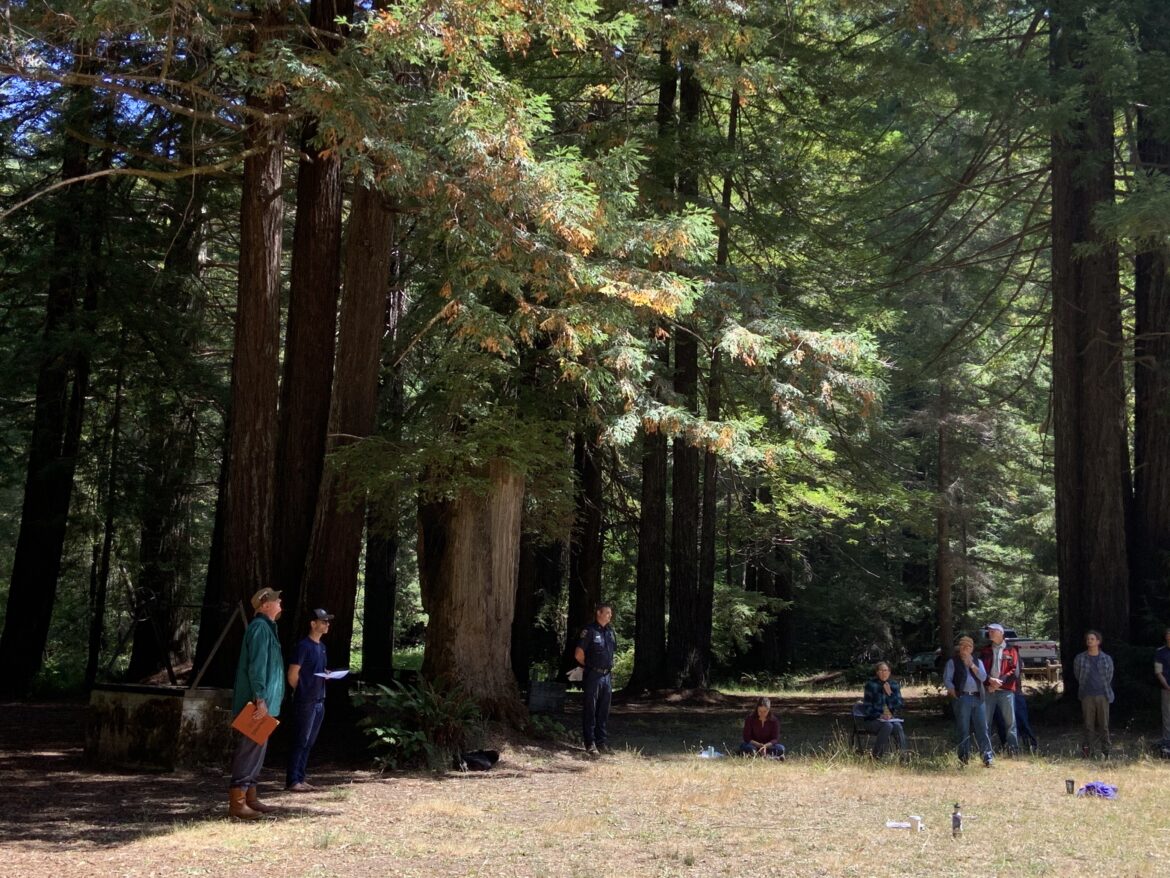 “This is a pre-fire meeting instead of a post-fire meeting, and it’s a much better meeting to have,” said Kyle Farmer, who spoke about the benefits of prescribed fire on behalf of the Mendocino County Prescribed Burn Association.

Cal Fire and JDSF have released a tentative map of planned and proposed fuel breaks in JDSF, but hope that nearby landowners and homeowners can help them extend these breaks along private lands, as following a ridge line is more effective than skirting forest borders. Different types of fuel breaks are possible, although Cal Fire mentioned a desire for shaded fuel breaks that would provide shade cover from larger trees’ canopies. Sale of “mature trees,” from JDSF is possible where it applies, State Forests Program Manager Kevin Conway said at the meeting.

Residents were given the opportunity to mark up areas of concern — including at Mitchell Creek, where a fuel break is being proposed. Cal Fire leadership reiterated that they hope to hear from residents about which types of fuel breaks might work best in their communities. Future community meetings are planned for late January or early February, and more information on fuel break infrastructure in JDSF — including flagged and marked areas of the forest — will be provided at a Jackson Advisory Group (JAG) meeting in February. (Further details on time and dates will be shared when meetings are finalized).

Creating a fuel break — a “strip of land on which vegetation has been modified so that a fire burning into it can be more readily controlled,” an area typically between 200 and 400 feet wide — by clearing smaller trees and plants down to soil is often the first order of business when firefighters arrive on scene to fight a wildland fire, Mendocino Unit Deputy Chief Brandon Gunn explained. Fire is less likely to catch on easily flammable plant life, and crews can make a stand.

By creating these breaks ahead of time, Cal Fire hopes to establish zones that firefighters could use to protect communities (like Caspar and Fort Bragg) that border JDSF. Creating the breaks would also acquaint firefighters with those communities’ layouts and hazards for ease of aid should a fire occur. Although Mendocino County’s coastal towns have not been affected by the extreme wildfires that have imperiled our inland communities, enormous wildfires such as the CZU Lightning Complex fire in Santa Cruz illustrate the vulnerabilities of coastal communities that haven’t seen much fire in recent decades.

Instituting a Wildfire and Forest Resilience Project in the 2022-2023 state budget was a high priority of Governor Gavin Newsom, an effort that includes millions in funding to “implement high-priority fuel reduction projects to protect communities from wildfire.” But the efficacy of fuel breaks as a fire management tool has been called into question.

A 2011 paper on fuel break effectiveness by Alexandra Syphard and colleagues summarized fire data in the Los Padres National Forest over a 28-year-period: “Fires stopped at fuel breaks 46% of the time, almost invariably owing to fire suppression activities. Firefighter access to treatments, smaller fires and longer fuel breaks were significant direct influences, and younger vegetation and fuel break maintenance indirectly improved the outcome by facilitating firefighter access.” Extreme weather conditions such as high winds can cause wildfires to leap across fuel breaks, scientists found, and many fires do not intersect with existing fuel breaks. Rapid growth of brush after fuel clearing is also probable; Cal Fire officials mentioned a “maintenance phase” being a priority in fuel breaks.

This makes home-hardening and defensible space all the more important in protecting communities. As Fire Safe Council Executive Director Scott Cratty explained, “We go way beyond what you’re going to see in other evaluations.” He encouraged residents to seek information on home-hardening from the council’s website, and to consider establishing their own neighborhood council to identify fire hazards and offer fire prevention tools.