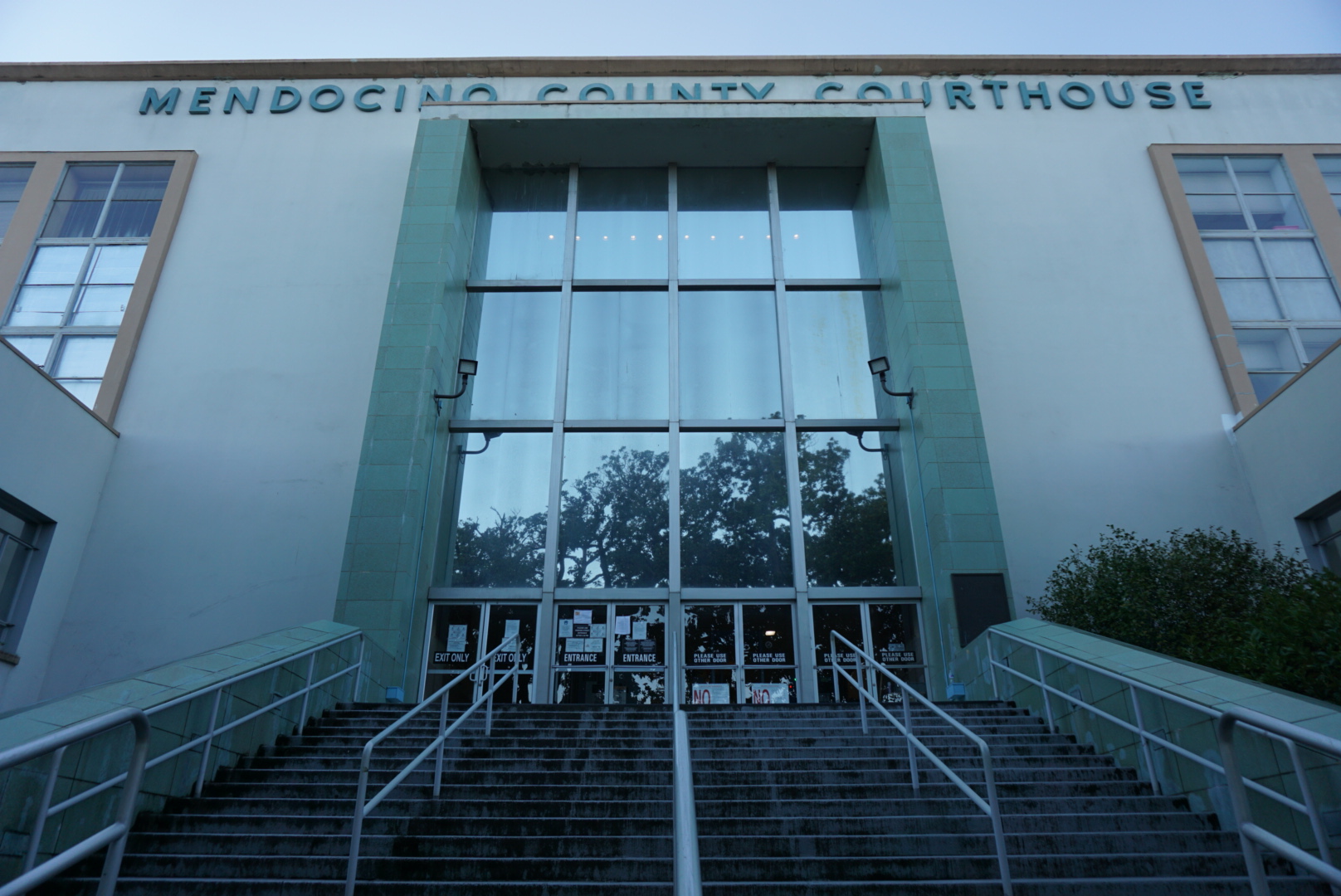 UKIAH, 12/8/21 — Gina Rae Bean, who was found guilty on Oct. 5, 2021, of leaving the scene of a collision that killed Calum Hunnicutt more than two years ago, was sentenced to 210 days in county jail this afternoon at the conclusion of a lengthy and emotional hearing before Judge Anne Moorman in the Mendocino County Superior Court. She’s been ordered to surrender Jan. 18, 2022, to begin her sentence.

Hunnicutt died July 18, 2019, at Mendocino’s only stoplight — the intersection of State Route 1 and Little Lake Road. Bean was driving north in a Toyota Tundra around 10:45 p.m. when Hunnicutt struck the side of her vehicle on a skateboard. Court records stipulate that Bean had a green light, that Hunnicutt rolled into the intersection against a red light, and that he was at fault for the crash that resulted in his death. But Bean fled the scene, claiming later that she thought she’d struck a deer, and remained at large for more than a week as word spread throughout the Mendocino Coast about Hunnicutt’s death. His friends and family formed a Facebook group called Justice for Calum which has grown to roughly 1,275 members as of this article’s publication.

A warrant was issued for Bean’s arrest after a lengthy investigation. She turned herself in Dec. 2, 2019, according to the California Highway Patrol, and was arrested on suspicion of vehicular manslaughter — but subsequently charged with and found guilty of the lesser felony of leaving the scene of an accident. Prosecutors alleged that Bean also induced her former boyfriend, co-defendant Ricky Santos, to help cover up the crime by repairing her vehicle. He was charged as an accessory, but found not guilty this October.

Deputy District Attorney Eloise Kelsey argued today for the maximum term of four years in state prison, stating that Bean should not be granted the leniency of probation due to an “ongoing character trait of dishonesty” — adding that Bean “outright attempted to deceive the court” about evidence being “wiped off” the vehicle she was driving at the time of the crime. Kelsey also invited Janet Powers Wolfe, Hunnicutt’s grandmother, to read a victim impact statement to the court:

“The death of my first born grandson has been one of the hardest losses of my life,” Wolfe said, adding that Hunnicutt’s remains were too mangled for a viewing and the emotional trauma was compounded by delays in the autopsy and investigation. “This was a tragic accident that when Gina drove away, turned into a crime.”

Hunnicutt’s cousin, Phoebe Wagner, also attempted to read a statement from witness Heather Hug — but defense attorney Mark Kalina objected on the grounds that Hug was a witness rather than a family member. Moorman ruled that only family members would be permitted to address the court directly, and entered Hug’s written statement into the record. Moorman said later that more than 30 written statements are on file for this case, including many described as character references in support of the defendant.

“This case has, to some extent, ripped the coastal community apart,” Kalina said. “We all want justice. We are confident the court will administer justice.” Kalina called the prosecution’s argument “in line with this country’s tendency to over-incarcerate.” A four year sentence would be unreasonable and inappropriate, according to Kalina, and he intends to file a motion seeking to have his client’s felony conviction reduced to a misdemeanor. “I think probation would be the appropriate sentence.”

“Social media has amplified the situation and made quite a problem,” Kalina said, leading to hostilities on the coast. He alleged that Bean has received multiple death threats, some involving specific criminal acts, and that she has repeatedly been harassed and confronted at work and elsewhere around Fort Bragg. “Grief is a difficult thing,” Kalina said. “Social media has turned that grief into anger and threats of violence.”

“I would much rather they heap it on me than take it out on members of the community, because when all is said and done we still have to live together,” Moorman said, cautioning the community against further hostilities and urging them to let today’s proceedings serve as closure. She explained that Bean’s offense was deemed nonviolent under state law, and if sentenced to prison time in the California Department of Corrections and Rehabilitation, the state would likely send Bean back to serve out her term in the Mendocino County Jail under the Public Safety Realignment Act of 2011. She also called state prison a “nasty place.”

“It’s particularly nasty for women. It is not a place where rehabilitation takes place,” Moorman said. “I’ll let you all know, I’m not sending Ms. Bean to prison today.”

Moorman sentenced Bean to 210 days in county jail. She will be eligible  for probation upon her release. Her sentence also includes 200 hours of community service and restitution payments, the specific amount of which has yet to be determined. Bean has been ordered to surrender Jan. 18, 2022, after the holidays, so the single mother of three can remain home with her children through the end of December.

Calum’s father, who asked that his name be omitted from this article, stormed out of the courtroom shortly before it went into recess. He was later found among family outside shouting, “A travesty has occurred!” up the courthouse steps in the direction of the front door.

11/28/19 — Warrants issued and one arrest made in fatal hit and run of Calum Hunnicutt, authorities continue search for suspected driver

8/30/19 — Friends and family of hit-and-run victim demand “justice for Calum,” at Ukiah rally

6 thoughts on “Gina Bean gets 210 days in death of Calum Hunnicutt but will remain out of custody until January (UPDATED: 9:25 p.m.)”