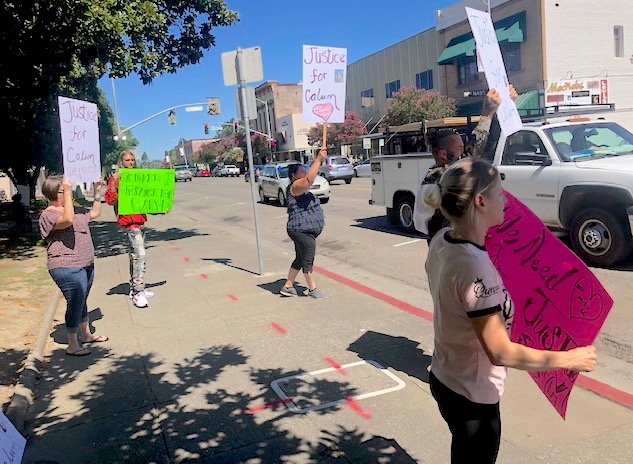 Calum Hunnicutt's friends and family hold a Justice for Calum rally outside the courthouse in Ukiah on August 29, 2019.

MENDOCINO Co., 8/29/19 — “I decided to do this today because I want the CHP and the courthouse to know we’re not going to forget about this,” said Maria Pulido, as she stood outside the Mendocino County Superior Courthouse on State Street holding a sign calling for “Justice for Calum.” Pulido is the aunt of Calum Hunnicutt, the 21 year old Mendocino man who was killed in a fatal hit and run accident on July 17 in Mendocino.

Friends and family of Calum Hunnicutt held a small rally outside the courthouse mid-day today to bring attention to the absence of an arrest related to Hunnicutt’s death. The young man was skateboarding on State Route 1 at the intersection with Little Lake Road when he was struck by a car and killed; the California Highway Patrol (CHP) has confirmed that a car was impounded during the investigation, but has not provided further updates to the public or the family beyond a press release on July 18 and a Facebook post on August 1.

The CHP made some further statements today in an interview, saying that the investigation is being handled by that agency, and is being conducted in a thorough fashion, which is often time consuming.

Officer Kiuya Brown, of the CHP Ukiah office, confirmed today that the investigation is still ongoing, and that the agency, “Wants to make sure that everything is done correctly before the report is submitted to family and friends.” He added that fatal collision investigations can take longer due to thorough examinations at the scene, as well requiring several levels of review before they are published for public viewing.

Today, Hunnicutt’s mother, uncle, aunts, and cousins, along with other friends and family, held signs, and called for “Justice for Calum,” as passerbys honked their horns in support or called out the occasional question about what had happened. Between ten and fifteen people were present at different times outside the courthouse, and the plan was to move from the courthouse to the Ukiah CHP offices, on South Orchard Street, around 2 p.m. The group said they would continue to rally every Friday until they felt justice had been served for the young man’s death.

Maria Pulido and Hunnicutt’s mother, Crystal Pulido, both noted that the family hadn’t received any new information from investigators since the initial report of his death: “That’s why we’re here,” Maria said, “we haven’t been notified of anything.” She added that she had written a letter to Assemblyman Jim Wood, who represents most of the North Coast, and his office said they would look into it; Hunnicutt’s mother said she had hired a private investigator and an attorney.

“My baby was a really good kid, he was only 21. We want [the driver] caught and put in jail, and to give them the chair” said Crystal Hunnicutt. She added, “The town of Mendocino is really upset too — why hasn’t anything been done by now?”

Hunnicutt’s death has sparked outrage in the community, and a Facebook group, “Justice for Calum,” has over 1,000 members, many of whom have written letters calling for progress in the investigation. A beachside celebration of life was held for Hunnicutt on August 17. An initial press release was issued by the California Highway Patrol regarding the collision, but a statement about the investigation was issued by the agency on Facebook on August 1, which can be read in full below.

Officer Brown explained that the investigation was primarily being conducted by officers based in Fort Bragg, and he was unaware of whether any arrests had been made, or if additional suspects or evidence have been linked to the investigation. Brown noted that the investigation was being entirely conducted by CHP within Mendocino County and did not involve other offices or agencies, and that typically CHP would make their own arrests. However, the Mendocino County Sheriff’s Office, which is also the county’s coroner, is conducting the autopsy. He added that fatalities are, “Really hard for people in a small community,” but emphasized the agency would be unable to share additional details until the investigative report was complete.

“They’re not going to release information until it’s done, but that doesn’t mean it’s not being done,” Brown said. “We want them to take the time to do it right, and we can’t respond to every rumor on social media…but just because you don’t hear anything, we don’t want people to jump to conclusions.” Noting that he believed the investigation was not taking longer than is typical, Brown said, “We don’t want to push them to go faster, we want to make sure they are working thoroughly and correctly.” Brown said the agency had gotten a lot of calls regarding Hunnicutt’s death, and called it a “terrible, tragic, event,” saying, “We want to get people the answers they want.”

Hunnicutt’s cousin, Trino Pulido, also held a large sign, and echoed the frustration that no one had been charged in the case. He encouraged anyone who would like to support the family to join them on upcoming Fridays outside the courthouse.

Here’s a video of Maria Pulido, Calum’s aunt, talking outside the courthouse, with the CHP Facebook post included beneath:

On 07/18/2019, the Fort Bragg CHP was called to investigate a hit & run collision on SR-1 at Little Lake Road that tragically resulted in the death of Calum Hunnicutt. Our investigation has been ongoing since the crash happened and the diligent investigation work by our officers has led to a person and vehicle of interest. The vehicle was impounded for evidence on 07/19/2019. Due to the fact that the individual name has not been released at this time, we are unable to release any information regarding their identity ( per government code 6254(f)). If an arrest occurs we will provide additional information at that time.
We would like to thank the Coast community for their continued support of us during our investigation. We are very grateful for the tips and information that has been provided to help us piece together this investigation. We would also like to express our sincerest condolences to the Hunnicutt family during this incredibly difficult time in their life. We will continue to work diligently in our quest to bring the person/people responsible for Calum’s death to justice
Anyone with known information pertaining to this incident are asked to call the California Highway Patrol Ukiah are office at (707) 467-4420.

One thought on “Friends and family of hit-and-run victim demand “justice for Calum,” at Ukiah rally”