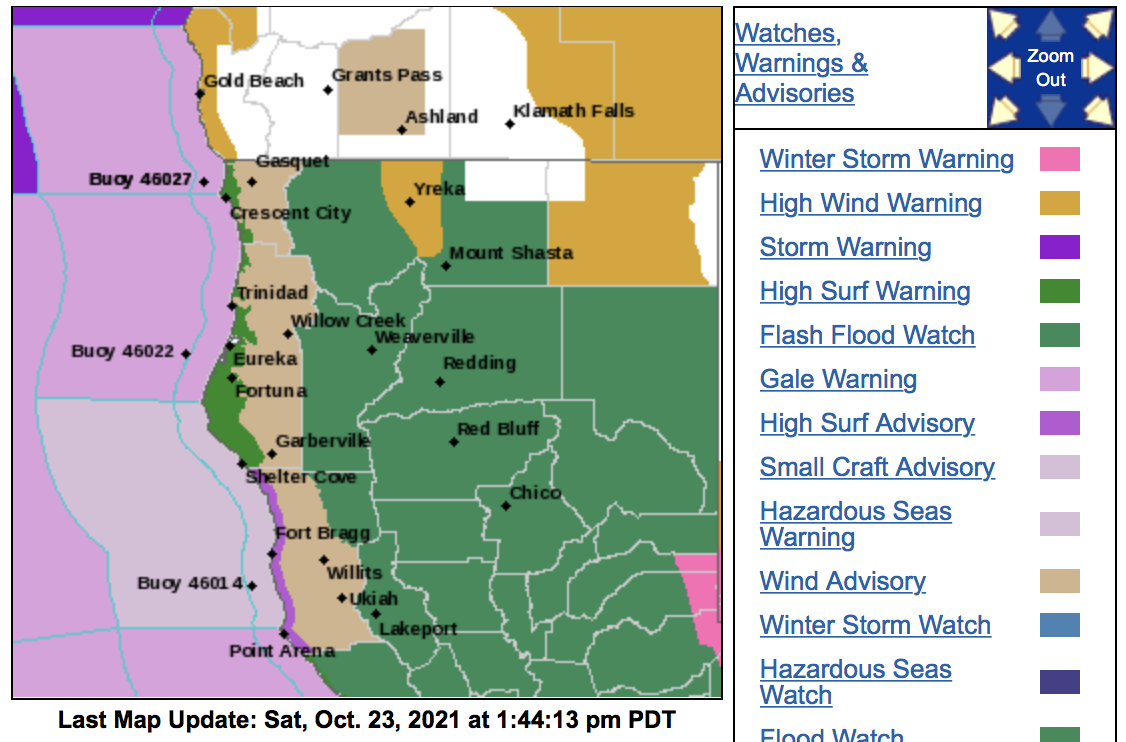 Editor’s note 10/24/21 — Our most current updates on this weather event can be found here.

MENDOCINO Co., 10/23/21 — A “hurricane grade” atmospheric river is expected to bring a series of storms and significant rainfall to Northern California beginning this evening, with the National Weather Service (NWS) and other agencies warning residents to prepare for heavy precipitation, rapidly rising rivers, high tides, and potential flash flooding in burn scar areas through Monday. The Mendocino County Sheriff’s Office (MCSO) is warning residents in flood-prone areas to prepare for heavy rains, with sandbags if necessary, and to clean up properties, including culverts, of possible debris that could create problems in high winds, flooding, or rising rivers.

The majority of the precipitation, which could be between 4 – 8 inches locally, is expected to begin overnight on Saturday, with the heaviest rain arriving early Sunday and continuing through Monday. The impacts of the storm series are forecasted to vary depending on specific microclimates, with NWS advisories for hazardous weather, high winds, high surf, flash flooding, and hazardous seas in place for different portions of Mendocino County and the North Coast. Driving conditions are expected to be difficult especially due to high winds, debris, and potential slides, and power outages are possible.

The highest risk of flash flooding in recent burn scars, which in Mendocino County includes the Hopkins Fire burn scar in Calpella, along with possible flooding in the August Complex burn scar areas. Emergency mitigation measures were put in place this Thursday in portions of the Hopkins Fire area in an attempt to reduce debris flow and runoff into the Russian River.

Due to the volume of precipitation, which could alleviate some of the drought-related water shortage, NWS has warned that rivers may rapidly rise between one and five feet, so residents are warned to watch for potential debris and rapidly rising waters, and small rivers and creeks may overflow. On the coast, high tides and large swells are expected, and a high surf advisory has been issued. In mountainous areas in parts of interior Northern California could see snow that will impact roadways.

Significant rainfall returned to the North Coast on October 17, and since then a slew of weather-related changes have been put in place to prepare the roadways and region for wet weather. Cal Fire Mendocino has lifted the burn permit suspension for the season, beginning October 25, and residents with residential and agricultural burn permits will be able to resume burning on permissible burn days, established by the Mendocino County Air Quality Management District at mendoair.org. The U.S. Forest Service has also implemented temporary trail closures due to heavy rains, which may continue through June, 2022 (read more about these changes here).

Since the “rain year” began on October 1, above average rainfall has occurred, which may have effectively ended the wildfire season for our region for 2021, according to analysis by meteorologist Daniel Swain in his latest Weather West post. In the Mendocino National Forest, preparation has begun for prescribed burns in a number of areas, and such projects have already resumed in Humboldt County and other parts of the North Coast.

Here’s some important resources to check for the most current information, as well as our general emergency resource guide. We will continue to update you as conditions change, and the most specific information from official agencies for your location can be found on these sites: