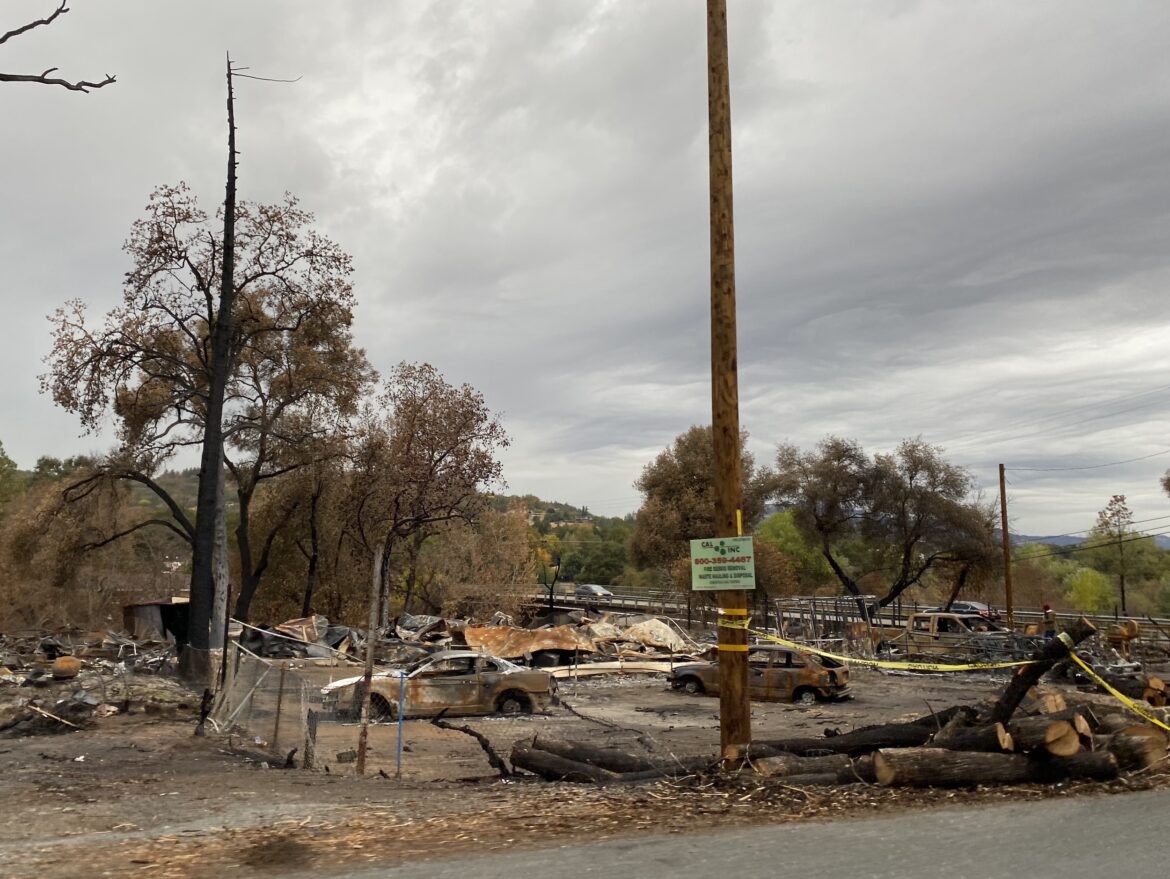 UPDATE: 10/20/21 — Travis Killmer with Mendocino County’s Prevention, Recovery, Resilience and Mitigation Team, returned to the Board of Supervisors at the end of their meeting Tuesday with a last-minute plan to mitigate the environmental threat posed by storm runoff into the Russian River at the scene of the Hopkins Fire, which burned dozens of structures last month and has not yet been cleaned up.

The county intends to contract with the California Conservation Corps to provide a 14-person crew for two days while they install 1,300 linear feet of straw wattles and 965 feet of silt socks, with 500 2-foot stakes to hold it all in place at an overall cost of just under $50,000 including labor. These erosion control measures should limit the extent to which toxic debris from the burn scar runs off into the river once they’re installed on Thursday and Friday. According to weather forecasts, however, that means the CCC will be performing this work on a last-minute basis during a rainstorm expected to bring several inches of precipitation to the Ukiah Valley.

MENDOCINO, Co., 10/19/21 — Forecasters at the National Weather Service (NWS) office in Eureka are expecting back to back rainstorms on the North Coast this week, beginning with one this afternoon and another coming Thursday evening and lasting into Friday morning. The second storm is expected to be the heaviest, but over the next seven days they’re anticipating as much as four to six inches of precipitation — and that could be a problem.

“Although this is excellent news for our county as a  whole, and should help lessen the impacts of our ongoing drought and hopefully diminish our threat of wildfire for the year, it is very bad news for the Hopkins burn scar,” Travis Killmer, with the county’s Prevention Recovery Resilience and Mitigation Team, told the Mendocino County Board of Supervisors this morning.

The fire has only been extinguished for a month, and cleanup hasn’t begun yet. With the storm coming in, Killmer has been working on a request for state assistance installing straw wattles and potentially other mitigation measures, but if help is coming it likely will not get here before the rain. Killmer told the board he’s been looking into the county’s options to take action without support from Sacramento, and will return with a plan and a cost estimate as soon as possible. This issue did not appear on today’s meeting agenda, so Killmer addressed the board during public comment and the board passed a resolution adding an emergency item to the agenda, which should allow them to take action without violating the Brown Act.

“This is an all hands on deck emergency,” First District Supervisor Glenn McGourty said. “I volunteer to work with Travis. I’ve done this kind of stuff before, so let’s see what we can do.”

Further action is expected on this matter later today. You can follow the meeting live on the county’s YouTube channel and the agenda has been published on the county’s website.

Tonight’s storm is expected to bring between a half-inch and one inch of rain to the Ukiah area, with similar forecasts in Fort Bragg and Covelo. Willits, Laytonville and Gualala are expecting between 1 inch and 1.5 inches by the end of Wednesday. Elsewhere on the North Coast, some areas outside Mendocino County are expecting snow.