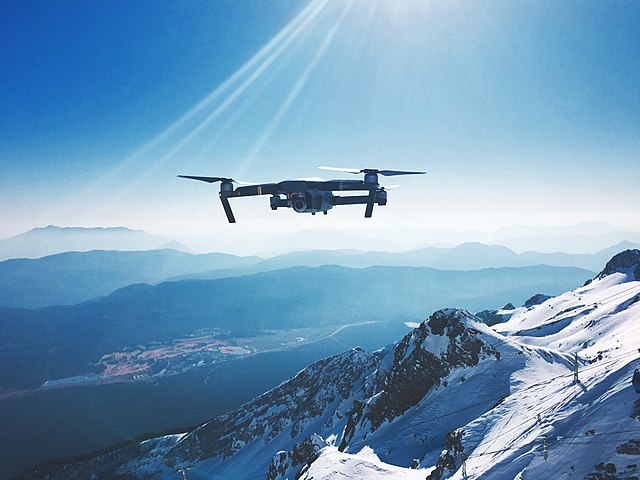 This file is made available under the Creative Mavic pro on YuLong mountain, by Sorry imKirk, Commons CC0 1.0 Universal Public Domain Dedication

MENDOCINO Co., 10/21/21 — Agencies within the Mendocino County government are operating at least six unmanned aerial vehicles (UAVs) or surveillance drones, according to county documents and a report found in the Atlas of Surveillance, a project of the Electronic Frontier Foundation (EFF) aiming to “document police tech in our communities with open source research.”

They cite the third edition of a report called Public Safety Drones from the Center for the Study of the Drone at Bard College, which is not specifically about Mendocino County and does not mention us at any point, but does include some other interesting details: At least 1,578 government agencies in the United States have acquired drones, about 70% of those agencies work in law enforcement, and the majority of drones used in that capacity are consumer-grade models manufactured by China-based DJI Technology Co.

The Mendocino County Sheriff’s Office (MCSO) operates five DJI drones, each a different model, according to a spreadsheet furnished by Capt. Greg Van Patten in response to a request for comment. There are five different models, including an M1P Mavic Pro, an M1X Mavic Pro Platinum, a Matrice 210 V2, a Mavic Mini and a Mavic 2 Enterprise Dual. The specific capabilities on each model have been redacted.

“The UAV program has been a significant benefit to our Search & Rescue missions and has enhanced officer safety when used in connection with field activities not prohibited by the UAV program policy,” Van Patten said in an email Thursday. “We have had several situations where the use of an UAV has saved the lives of our deputies during potentially deadly tstand-off situations with armed persons.”

Van Patten also provided a copy of that policy, which is three pages long and available here. The policy prohibits using drones and enhanced optics like thermal imaging to record private citizens in private areas like their homes or yards, or anywhere they have a reasonable expectation of privacy in the legal sense, without a warrant or “exigent circumstances” — defined by Cornell Law School as “circumstances that would cause a reasonable person to believe that entry (or other relevant prompt action) was necessary to prevent physical harm to the officers or other persons, the destruction of relevant evidence, the escape of the suspect, or some other consequence improperly frustrating legitimate law enforcement efforts.”

Section 136.6 of the policy, which defines prohibited uses of the sheriff’s drones, states that unmanned aerial surveillance equipment shall not be used by deputies for random surveillance activities; to target any individual based on race, ethnicity, nationality, religion, disability, gender or sexual orientation; to harass, intimidate or discriminate; or for deputies conduct personal business of any type. The section also states that drones shall not be weaponized.

MCSO and the Mendocino County District Attorney’s Office are among at least 140 California agencies to procure drones so far, according to Public Safety Drones. The DA’s office is flying a DJI Phantom 210, according to the dataset provided by the EFF, which cites the MCSO’s Search and Rescue website as well as an article in the Ukiah Daily Journal as their sources of information, but we have provided some additional resources. It should be noted that the UDJ article appears to have been written by DA spokesman Mike Geniella. We’ve filed a request for additional information under the California Public Records Act, seeking to pin down exactly how many drones are in use by the DA or any other county department, and this story will be updated if we find anything interesting.