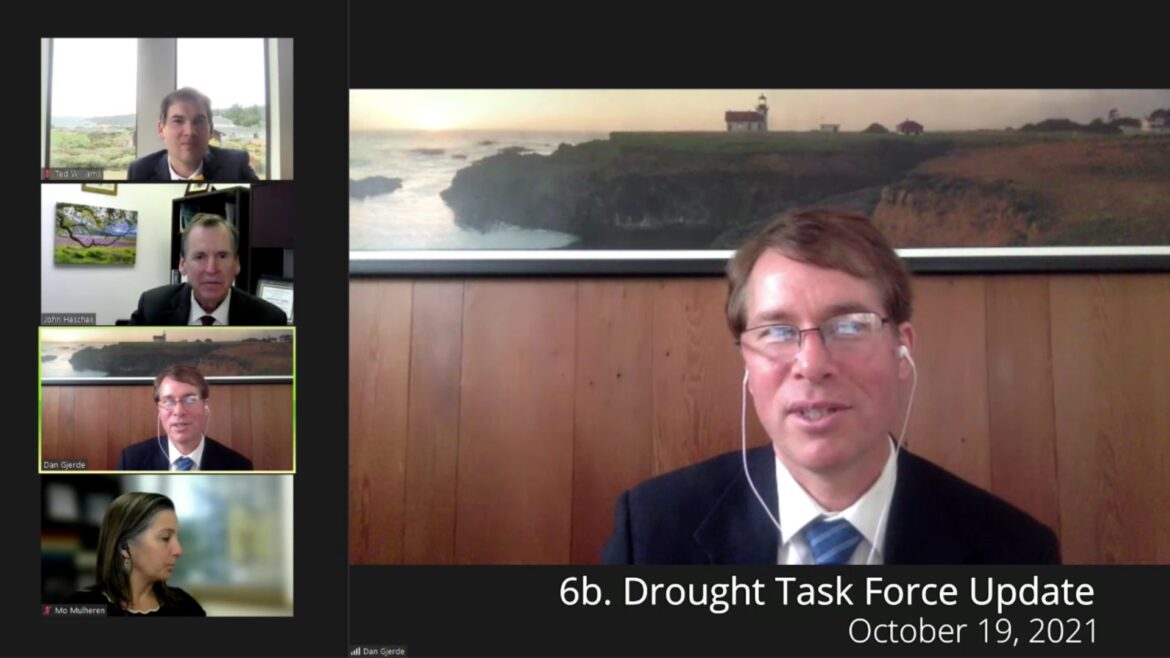 The Mendocino County Board of Supervisors discuss earmarking $25,000 to hire an environmental consulting firm to manage its water grant proposals at its regular meeting on Tuesday, Oct. 19.

MENDOCINO Co., 10/20/21 — Mendocino County’s water infrastructure is going to need an upgrade in order to be more resilient in the face of changing patterns of precipitation. The county supervisors are taking steps to modernize that infrastructure, starting with securing funding.

On Tuesday, the Mendocino County Board of Supervisors directed staff to negotiate a contract of up to $25,000 with environmental consulting firm Larry Walker Associates, which put together the county’s groundwater sustainability plan. The firm will be expected to organize grant proposals for the different municipalities and water districts in Mendocino County.

That’s invaluable for small districts like the Mendocino City Community Services District (MCCSD). Grants are more likely to go to projects that are “shovel-ready,” meaning a lot of the front-end planning has already been done, “but it takes a lot of money and planning to get a project shovel ready,” the district’s superintendent Ryan Rhoades told The Mendocino Voice. Rhoades is one of two people that make up the staff of the district, so some days he’s out in the field doing sewer maintenance or, during the drought, delivering bottled water. But that takes time away from being able to work on the kinds of grants the district needs to address long-term water issues.

“We don’t have the staff, the experience or the funding to be writing grants ourselves,” Rhoades said. “Even some local people in the community who have more experience with grant writing that reached out have told us that we really need a specialist for these types of grants to stand a chance for success. Because you’re competing against large municipalities around the state and they do have the experience and manpower.”

The $25,000 for the professional services contract will come out of the $1.5 million in Pacific Gas & Electric disaster settlement funding that was allocated to the county’s Prevention, Recovery, Resiliency and Mitigation Division (formerly the Disaster Recovery Division) to haul water from the city of Ukiah to the city of Fort Bragg. That program was put on pause earlier this month since the rain replenished surface water sources enough for the coast to manage on its own for now. The county spent less than $50,000 of those funds on the program to date, said Howard Dashiell, the county’s director of transportation and point person for the drought response.

“Redwood Valley would be the recipient of some of these grants so it’s a good investment of the PG&E funds into writing grants for water resiliency because Redwood Valley has a lot of need,” said 1st District Supervisor Glenn McGourty. “This would give us the opportunity to do that.”

The supervisors went with that option for the sake of nimbleness. McGourty said the county is facing a crunch to get the contract in place in time to submit applications to the State Water Resources Control Board (SWRCB) and Department of Water Resources (DWR) within the next 30 days. “It’s potentially oversubscribed,” he said, “so moving quickly would be very important for us to have a fighting chance to be funded.”