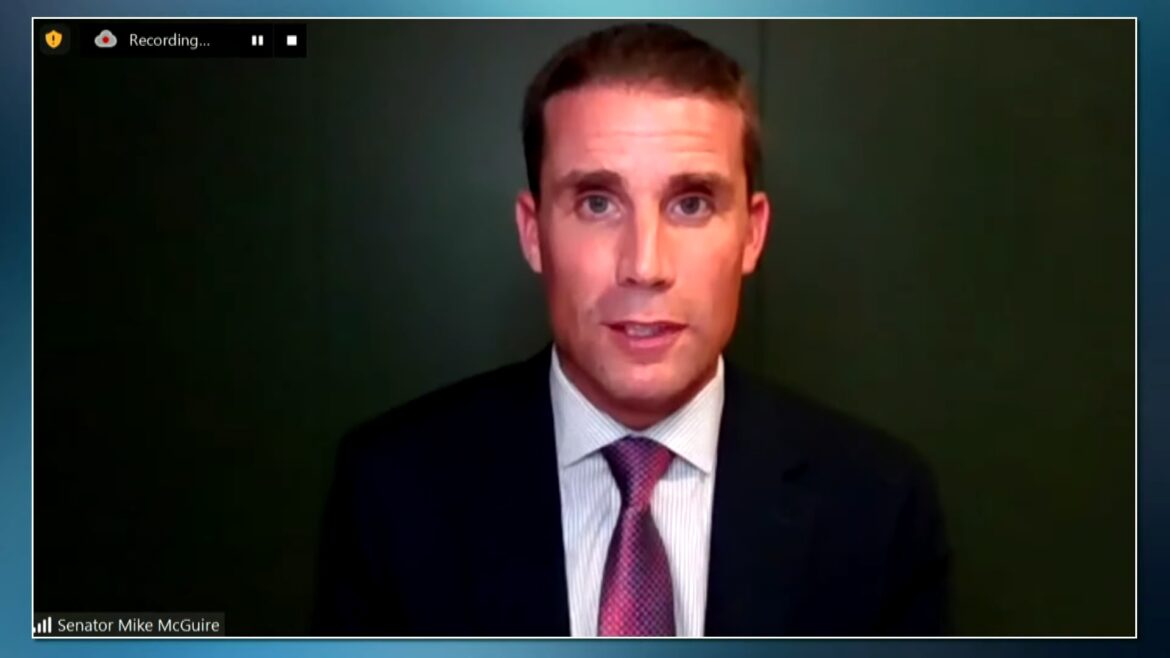 MENDOCINO Co., 10/10/21 — Experts agree, the climate is in a state of crisis. The situation is evolving faster than anticipated and causing destruction up and down the California coast in the form of extreme heat, catastrophic wildfires and unprecedented water scarcity. North Coast State Sen. Mike McGuire and a panel of climate scientists said large-scale action in the form of prescribed fires and updated water infrastructure is needed now at a virtual town hall on the climate crisis in California on Oct. 6.

Peter Miller, director of the western region, climate and clean energy at the Natural Resources Defense Council, said the next few decades are going to be rough regardless of what humans do, but we can mitigate some of the destruction. Miller pointed to the community of South Lake Tahoe, where vegetation treatment, prescribed fire and home hardening had been done to a high degree for over a decade. “When the Caldor Fire came along and was devastating communities on the western slope in El Dorado County, places like Grizzly Flats,” Miller said, “ … few if any homes burned in that part of the county.”

McGuire hosted the town hall on the heels of Gov. Gavin Newsom making a historic $15 billion investment in climate action, along with passing a panoply of climate policies intended to support efforts like prescribed burns to fight wildfire and updating the water system to handle an entirely different pattern of snowmelt and rainfall. “If we don’t act to mitigate climate change,” McGuire said, “our kids’ lives, our grandkids’ lives will be worse off than what we’re seeing here today. I firmly believe that there are solutions, but it’s going to take all of us working together, advancing bold solutions.”

Newsom’s climate package included $5.2 billion over three years to address immediate drought needs while also investing in more long-term updates to the water infrastructure. The package also includes $1.5 billion for wildfire prevention and forest management. Most recently on Wednesday, Oct. 6, Newsom signed Senate Bill 332 into law, which allows tribes conducting cultural burns to have the same protection from liability as a burn boss conducting a prescribed fire if a fire that’s been approved gets out of control.

“My thinking is focused on decoupling fire from catastrophe,” said Daniel Swain, a climate scientist with the Institute of the Environment and Sustainability at University of California, Los Angeles, “because fire itself in the natural landscape is not a bad thing.” The severity of the wildfires in the American West are a byproduct of suppressing the vast majority of beneficial wildfires that maintained the forests in a thinner, healthier state, he said. Making structures more resilient to wildfires is also important, but Swain said the main large-scale solution to the problem of catastrophic wildfires is more low-intensity fires.

The water system relies on snowmelt, which has decreased over time and is expected to continue disappearing. The fast-fading snowmelt has resulted in noticeable issues with how the water system operates, said Kristina Dahl, senior climate scientist with the Union of Concerned Scientists. “Do we need to expand our reservoirs so that we can capture more water when it’s wet?” Dahl said. “Do we need to consider how we’re allocating water to different sources to make sure that we can continue having a thriving agricultural industry in this state? A lot of pieces of that water system need to be examined critically in terms of what the latest science is telling us.” On the North Coast, Dahl said the system needs to be adapted to a pattern of rainfall that is going to be concentrated into shorter seasons and will be more variable from year to year.

“Right now in California, we have an incredibly engineered water system — a system of reservoirs, of pipelines,” Dahl said. “That system was designed for the climate of the past.”