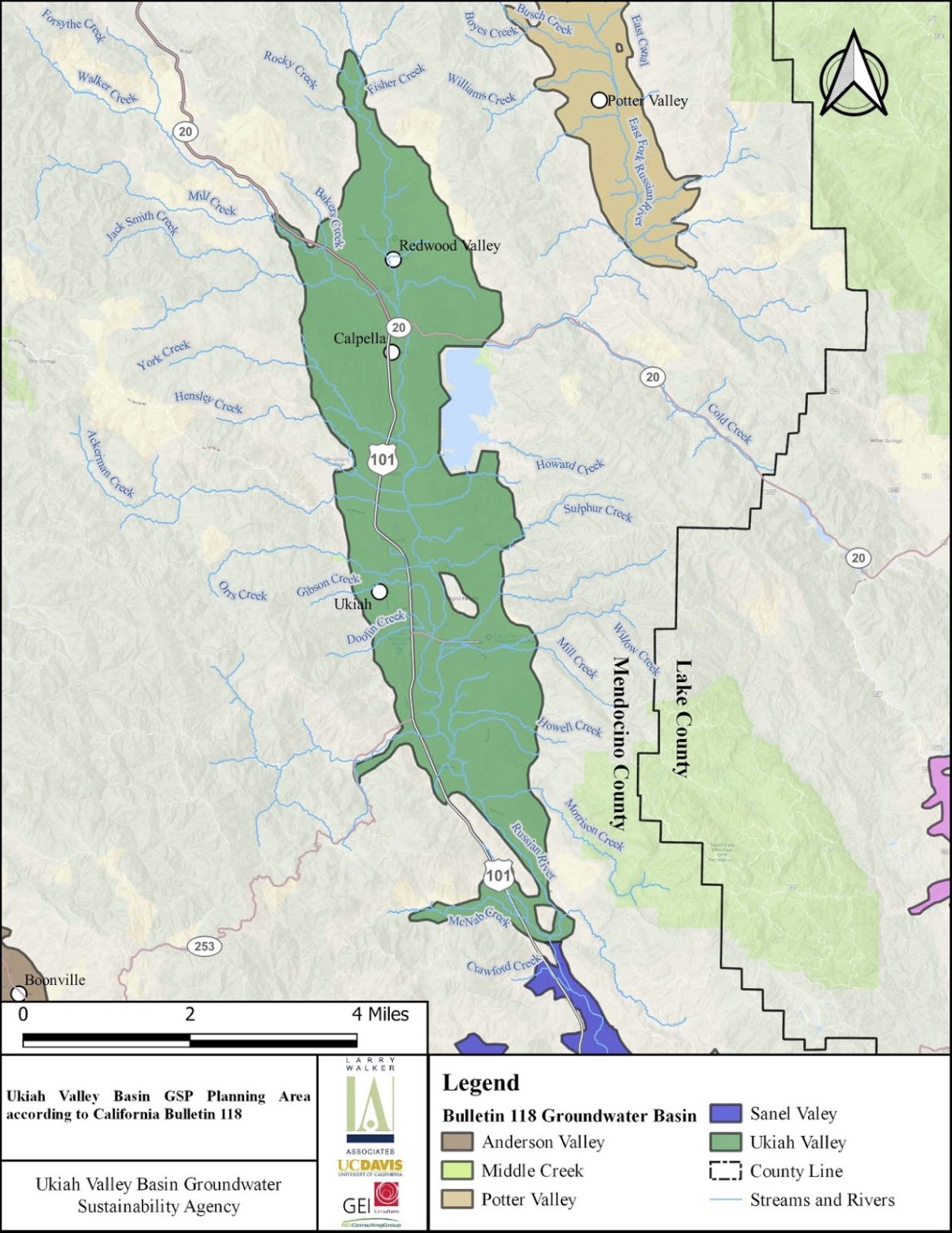 MENDOCINO Co., 9/19/21 — A recently formed local agency tasked by the state with figuring out how to sustainably manage Ukiah Valley Basin’s groundwater for the next 20 years has come up with a draft sustainability plan.

To see a copy of the plan, click here. Anyone interested in finding out more about the plan and review process should attend an informational meeting from 5:30 p.m. to 7 p.m. Tuesday at Todd Grove Park at 600 Live Oak Ave. in Ukiah.

The draft Ukiah Valley Groundwater Sustainability Plan (Ukiah GSP), which is open for public comment until this Friday, Sept. 24, essentially states that currently available data is incomplete, and the agency will need to continue refining the document as more data are collected. The plan describes some of the projects expected to do that, like a proposed project to inventory the county’s wells because the state’s data may be dated, and may include abandoned wells and wells with other quality control issues. Better data is expected to give the Ukiah Valley Basin Groundwater Sustainability Agency (UVBGSA) a better idea of the state of the groundwater supply, how well it’s managing that supply, and what steps it can take to manage the supply better in the future.

The plan still offers a wealth of information about the characteristics of the basin, like how it encompasses 37,500 acres (59 square miles) beneath the Ukiah and Redwood valleys, and the aquifers. Aquifer I has less storage capacity (60,000 to 12,000 acre feet) than Aquifer II, but gets recharged more often because of the permeability of its soil and its proximity to the Russian River, which runs the entire length of the basin. It’s possible that some groundwater flows back out into the Russian River at the southern end of the basin, but there isn’t enough groundwater data from the area to be certain. The plan also adds the caveat that “while historical studies identify recharge to Principal Aquifer I as being through stream losses, there is little data confirming this assertion and recharge in this aquifer is identified as a data gap.” Aquifer II makes up the larger share of the basin and can better store groundwater, likely because of its large concentration of impermeable clay soil. It relies on rain percolating deep into the soil to get recharged.

The aquifers predictably get recharged more during wet years — mostly from October through June, with most of that happening from December to April — and groundwater levels decrease in summer and increase in winter. While fluctuations are normal based on weather conditions, the groundwater level in the valley has remained stable over the past 30 years, according to the plan. It’s hard to predict how long that will be the case given the dramatic shifts taking place in the climate, but near- and long-term projections cited by the plan show a decline in the amount of water entering the basin and an increase in the amount leaving it.

Given those realities, the agency states its goals are to ensure:

Chapter 4 of the plan enumerates projects that are in the works or already done, like the $32 million “Purple Pipe Project” that allows Ukiah to provide farmers, parks and schools with about 325 million gallons of water per year. The plan also provides a list of proposed projects that would ensure sustainability for the future, such as the City of Ukiah’s $3.5 million project to buy undeveloped headwater properties in the western hills, which are important for natural runoff and groundwater recharge to the underlying aquifer.

Putting everything in the plan into action over the next 20 years will have an annual price tag somewhere between $140,000 and $405,000. Initially, that money is expected to come from state and federal sources, though UVBGSA would have to pursue that funding through grants from agencies like the Department of Water Resources and contributions from the agencies that are members to UVBGSA. The state also granted the groundwater sustainability agencies the ability to charge fees for activities like pumping and permitting to cover the cost of managing the groundwater and implementing the sustainability programs. The agency is expected to begin charging fees within five years after conducting a fee study that will determine the most appropriate rates.

The sustainability plan and formation of the UVBGSA resulted from the Sustainable Groundwater Management Act of 2014 (SGMA), a law that is, for the first time, requiring local agencies in medium- to high-priority basins to create plans to sustainably manage their groundwater resources. The Ukiah Valley Basin was placed in the medium-priority category based on factors like population growth, the population’s reliance on groundwater, the number of wells drawing from the basin, and the amount of land being irrigated in the basin (see all eight criteria developed by the state here).

The public review period closes this Friday, Sept. 24. To see a copy of the plan, click here. To download a review form to submit to the UVBGSA, click here. Anyone interested in getting more information can also attend a public meeting on the draft plan and review process from 5:30 p.m. to 7 p.m. Tuesday at Todd Grove Park at 600 Live Oak Ave. in Ukiah.

One thought on “What’s the most sustainable way to manage the Ukiah Valley Basin’s groundwater? Get more data”