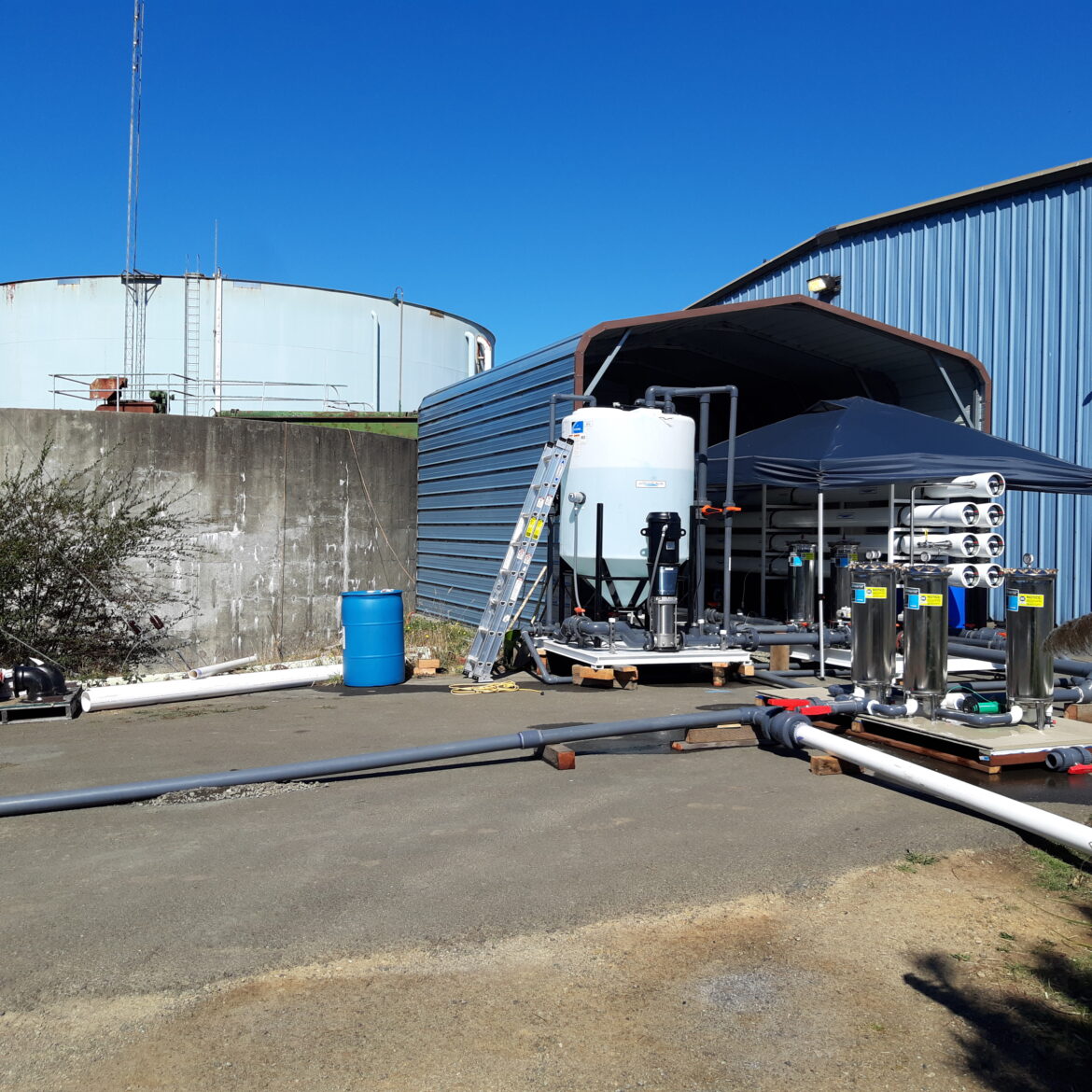 FORT BRAGG, 10/13/21 — Recent rainfall and the arrival of a desalination system are allowing Fort Bragg to reduce the city’s water emergency from a Stage 4 water crisis to a Stage 2 water alert. That means businesses and residents can ease up slightly on their water conservation efforts. The city was also able to pause receipts of water from the city of Ukiah since water deliveries were exceeding demand. Fort Bragg can meet that demand now without outside help.

The Fort Bragg City Council voted unanimously on Tuesday to downgrade the emergency because the condition of the city’s water supply has changed. Summers Lane Reservoir, which was expected to drop to 50% of its 22.6 million gallon capacity by the end of September, is being adequately replenished by Waterfall Gulch, one of the city’s three main water sources, and was at capacity as of Oct. 11. The reservoir provides about 30 days of water to the city, which is currently using about 510,000 gallons of water per day.

The streamflow of the Noyo River, one of the other main water sources, is also sufficient enough to dilute any saltwater intrusion during high tide events. “The challenge we have in the late summer and fall with the Noyo is that when the level of the river drops and we get those high tides, we’re unable to pull water,” said City Manager Tabatha Miller. But even if the streamflow drops in the Noyo again, the city has a newly installed reverse-osmosis desalination plant ready to treat 144,000 gallons per day.

The downgrade means residents and businesses can return to conserving 10 to 20% of what they would in a non-drought year instead of 30 to 40%. Residents can also water their lawns and other landscaping again on Tuesdays and Saturdays from midnight to 9 a.m. and 6 p.m. to 11:59 p.m. Drip irrigation, however, is allowed any day of the week. For a full list of restrictions during Stage 2, visit Water Conservation | Fort Bragg, CA.

The city has no plans to shut off outside water sales anytime soon after resuming them Sept. 8. That was made possible by a mutual aid agreement between Mendocino County, Ukiah and Fort Bragg that allows water to be trucked from inland to the coast. So far, that’s allowed the city to sell 375,000 gallons of water to haulers during the month of September. But now the amount of water that the city’s receiving is more than double the amount it’s reselling. Miller said those shipments were put on pause last week and the city should be able to sell from its own supply in Summers Lane Reservoir.

“The reservoir was approaching capacity and we weren’t going to be able to put that water anywhere,” Miller said. “So we have ceased those, but we are still continuing to sell water to those folks outside of city limits.”

Residents, businesses and visitors succeeded in meeting water conservation goals during previous stages over the summer. Citywide water use in August was 17.96 million gallons, or a 33.2% reduction from the amount used in August 2019. That’s the lowest recorded water use in August for the city, although official record-keeping started in 1980. In September, the city used 16.58 million gallons of water, a 32% reduction from September 2019. “We certainly have to give our customers, our water customers, credit for having made those pretty significant cuts,” Miller said.

Watch the full meeting below: