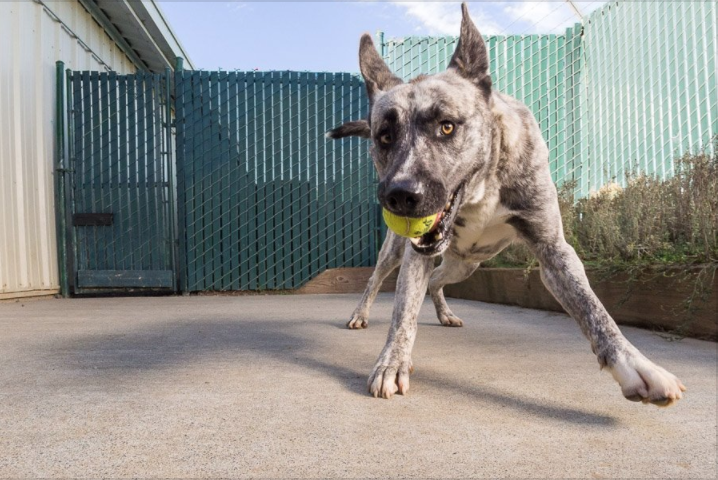 A dog up for adoption at the Animal Shelter from the Facebook post prior to the parvo announcement.

MENDOCINO Co. 1/3/17— The Mendocino County Animal Shelter has re-opened for cat adoptions, picking up lost pets, and purchasing pet licenses, but due to disease control measures from a parvovirus outbreak the dog kennels will remain closed to the public until at least January 13, according to Animal Shelter Director Richard Molinari. One dog, which tested positive for parvo on December 30, has died. However, the shelter will continue to take in lost animals as well as test any shelter dogs showing signs of illness during the current two week quarantine. The quarantine will be lifted if no other canines test positive for the virus.

The shelter closed to the public on Dec. 30 after a dog tested positive for parvo that morning, and was also closed on Saturday, according to Molinari. On January 2 the shelter decided to open for cat adoptions. A previous outbreak of parvo occurred in October; two dogs died in that outbreak and the shelter was closed for decontamination. Parvovirus is extremely contagious and can be fatal, but is also easily preventable with proper vaccinations. Anyone who adopted a dog in the ten days between Dec. 19 and Dec. 30 is advised to watch for any warning signs of the virus and contact the shelter immediately.

Molinari took over managing the shelter from interim director Mary Jane Montana in November, after the previous outbreak. He explained that since the prior outbreak the shelter has contracted with a new “vet of record,” Dr. Patricia Humphrey Warner, DVM. Warner started a part-time contract with the shelter five to six weeks ago. Warner is overseeing the current quarantine and disease control efforts and has instituted the two week quarantine, which in a “best case scenario” will mean the shelter re-opens on January 13. The two week window will restart if another dog tests positive for the disease.

The shelter closure announcement was made in a statement from Mendocino County CEO Carmel Angelo on Dec. 30 and subsequently posted to the shelter’s Facebook page. There are no current notices of the closure on the shelter’s website or the county’s animal control website, but Molinari said he had requested updates to reflect the quarantine information and warning to adopted dogs. He also stated that the shelter would notify the public of any additional infections or changes to the current quarantine, and said he had not received any calls from animals adopted in the window before the infection occurred.

The shelter lacks any “dog isolation areas,” Molinari said, but shelter staff is continuing to test dogs showing any signs of illness. As of Jan. 3 about 10 dogs had been tested — with none testing positive — out of a total of around 85 at the shelter. The shelter is unable to fully quarantine all sick dogs since some of the separate kennel areas must also be used for dog who bite or display other problems.

He explained that all dogs must remain in their kennels during the quarantine to prevent contagion, but that shelter staff are able to care for the dogs by using a decontamination foot bath, disposable shoe coverings, and other disease control measures when entering the dog areas at the back of the building. Foot traffic is limited to necessary staff activities in these dog areas.

According to Molinari, all dogs arriving from animal control and other lost dogs are being held in an outside area in the back of the facility, and about five have arrived since the shelter’s closure. He said all efforts are being made to connect these lost dogs with their owners so they do not need to be taken into the facility, and that the shelter will consult with Dr. Warner if the outside area fills up and dogs must be housed inside.

Molinari also noted that all animals are being vaccinated upon intake as long as they are friendly, and that all animals receive medical care upon intake if needed either from Dr. Warner or other contracted vet care services. He added that unfriendly animals may not receive vaccinations to protect the staff and limit trauma to the animals.

Since parvo can often be prevented with proper vaccinations, Molinari noted that dog owners should “make sure they get their vaccinations for the animals, that would be greatly appreciated,” particularly if they don’t know the entire life history of their pets. He said that since many dogs arrive at the shelter as strays without proper vaccination, ensuring a pet is properly vaccinated “gives them protection for diseases like this.”

The statement posted on the shelter’s Facebook page on January 3 is as follows:

The Mendocino County Animal Shelter is open for citizens that wish to purchase a pet license and look for an adoptable or lost & found cat.

If you have lost your dog, owners can still come to the shelter and meet with staff to locate their pet.

The Mendocino County Animal Shelter will be updating the public with information on a routine basis.

The Mendocino County Animal Shelter is currently closed to the public.

While conducting testing at the animal shelter a dog tested positive for the disease Parvo. To ensure that the disease doesn’t spread and is contained, the shelter is closing the dog and cat kennels to the public & volunteers. This will greatly assist in the process of controlling the spread of the disease.

If you have lost your dog or cat, dog & cat owners can still come to the shelter and meet with staff to locate their pet. If you have adopted a dog in the last 10 days from MCAS and the dog is exhibiting signs of being lethargic, dehydrated, vomiting and diarrhea please contact the shelter at 707-463-4427

With preventive disease control measures in place the shelter is expecting to be open to the public on Jan 3, 2017. This is subject to change.

The shelter will be updating the public with information on a routine basis.