Seth the Dog, who died of parvo at the animal shelter in October - courtesy of Trudy Brooks

Update 1/3/17— See the most recent update on the shelter’s outbreak here.

MENDOCINO Co. 12/31/16— Another dog at the Mendocino County Animal Shelter has tested positive for parvovirus and the shelter is now closed to the public and is under quarantine, according to a December 30 statement released by the the Mendocino County Executive Office. Anyone who has recently adopted a dog is instructed to watch for warning signs of parvo and contact shelter staff immediately. The statement notes the shelter may be ready to be re-opened January 3, but the closure affects both dog and cat kennels.

Parvo is an extremely contagious disease can be be spread easily by contact between animals and lives in soil and other materials for many years. Parvo contamination can be prevented with adequate vaccinations but can also be fatal for young dogs or those that aren’t vaccinated. See more information here.

Anyone who recently adopted a dog from the shelter, particularly in the last 10 days, who is “exhibiting signs of being lethargic, dehydrated, vomiting and diarrhea please contact the shelter at 707-463-4427.”

The Shelter, which is part of the county’s Health and Human Services Department, was previously closed this fall in mid-Octover after the death of several dogs infected by parvo, and the shelter underwent decontamination measures at that time. Since then, Richard Molinari replaced interim shelter manager Mary Jane Montana, who oversaw the previous decontamination effort. as director on November 21.

Anyone missing a dog or cat can still come to the shelter to pick up their animal; the statement does not address how disease control measures are being implemented to prevent new intake animals

Seth the Dog, who died of parvo at the animal shelter in October – courtesy of Trudy Brooks

. The press release states the infected animal was identified during “routine” testing but does not explain how animals are being separated at this time. During the last outbreak, Montana explained the shelter does not have the ability to completely separate animals into a controlled “clean room” due to the shelter’s construction.

The shelter recently held several adoption specials for the holidays. There is no current notice of the closure on the Animal Shelter’s website, which states the shelter is open for regular hours this week. The press release was posted on the shelter’s Facebook page on the morning of Dec. 31 although the shelter’s previous post from Dec. 30 was encouraging adoptions. 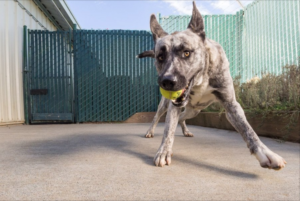 A dog up for adoption at the Animal Shelter from the Facebook post prior to the parvo announcement.

See our previous coverage on parvo at the shelter this fall here, and here.

Here’s the full statement released by County CEO Carmel Angelo on Dec. 30. The statement does not provide information about the state of the dog who tested positive, the decontamination measures, or when the initial positive test occurred. We’ll update with more information as it becomes available.