Seth the Dog, who died of parvo at the animal shelter in October - courtesy of Trudy Brooks

Seth the Dog, who died of parvo – courtesy of Trudy Brooks

UKIAH — One or more dogs at the Mendocino County Animal Shelter have died of parvovirus, usually called parvo, and at least one other is infected, though there are conflicting reports, and the number could be higher. Parvo is a highly contagious disease and generally fatal if untreated. The Mendocino County Executive Office issued a press release on October 12 stating that all dog areas of the shelter will be closed to the public until October 26, while “strict infectious disease control protocols and disinfection” measures are taken under the Veterinarian’s guidance. However, a source who volunteers at the shelter contradicted this account.

According to the press release, Seth the dog first tested positive for parvo “last Saturday” and was “immediately transferred to the Veterinarian [sic]” but did not survive. The dog’s age and breed were not released. Since then, the shelter has tested all shelter dogs who had direct contact with the deceased dog, and is 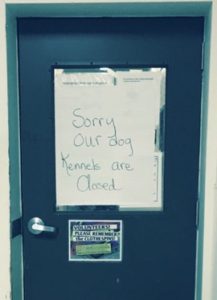 monitoring and testing others that show signs of illness. Out of seven dogs tested on October 11, one more, Romeo the dog, tested positive and has been transferred to Mendocino Animal Hospital.

The release states that the infected animals “are young adults that were vaccinated for parvovirus upon intake to the shelter,” and that all dogs who received parvovirus vaccinations longer than 30 days prior have been revaccinated. Although often lethal, parvo can be prevented with vaccinations. The public will be forbidden from walking, fostering, and adopting shelter dogs until October 26.

According to shelter volunteer and animal foster Monika Fuchs, the outbreak started with three puppies who were brought to the shelter between October 1 and 3, one of which died from parvo 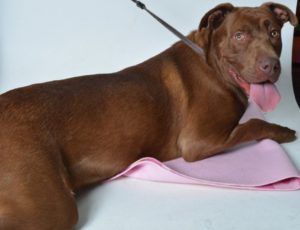 Romeo the Dog, who became ill with parvo and is receiving veterinary care – courtesy of Trudy Brooks

shortly afterwards, but also after being put in general population. Fuchs stated the puppies were not seen by a vet until one had died. The press release does not mention any dead puppy. Fuchs said the shelter was aware of the contagion immediately after the puppy’s death, but allowed adoptions to continue until October 12.

“Why didn’t the puppies get seen by a vet until after one was dead? Why weren’t they quarantined until one was dead?” Fuchs asked in an interview. Fuchs said she learned about the puppies from other volunteers at the shelter but had not seen them herself.

Staff at the county’s animal shelter, which is a division of Mendocino County Health and Human Services, would not comment or provide additional information. Interim Shelter Director Mary Jane Montana was unavailable for comment.

The Mendocino County Sheriff’s Office dispatch administers Animal Control services in the county’s unincorporated areas. When called for comment, no animal control staff were available, but the sheriff’s personnel said that they were not aware of any changes at the shelter, and indicated surprise.

According to the American Veterinary Medicine Foundation, parvovirus is a highly contagious disease that can infect all dogs, and in particular younger dogs and puppies less than four months of age. The virus can be transmitted through “direct dog-to-dog contact and contact with contaminated feces (stool), environments, or people. The virus can also contaminate kennel surfaces, food and water bowls, collars and leashes, and the hands and clothing of people who handle infected dogs. It is resistant to heat, cold, humidity, and drying, and can survive in the environment for long periods of time. Even trace amounts of feces from an infected dog may harbor the virus and infect other dogs that come into the infected environment. The virus is readily transmitted from place to place on the hair or feet of dogs or via contaminated cages, shoes, or other objects.”

The Mendocino County Animal Shelter has been the subject of ongoing controversy and scrutiny over the last year, with volunteers regularly attending Board of Supervisors meetings to share their concerns during public comment. Volunteers have requested increased veterinary care during previous supervisors’ meetings, noting that animals sometimes are not seen by a vet for nearly three weeks after being admitted.

Fuchs describes the shelter as being in an ongoing state of crisis, where supervision is inadequate and animals are left caged sitting in their own waste. In September Fuchs sent a letter to the Board of Supervisors and County CEO Carmel Angelo, requesting county staff increase oversight of the shelter’s management and services. She said she has received no response from the supervisors, Carmel Angelo, Alan Flora, or Montana.

Fuchs said she expected “a larger than usual turnout of volunteers and other concerned animal advocates” at the Board of Supervisors meeting on October 18.

The statement from the shelter notes that several dogs in the county have recently contracted parvo, and recommends dog owners make sure their dogs are vaccinated, stating “The County’s Animal Care Services will be providing a Low/No cost mobile vaccination clinic at the Veteran’s Service Office in Ukiah at 405 Observatory Avenue on November 8, 2016, from 9am until noon.“

Ukiah, California: October 12, 2016 Shelter Parvovirus Update: Last Saturday a shelter dog (Seth) tested positive for parvovirus, he was immediately transferred to the Veterinarian but sadly did not survive. Since then we have been monitoring and testing all shelter dogs that had direct contact with the positive dog and any dog showing any signs of diarrhea or vomiting since. 7 dogs tested were tested yesterday, one dog tested positive and has been transferred to the veterinarian for treatment. Shelter staff is continuing to test all dogs that show any signs of diarrhea, vomiting, lethargy or other clinical signs.

Under the guidance of the Shelter veterinarian, the shelter has commenced strict infectious disease protocols and disinfection of all shelter areas. The dog areas of the shelter have been closed to the public and will remain quarantined until October 26. There will be no dog adoptions, fostering or dog walking until that time. The cat areas are still open to the public. The dogs that have contacted the disease are young adults that were vaccinated for parvovirus upon intake to the shelter. As an extra precaution all shelter dogs that were vaccinated more than 30 days ago are being re-vaccinated.

There have been several other cases of parvovirus throughout the County so please be sure your dogs are vaccinated. If you cannot afford to provide vaccinations for your dog County Animal Care Services will be providing a Low/No cost mobile vaccination clinic at the Veteran’s Service Office in Ukiah at 405 Observatory Avenue on November 8, 2016, from 9am until noon. If you have any questions please contact Mary Jane Montana with the Ukiah shelter at 463-4427 from 10 to 5 pm Tuesday through Saturday or via email at [email protected]

Yet another animal care crisis at the county operated Ukiah animal shelter. So far two dogs have died and a third one is being treated at the Mendocino animal hospital.

As far as I know, three puppies came into the shelter October 1 or 2. All three were put in one kennel together in the general outside kennels. One puppy was found dead in the kennel.  There are many questions that are unanswered by Shelter staff and management. Where the puppies evaluated by veterinary staff prior to placing them into the general population?  Why did it take a whole week before any serious efforts where made to protect the other shelter dogs from exposure to this deadly virus?  The adult dog Seth who was infected and died, had he been medically evaluated when entering the shelter?  What are the vaccination protocols for incoming dogs?  It has been clearly documented by volunteers numerous times in front of the board of Supes that animals often wait 20 and more days before a vet sees the animals. This is not the first deadly disease outbreak at the shelter and it will not be the last one, unless stricter oversight and regulations are enforced and shelter management is held responsible for their inaction.