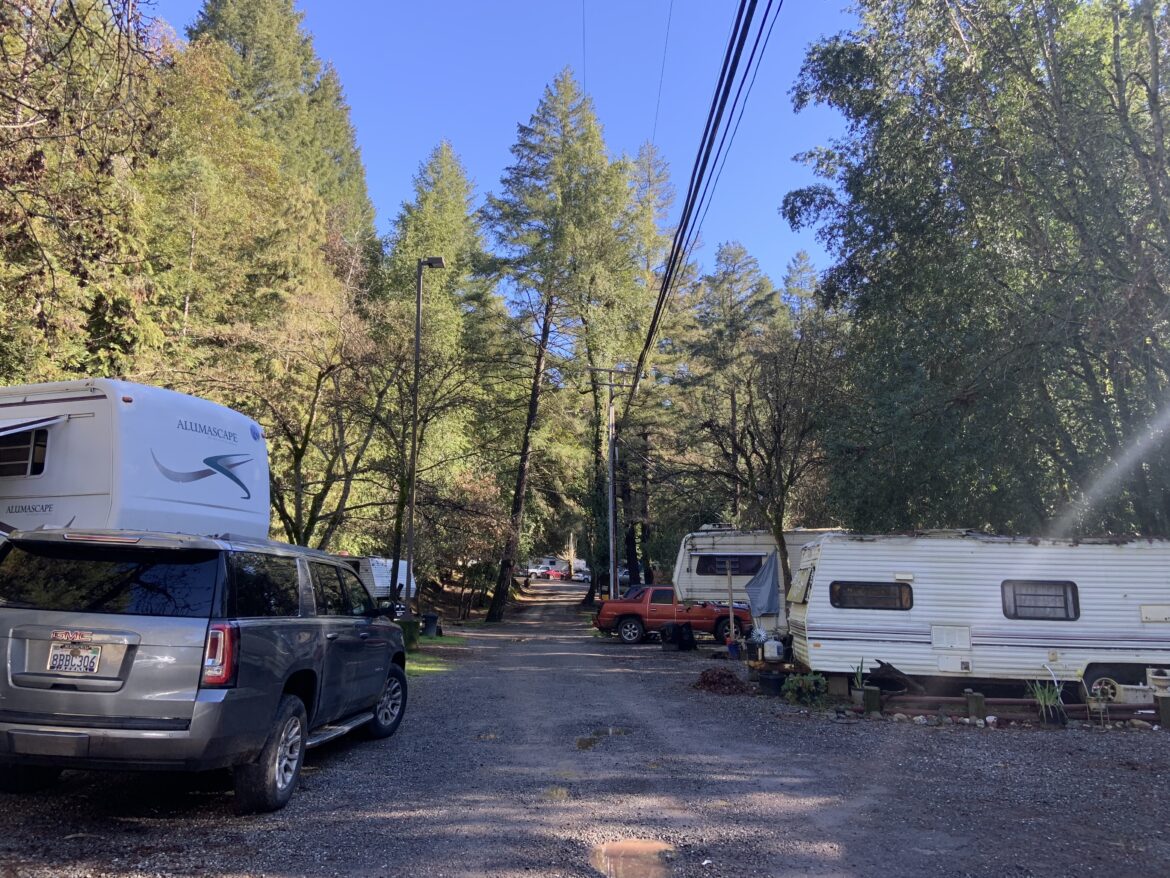 WILLITS, CA, 1/25/23 — Move-out has begun for residents of Creekside Cabins & RV Resort, as a temporary bridge has been installed crossing the sinkhole that opened Dec. 30 and blocked all ingress and egress to the property. Following Public Health’s declaration of a local health emergency due to “very high” levels of E. coli in the property’s water supply, on Tuesday night Mendocino County announced plans to pursue litigation against Creekside owner Teresa Thurman and her company, Houser Holdings, Inc.

A lawsuit would “address ongoing hazardous conditions at the site,” per the county’s news release. The county also has concerns about salmon and steelhead habitation in the creek running alongside the property, per statements in news releases and by County Counsel Christian Curtis.

“While investigating the site and providing evacuation services, County staff have witnessed illicit discharge of sewage material into the adjacent waterway, and have subsequently contacted the Department of Fish and Wildlife, which will investigate the site for criminal violations,” Tuesday night’s news release read.

County Counsel Curtis told The Voice on Wednesday that he has not previously worked on litigation “quite like this” for Mendocino County. But following evacuation efforts that are ongoing Wednesday and Thursday, the county expects to sue Thurman to force clean-up of the “threats to health and human safety” in terms of contamination on the property.

“The obligation of the property owner is to clean that up and to ameliorate the conditions that are causing that,” he said. “So the litigation would be to go ahead and fix that, and to bring the property into compliance.”

Thurman gave public comment at a board meeting on Tuesday, asking the county to set up a meeting with her to discuss solutions to aid Creekside residents, many of whom are currently relocating. The county and Caltrans have maintained since Dec. 31 that any permanent repairs to the culvert would be Thurman’s responsibility, and that she has not filed the necessary permits; when asked by Supervisor Ted Williams about her plan for fixing the road, Thurman said the easement is not under her purview.

The county allocated $250,000 to a contractor to install a temporary bridge and relocate residents due to the health emergency. The size of the bridge and the park’s location off Highway 101 means the crossing will only be in place a short time, as it “requires one-way controlled traffic and would create a safety hazard for motorists if left unattended.” Residents have been given just two days, or 16 hours, during which to move out of their homes.

Further, Curtis told the board that the time for speedy, permanent repair allowing vehicle access to Creekside has likely come and gone.

Thurman said in the meeting that the water on the property tested negative for E. coli this weekend, but that the county wanted to extend a Boil Water Notice even so. Public Health Officer Andrew Coren maintains that E. coli and other waterborne bacteria remain a threat on the property.

In the meeting, Thurman pointed out that San Luis Obispo County was recently able to deal with a culvert in danger of collapsing in a matter of days. However, according to a news release, Chimney Rock — the area in question — is counted among the “1,349 miles of road maintained by County of San Luis Obispo Public Works.” By contrast, the collapsed easement north of Willits connects private property to a state highway.

Danilla Sands of Mendocino Action News wrote on Tuesday that the temporary bridge is 102” wide at its base and 107” at the railing, meaning that given the size of some trailers and tow trucks, navigating vehicles across and off the bridge could be quite an arduous process.

Further, some residents have been concerned about facing penalties for their unregistered trailers, which many had not expected to be mobile again due to long-term residency at Creekside.

“The Mendocino County Sheriff’s Office has advised our partner law enforcement agencies of the emergency evacuation and subsequent concerns,” the county wrote in an FAQ document.

The Mendocino Voice will continue to provide updates on the crisis at Creekside Cabins. Read our past coverage, including interviews with residents, here.