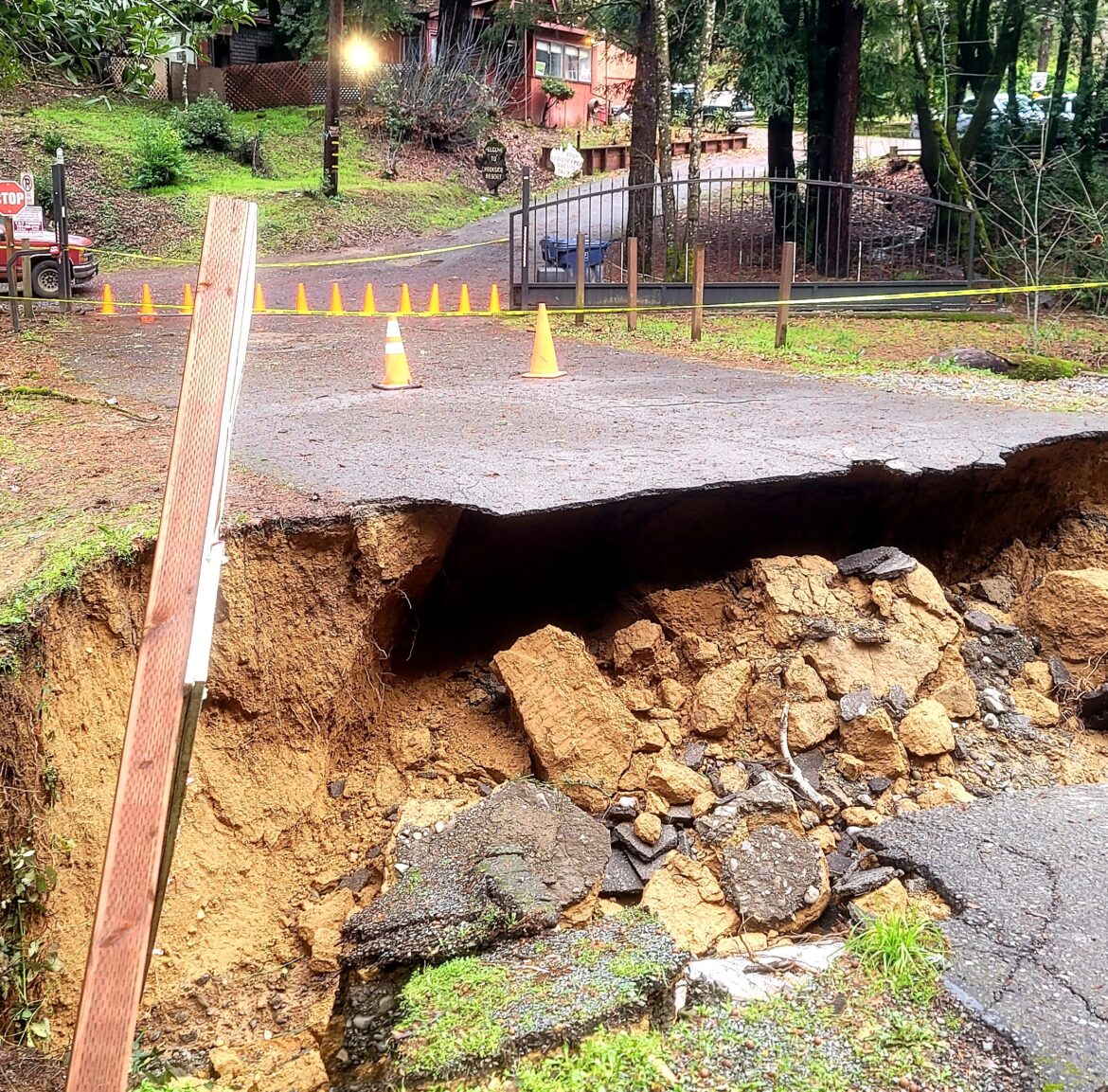 Editor’s note 1/17/23: for the latest on the sinkhole situation, see our most recent reporting here.

WILLITS, CA, 1/12/23 — At Creekside Cabins & RV Resort, a mobile home park in Willits, it’s been 12 days since a sinkhole opened at a culvert entering the park and swallowed the roadway, rendering it impossible to drive onto the property. With 50 spaces in the park, dozens of residents of all ages — from older adults to a newborn baby — have been left unable to reach jobs, pick up supplies, or promptly access emergency and medical services. Without trash pickup, garbage is accumulating. Septic tanks flooded by rain can’t be pumped. A few cones separate the gaping hole full of water from the busy thoroughfare of Highway 101.

“We feel like we’ve been forgotten, or we’re just being patronized,” resident Steffanie Darr told The Mendocino Voice in a phone conversation. Darr relies on oxygen tanks, and says she’s made it this long because of the care of her son, who acts as her In-Home Support Services (IHSS) provider. She added, “I think if everybody cared like they say they care, it would have been fixed already.”

The county expanded on this in a news release Wednesday afternoon. Although Caltrans and a variety of state and local agencies responded to the emergency at Creekside initially, Caltrans informed the county on Dec. 31 that the property owner was deemed responsible for the repair and replacement. (Section 845 of the California Civil Code states that the owner of an easement is responsible for maintaining it).

“An encroachment permit will be required to conduct work within the Caltrans right of way,” a Caltrans representative wrote to The Voice on Thursday morning. “Our Permits office has been in contact with both the property owner and their contractor since Saturday, Dec. 31 to assist and expedite any permits needed. To date, Caltrans has not received a permit application for this location.”

The owner, Teresa Thurman, had selected a contractor who was authorized to start work on an emergency basis, according to the county news release. But since work has not begun, Haschak told The Voice that the Department of Housing and Urban Development (HUD) issued a notice of violation to the owner over the weekend regarding the access issue.

To resident Darr, the question of financial responsibility is secondary. She worries “someone’s going to die,” whether a resident on the property who can’t be reached by an ambulance or a driver veering off Highway 101.

“When you’re in the hospital, saving lives, you don’t think about money,” she said. “You just do it. If somebody’s coding in the ER, you’re going to save that person. You have a job to do. … They need to build it now and bill later.”

It’s unclear whether the county will pursue this kind of intervention.

“Mendocino County Social Services continues to assess the needs of and provide assistance to the tenants on the property, but the county does not have legal authority to gift a business with resources to meet the landlord’s obligations,” the county wrote in its Wednesday news release. “The county is evaluating the need and ability to expedite enforcement and abatement action based on any immediate health and safety needs of the residents.”

Meanwhile, residents — many of whom are low-income or receive Social Security — remain more or less trapped on the property, with the only exit route a small footbridge where they could be picked up from the busy highway.

Danilla Sands, the founder of the nonprofit United Disaster Relief of Northern California (UDRNC), has been to Creekside twice with her volunteers, carrying supplies over the footbridge to access the property. UDRNC has delivered canned goods, sleeping bags, toilet paper, paper towels, toiletries, diapers, and batteries, and Sands hopes to drop off more supplies and fresh produce before the end of the week. She has also made herself available to residents to text and communicate their needs and concerns.

“Thanks to ‘Mendocino Action News – Fire, Traffic and Other Emergencies’ run by Danilla Sands, I have been able to alert my son to a fire near him and to evacuate my disabled husband and our pets from the Oak Fire in September 2021 before the Sheriff was able to reach us,” wrote Janet, a Creekside resident who asked to be identified only by her first name. She added, “Danilla and her team of volunteers continue to help those of us stuck here stay calm while facing the unknown over the last 11 days.”

Thurman, the owner, told The Voice that she and the county had been working well together in the days following the sinkhole’s appearance. She said she had understood that residents were supposed to be evacuated on Jan. 4 due to safety concerns ahead of the next storm, by order of the fire department, but residents were never evacuated. Haschak clarified that the county can only force an evacuation in specific circumstances, such as a wildfire.

Social Services reported that they have also visited residents at Creekside and established safety plans, going door-to-door to assess their needs. Supplying oxygen to those who need it has been a key part of their role, Haschak said; he told The Voice that representatives from Social Services have gone to Creekside about every other day.

According to Thurman, at least 25 tenants told her they did not have safety plans, and she shared this information with the county.

Several sources told The Voice that motel rooms or hospital beds have been offered to some residents, but many want to stay in their homes with their belongings and pets.

“The stage that they’re in, it’s different than a fire — it’s an unknown territory, if you will,” Sands told The Voice by phone. “They’re already confused there, so [it’d be difficult] right now to go somewhere else without their items. So, a lot of them are just deciding to stay.”

Darr said her heart condition has been exacerbated by the stress of the experience, and that she can see the situation “wearing on everybody’s emotional state.”

“I truly feel all this is occurring because we’re low-income out here,” she said, adding, “We’re surviving out here, because that’s all we can do.”

5 thoughts on “Sinkhole cuts off vehicle access for dozens in Willits, 12 days and counting: “We feel like we’ve been forgotten””