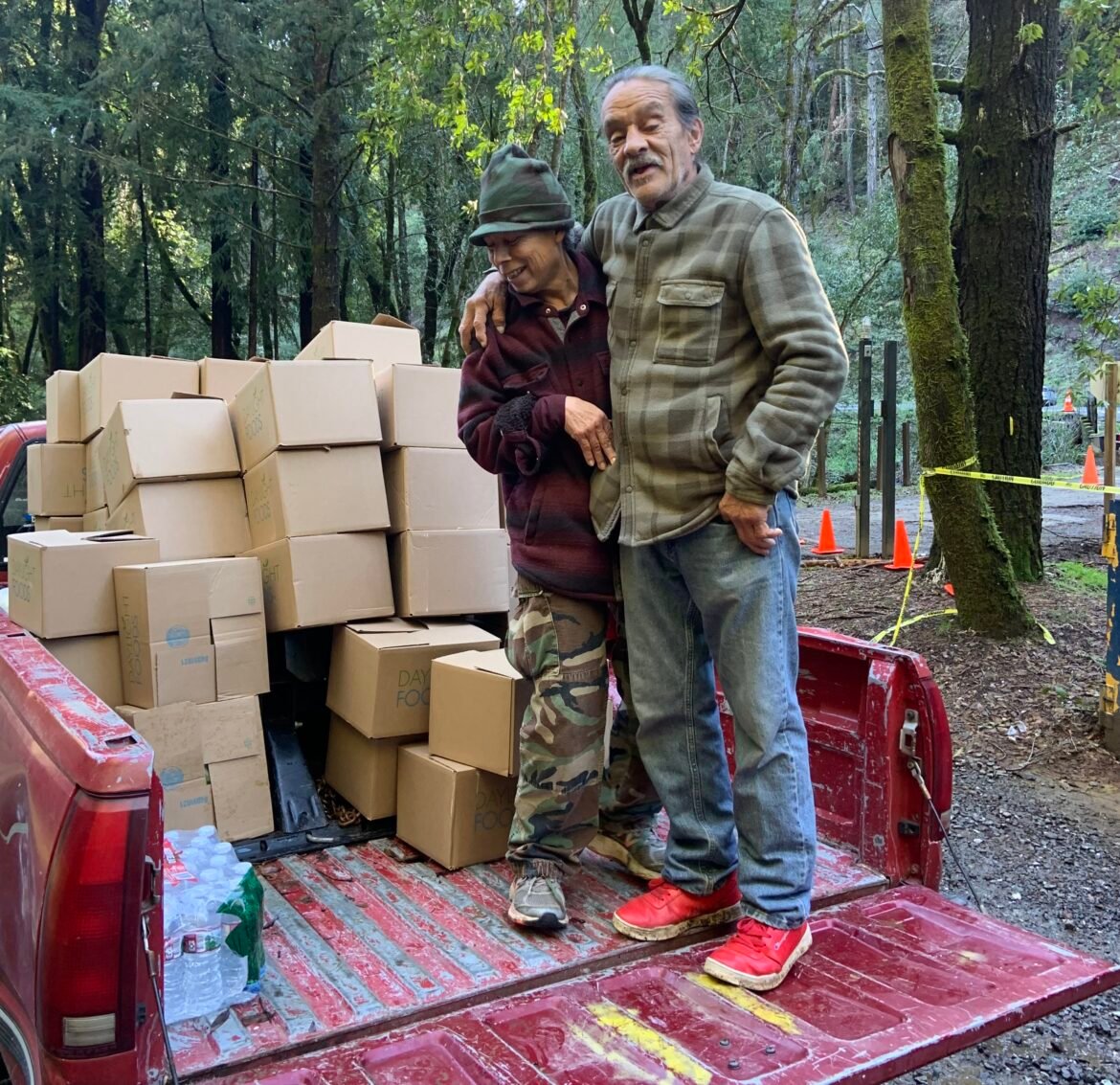 Creekside residents Mitzi and Randy loading a truck with food supplies. In the background, the sinkhole that swallowed a culvert leading to their home. (Kate Fishman/The Mendocino Voice)

WILLITS, CA, 1/23/23 — On Saturday morning, a smattering of residents of all ages streamed to a small footbridge adjacent to Creekside Cabins & RV Resort to meet volunteers from United Disaster Relief of Northern California (UDRNC). A well-oiled machine, residents began unloading more than 100 boxes of fresh produce onto small wagons to haul across the wooden bridge, depositing the food in the back of the managers’ truck to drive to families around the property.

Mitzi, a carpenter and grandmother, leapt from the truck bed to the ground after securing the food. She’s done this several times in the more than three weeks since it became impossible to drive vehicles into or out of the RV park, due to the sinkhole that swallowed the park’s entrance onto Highway 101 on Dec. 30.

“I was trying to pack some stuff, but I’ve got to help,” she told The Mendocino Voice. “I can’t sit in there knowing everybody’s out here.”

Mitzi had to pack because, as of an announcement last week, a temporary bridge will be in place for two days only, on Jan. 25 and 26, to allow residents to exit the park. Caltrans determined the failed access road was the responsibility of the landlord, Teresa Thurman, but she has not filed permits to begin necessary repair work to the culvert. After the temporary bridge is removed on Jan. 27, there are no plans to make the park accessible for garbage collection, propane delivery, septic processing, or emergency services, all the operations that make a place livable.

At noon Saturday, the Public Health Department of Mendocino County declared the park officially closed due to a health emergency: “Very high” levels of E. coli were found in the wells, and a Boil Water Notice was issued. Public Health also reported that sewage and graywater were draining onto the ground and toward the creek, meaning “prevalence of waterborne bacteria and waste is an immediate and proximate threat to the public health of residents.”

One family said they’ve received similar advisories after storms in the past; another resident said the water has always been clean. But all residents The Voice spoke with on the matter felt the bacteria concerns were an excuse to remove them from their homes.

“Nobody has anywhere to go,” Mitzi said. Her RV is unregistered; she and her husband hope to store it at a friend’s house. They’ll then seek housing in San Francisco under a Section 8 voucher. Uncertain how things will work out, she said, “We’ll probably stay in our car.”

Taken at face value, the phrase “mobile home” might conjure a life easily packed-up and moved. But many residents have called Creekside home for years; some have been here decades. Some RVs, even the ones that aren’t too old to be accepted into most parks, are no longer driveable. Some couldn’t even safely be towed. What’s more, the space around many RVs holds furniture and belongings; one family has a beautiful shrine to a relative who died. People chat and check in on one another; kids play together.

“If I had to live in a trailer park, this would be the one I would choose,” said James Eads, who’s lived among the madrone, bay, and redwood trees at Creekside for five years with his wife and six children. “Because you get to live in beauty. You don’t feel so bad about your situation, and your self-esteem remains at a higher level.”

He added, “I understand some people might want or need to move, and they should have that right, and those services should be offered. But, mandatory? Not everybody has the same opportunities.”

Eads’ family plans to leave because, as multiple families told The Voice, Child Protective Services (CPS) told them that by remaining in the park, they risk their kids being removed from their care.

“It seems like they just want this place to go away,” Eads said. “And they’re not addressing the problems that are deeming this place unsafe.”

As of Friday evening, seven of the 27 households Social Services had made contact with were not planning to leave upon installation of the temporary bridge, Director Bekkie Emery told The Voice.

That’s probably because options are limited for many Creekside residents, especially with only a week to prepare. Most households receive California Food Stamps (SNAP/EBT), Supplemental Security Income (SSI), or Social Security Disability Insurance (SSDI). By one resident’s estimate, rents range from $495 to $595, and some receive reduced rent in exchange for administration and maintenance work.

“Finding permanent housing for these individuals is going to be a challenge,” Emery said. Around the county, costs are only climbing, and finding available rental space is its own hurdle.

One RV park has offered Creekside residents temporary space for up to 30 days, after which they would have to find a more stable solution. But many don’t see this as a viable possibility; a resident named Monty told The Voice, “Going to a KOA for a month to be homeless is not an option.”

Another resident told The Voice he’ll be away having surgery after being hit by a bus last year, making it impossible for his family to move on Wednesday and Thursday when the bridge will be open.

Emery’s department has set up a phone line for Creekside residents only, available Monday and Tuesday from 9 a.m. to 2 p.m. The property is a cell service black hole, many don’t have reliable Internet, and five households don’t have phones at all — but the owner has said residents can use the office phone for these kinds of calls. A worker from Social Services will take down their demographic information and attempt to connect them with services to ease the transition.

“Flying the plane while building it”

Characterizing her department’s response to the crisis, Emery said Social Services has been “flying the plane while building it.” No one expected a sinkhole to swallow the culvert just before the new year, and since then residents have contended with power outages and limited access to oxygen supplies, among other challenges.

Code Enforcement, the Sheriff’s Office, Public Health, the CEO’s Office, and other county and state departments, agencies, and elected officials have been intensely involved in determining a response.

“There’s a lot of environmental concerns that I have in this situation,” Emery said. “And they range from the E. coli, to people that are parking and crossing the highway, to this footpath [alongside the sinkhole] that may or may not be safe.”

The best solution would have been a permanent repair to the culvert, but as the county has indicated in numerous releases, Thurman has not given any sign of plans to move forward with that replacement. Although estimates for culvert replacement and repair costs vary wildly, it’s safe to say that a permanent project would have cost less than or equal to the $250,000 the county will pay to have a bridge in place just Wednesday and Thursday.

Further, the bridge installed by contractor Wylatti Resource Management, Inc, will be exit-only aside from towing companies assisting with moving. It will also only be open 8 a.m. to 5 p.m. those two days, in order to safely manage traffic on Highway 101 during hours of highest visibility.

“What I do appreciate is the partners that we’ve reached out to recognize that this is an emergency circumstance — they’re doing what they can,” Emery said. She added, “Our community comes together like nobody’s business when it comes to disaster.”

One woman who runs a mobile home park in Laytonville came to Creekside on Friday to let residents know that she has some space, even offering to help them move with her truck.

Further, UDRNC has partnered with international food provider World Central Kitchen to deliver produce and meals to residents while they’ve been cut off. The nonprofit has also received funds from the Mendocino County Community Foundation to welcome residents in to receive the benefits of its Ukiah disaster recovery center for up to three months. UDRNC founder Danilla Sands and her volunteers spent hours Saturday taking down the names, contact information, and needs of residents in order to reach them during this critical period.

Sands told The Voice that the Community Foundation is also working to get UDRNC’s parent organization North Coast Opportunities (NCO) a Critical Needs grant for Creekside residents, which will help with funds for people moving into new rentals.

Few of us can imagine what it’s like to lose the ability to drive to and from our homes in the blink of an eye. Monty said he has been hitching rides or even walking to his job as a line cook in Willits.

“I’m the only one in this park that still has a job,” he said. Walking to work takes him two-and-a-half hours.

Mitzi said being cut off from the outside world has been very stressful.

“It’s not easy,” she said, keeping one eye on the truckful of supplies in case she needed to jump in and help. She said her husband, Randy, started smoking again because of the struggles of the past few weeks.

“I missed a couple appointments with my psychiatrist,” Randy told The Voice. “I just started seeing him not too long ago, and that really, really, really helps me. … It’s been a real big setback.”

After the temporary bridge is removed — which the county says could damage footpaths residents currently use to enter and exit the property — those who remain in the park could find themselves even more isolated.

“We would not be able to provide the ongoing supports that we have been,” Emery told The Voice, adding, “I hope that they choose to relocate.”

9 thoughts on “Creekside residents have two days to move: “They just want this place to go away””