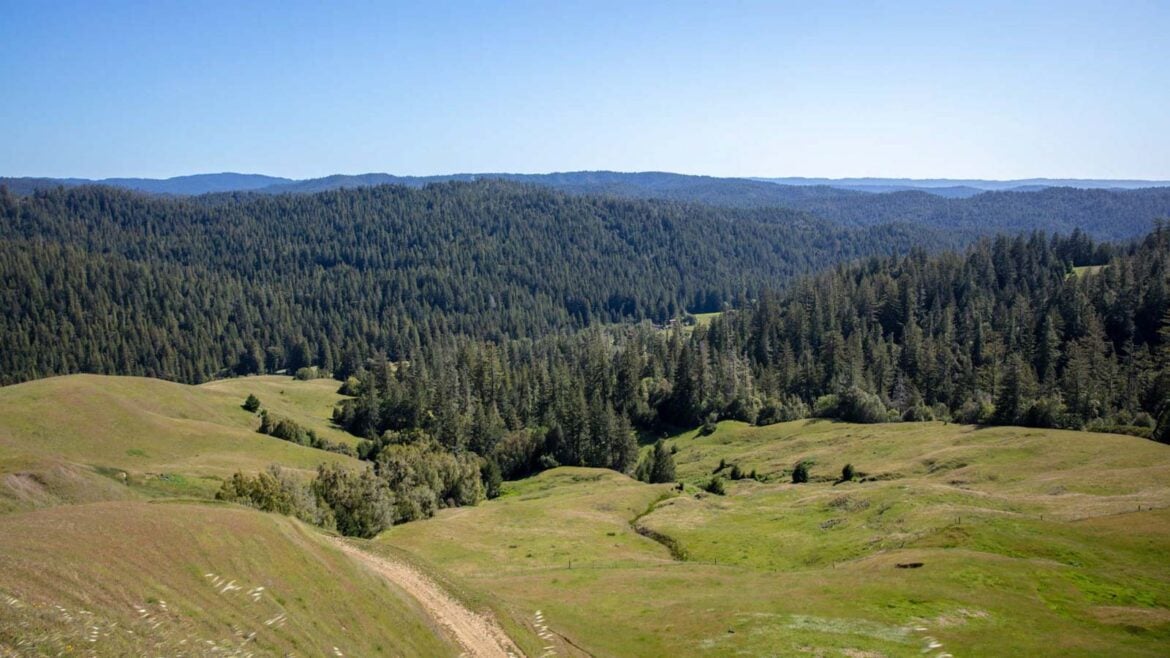 MENDOCINO Co, CA, 10/26/22 — Save the Redwoods League has secured an opportunity to purchase a conservation easement on Mendocino County’s 3,862-acre Weger Ranch, in a deal that would be the “cornerstone of the Montgomery Woods Initiative.”

Weger Ranch has historically been managed with timber harvest every 12 years, ensuring a “multi-aged, diverse forest structure” meant to enhance wildlife and riparian habitat while continuing to allow productivity. Save the Redwood League hopes to further cultivate those habitats with new restrictions. The initiative began with the purchase of Atkins Place last month; the transaction announced this week would include an 80-acre portion of Weger Ranch to be incorporated into Montgomery Woods State Natural Reserve.

“We’ve devoted decades and tremendous effort demonstrating how a working forest can actually be nurtured back to its former glory while retaining productivity,” said Lisa Weger, who implemented this ambitious sustainable forestry program with her husband, a registered professional forester. “This opportunity with the League allows us to preserve what has been accomplished here and demonstrate it for other forest landowners interested in light-touch, sustainable forestry.”

Read more in the news release:

San Francisco, Calif. (October 25, 2022) — Save the Redwoods League today announced that it has secured an opportunity to purchase a conservation easement on the 3,862-acre Weger Ranch. Weger Ranch shares a 1.25-mile border with Montgomery Woods State Natural Reserve. This conservation easement will enable the League to buffer the old-growth redwoods in the park and expand redwood conservation in this vital corner of the coast redwood range. The property is the sixth-largest individual property and the largest non-industrial private forest in the Big River watershed, offering the League a unique chance to protect a vast, biodiverse redwood forest in the region.

The easement marks the League’s latest effort in fulfilling its Montgomery Woods Initiative.  The Initiative, first announced in September, began with the purchase of the 453-acre Atkins Place property and continues in partnership with California State Parks to enhance visitor amenities within the old-growth grove of Montgomery Woods State Natural Reserve. The transaction announced today would also include the purchase of Rocky Ridge, an 80-acre portion of Weger Ranch that would be incorporated into the Reserve.

“This easement is the cornerstone of the Montgomery Woods Initiative, because of the scale of conservation that it secures,” said Sam Hodder, president and CEO of Save the Redwoods League. “This is an incredible property with a decades-long history of sustainable, science-based forest management, and guaranteeing that sustainable management forever is a huge victory.”

With the Atkins Place acquisition and the opportunity to protect Weger Ranch adjacent to Montgomery Woods, the League is assembling a conserved landscape of more than 11,500 acres in the upper reaches of the Big River watershed. Protection at this scale contributes to California’s 30×30 goals for landscape protection, carbon storage, and biodiversity.

Weger Ranch contains a mix of coast redwood and Douglas-fir forest, with nearly 400 old-growth trees scattered throughout the property. Under the easement, the owners would retain property rights, but the land would be forever protected from subdivision, development, and aggressive logging, regardless of who owns it or how many times the property changes hands.

A key provision in the easement reduces the total number of legal parcels from 37 to 3, eliminating the possibility that this land will be sold off piecemeal for development. The easement also establishes 62 acres of reserve areas where the forest will be allowed to return to old-growth condition.

Weger Ranch was acquired by Donald Weger over a 25-year period, commencing in 1941. For the past three decades, the owners have set a high bar for innovative forest management in the region. Two ownerships manage the forests under two active Non-Industrial Timber Management Plans. Trees are selectively harvested on a 12-year cycle such that the harvest level in board feet of lumber is always less than growth of the forest. Timber stand volume, size, and quality increase following each subsequent harvest cycle. This selective, light-touch approach results in a multi-aged, diverse forest structure that benefits streams and wildlife. These practices will continue under the conservation easement, along with additional restrictions in riparian zones and protection of all residual old-growth trees.

“We’ve devoted decades and tremendous effort demonstrating how a working forest can actually be nurtured back to its former glory while retaining productivity,” said Lisa Weger, who, with her husband Craig Blencowe, a Registered Professional Forester, have implemented this ambitious sustainable forestry program on the property. “This opportunity with the League allows us to preserve what has been accomplished here and demonstrate it for other forest landowners interested in light-touch, sustainable forestry.”

A fee acquisition of Rocky Ridge, an 80-acre parcel bordering both Montgomery Woods and a Bureau of Land Management parcel, is included in this agreement. The parcel contains old-growth redwoods, Douglas-firs and the headwaters of Montgomery Creek, which flows through the heart of the Reserve’s old-growth. The center of the property contains a large rock outcrop that provides peregrine falcon habitat. The League will donate the land via a direct deed from the owners to California State Parks. This addition to Montgomery Woods provides an opportunity to expand the Reserve’s trail network to a ridge overlooking the grove’s old-growth canopy and the surrounding landscape.

“What the current owners have achieved in terms of sustainable forestry on Weger Ranch is truly amazing and can be an inspiration for other private forest owners,” said Adrianna Andreucci, land protection manager with the League. “This is a beautiful property with so much going for it—mature, healthy forest, thriving wildlife habitat, and riparian function—all adjacent to a treasured redwood park. We are thrilled with the opportunity to lock in its protection.”

Building on the Montgomery Woods Initiative

Save the Redwoods League launched the Montgomery Woods Initiative earlier this year with the opportunity to protect Atkins Place.  We completed the purchase of that property in late August for $1.18 million. In addition to the purchase price, the League raised $120,000 for stewardship and transaction costs. The League and partners California State Parks intend to eventually fold the property into the adjacent Montgomery Woods State Natural Reserve to both broaden the park’s recreational opportunities and buffer the old-growth redwood forests within it.

As a key component of the Montgomery Woods Initiative, the League also has embarked—in partnership with California State Parks—on the first phase of work to improve the Reserve’s recreational opportunities while protecting the natural resources in the heart of the old-growth grove. The project’s initial phase, already underway, will reconstruct and expand the 2-mile perimeter loop trail to protect damaged redwood roots and water crossings. The second phase will create an immersive grove path to bring visitors onto the valley floor. New features will include gathering areas, a bridge overlooking Montgomery Creek, and inclusive interpretive exhibits. Teams also will restore areas where extensive existing social trails have damaged the ecosystem. The work is expected to be completed in stages through 2025.

Funding already secured for the Weger Ranch easement includes a $9.5 million grant from Cal Fire’s State Forest Legacy program and a $3.42 million grant from the State Coastal Conservancy. The League must raise $1 million in private philanthropy in order to complete the purchase of the $14 million conservation easement and protect the ranch in perpetuity.

Save the Redwoods League has protected more than 37,500 acres in Mendocino County to date, many in some of the county’s most beloved parks and reserves, including Mendocino Headlands State Park, Sinkyone Wilderness State Park, Navarro River Redwoods State Park and Hendy Woods State Park. The League recently purchased the 3,181-acre Lost Coast Redwoods property and donated a 523-acre redwood forest known as Tc’ih-Léh-Dûñ to the InterTribal Sinkyone Wilderness Council, returning Indigenous guardianship of the land.