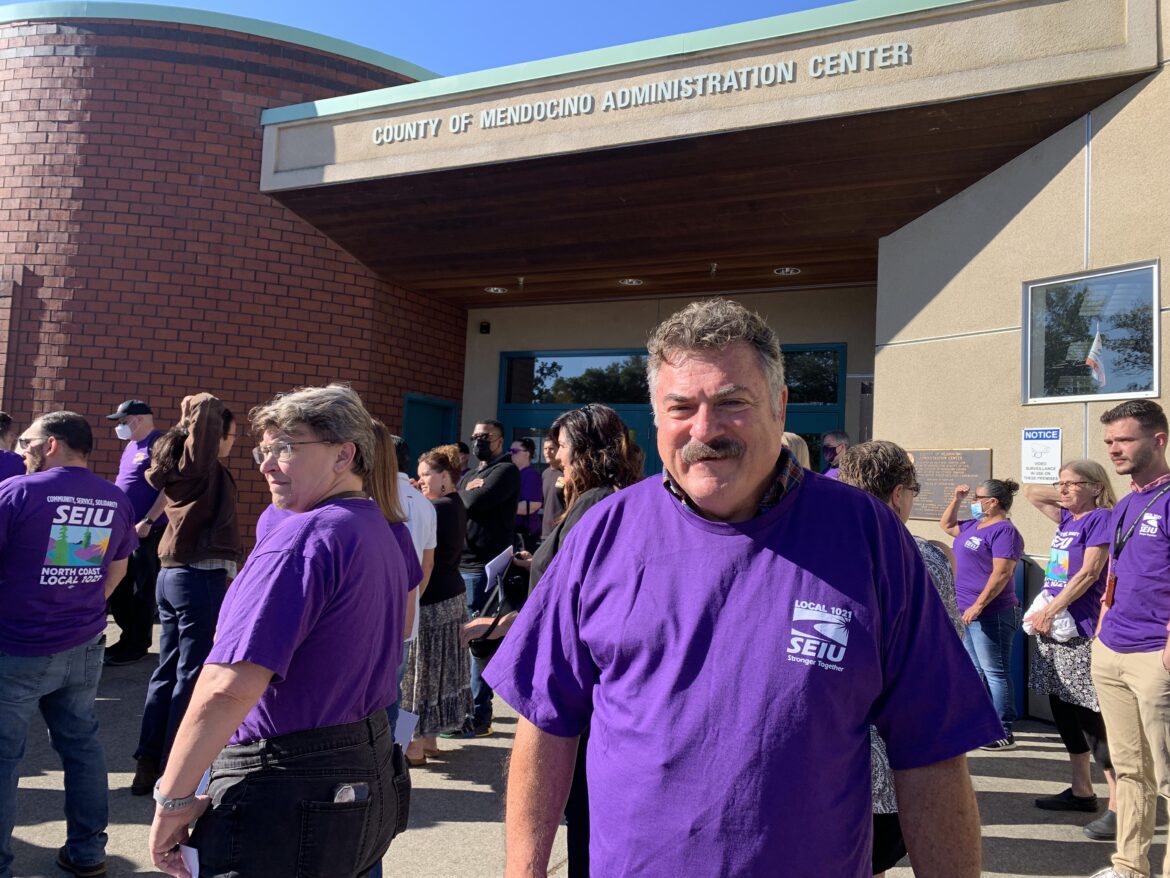 Vince Hawkins, a health inspector in Mendocino County, rallies outside the July 12 Board of Supervisors meeting with other Service Employees International Union Local 1021 members to ask the county for better wages.

UKIAH 7/13/22 — A union representing county employees in Mendocino County is asking for wage increases during the group’s negotiations for its 2022-2023 contract to offset record inflation.

The Service Employees International Union 1021, which represents 850 of the county’s 1,210 workers in offices such as the Mendocino County Superior Court and county health services, is asking the county for a 5% wage increase, said Patrick Hickey, a field representative for SEIU. The 2019 contract, which expired June 30, brought an average 20% wage increase to county positions to offset salary cuts that were never recouped after the 2009 recession, said SEIU Local 1021 President Julie Beardsley.

But Hickey said the growing cost of living in Mendocino County necessitates another raise.

“This last round of negotiations we’ve made a real effort to try to get things stabilized, get the wages closer up to market rates so that when the county does train people, we actually hang onto them and we keep the experience here,” Hickey explained.

The union compares wages of Mendocino County employees to the same positions in the cities of Ukiah and Santa Rosa, and the counties of El Dorado, Humboldt, Lake, Napa, Nevada, Sonoma, Sutter and Yolo, he added. The union’s findings, in addition to the findings of a compensation study done by Koff & Associates in 2019, found that the average Mendocino County position was 15% below market rate. In the 2019 contract negotiations, Mendocino County agreed to bring all wages up to 5-10% below market rate.

The union criticized the Koff & Associates study at the time it was released, calling it a “select compensation study” in a press release in April 2019 because it said the study was not comprehensive enough.

When contract negotiations began earlier this year, the county told SEIU negotiators that it was in a financial bind and could not afford a wage increase, Hickey said. SEIU first asked for a 7.5% increase, but lowered its proposal in response to the county’s financial situation. The county has remained firm on not raising wages during negotiations, Beardsley said. Cherie Johnson, deputy CEO of Mendocino County, declined to comment on ongoing negotiations.

SEIU proposed the county cut unfilled state-funded positions and funnel those savings towards a salary increase for already-employed workers. Hickey said the union has identified over 400 vacant positions in Mendocino, many of which are funded. Johnson confirmed that about 400 positions in the county are vacant, and said the HR department is working with each unit to determine which of those positions are funded.

The county consulted with the Board of Supervisors during a closed session Tuesday, July 12 to compile a spreadsheet of funded and unfunded vacant positions, Johnson said. The county will share the information with SEIU soon, Johnson added, information that Hickey said the union requested “weeks and weeks ago.”

Should the county not present the information, the union is considering filing charges of unfair labor practices with the California Public Employee Relations Board on the grounds that the county is not providing information the parties need in order to bargain, Hickey said.

Mendocino County and its employees are in a dire position, Hickey added. County employees are desperately needed, but with low wages and an ongoing housing crisis, employee retention is only worsening. Despite recruiting efforts, the county is seeing less job applicants than they were before the pandemic, Johnson said.

“We are attracting applicants but we’re not getting the volume that we used to,” she said.

The 20% wage increase workers received in 2019 helped Mendocino County cut down on staff turnover, Hickey said. It helped Mendocino catch up to other counties, but now the county is again falling behind as workers seek jobs elsewhere. Johnson was unable to provide the county’s turnover rate.

Vince Hawkins, an environmental health specialist in Mendocino County, said he’s trained around ten people while working in the county who have quickly left for the same position in neighboring counties to chase better benefits and pay.

“On any given day, I may be the only health inspector that can respond to complaints, inspections for food facilities, recreational water facilities, tattoo parlors, things like that,” Hawkins said. “If I walk you over right now to my cubicle, I can show you three empty desks that should be filled with health inspectors.”

Mendocino County paid its environmental health specialist $51,688 in 2020, according to county data. The same position in Sonoma County made $66,854 in 2019, the county reported.

Another problem threatening the county’s retention rate is the lack of affordable housing. People who get hired sometimes leave the job after a frustrating housing search, Hickey said. Some county employees have lived in hotels or motels for up to six months while looking for housing, he added.

Wages are the top priority for SEIU’s new contract. With inflation the highest it’s been since 1981 at 8.6% in May according to the Pew Research Center, union members see the county’s refusal to hike wages as equivalent to an 8% pay cut, Hickey said.

“With the 8.6% inflation that we’re dealing with, you know, getting a 0% increase is like getting an 8% wage cut with gas and groceries and everything and housing in this county,” Hickey said. “It is very challenging.”

Negotiations are still ongoing between SEIU and the county. SEIU is also negotiating for a childcare center for county staff and a housing program that would help employees pay for first and last months’ rent and security deposits if they relocate for a county job.

Around 70 union employees rallied at the Board of Supervisors meeting Tuesday, July 12 to bring the contract negotiations to the attention of the board. Workers piled into the board chambers at the start of the meeting holding signs that read “No C.O.L.A [cost of living adjustment] will lower retention and service rates” and “Mendo residents deserve better.”

The board heard concerns from county employees during public expression at the start of the meeting, but could not act on any issues concerning the union’s negotiations with the county during the Tuesday meeting in order to comply with Brown Act restrictions. But some supervisors considered the workers’ pleas to increase their pay while considering the funding for other projects discussed in the meeting.

“We started the morning with our employees telling us how unacceptable zero cost of living increase is and I agree with them, they’re facing eight percent inflation, and I feel embarrassed,” Chair Ted Williams said during the meeting while discussing funding for a potential ordinance to regulate private groundwater extraction. “It’s hard for me to support spending what could easily be a third of a million dollars on a project, even though I support the goal, if it means telling our employees that we can’t give them an adjustment.”

It was unclear how the ordinance would be paid for, but the board agreed to tentatively move forward and look for funding from the state instead of county funding that may take away from county employee salaries.