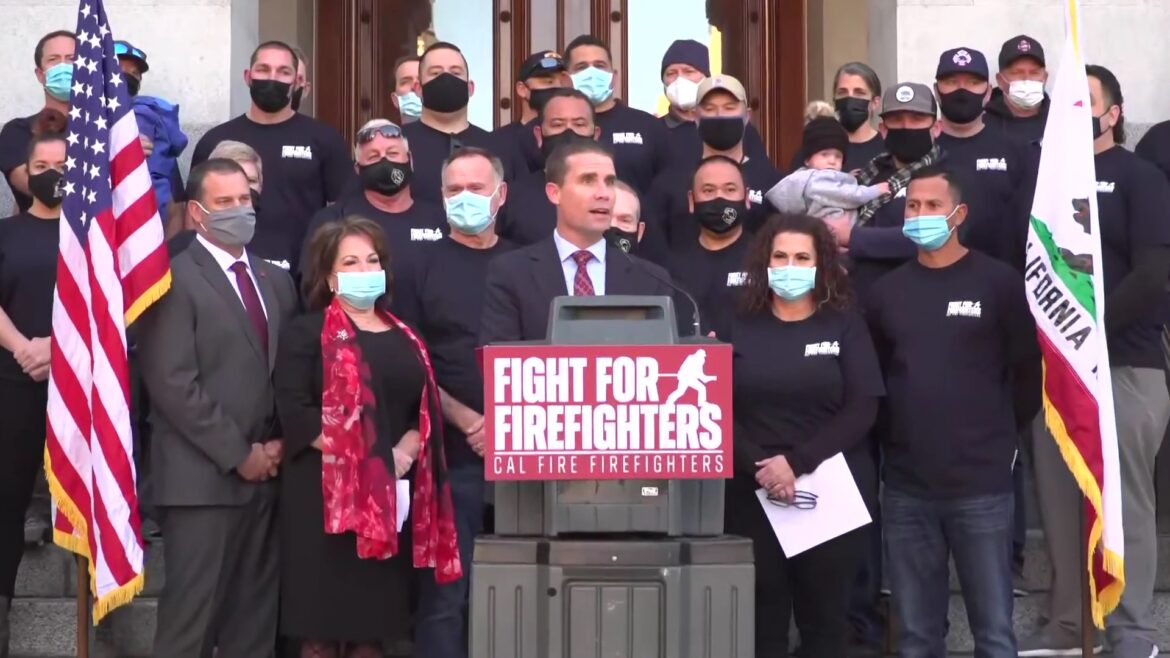 North Coast State Sen. Mike McGuire announces bi-partisan legislation to handle the CalFire shortage is going to be introduced in the coming year at a press conference in Sacramento on Friday morning.

MENDOCINO Co., 12/10/21 — Angel Hendrie is a captain with CalFire in San Diego and she’s been a firefighter for almost 30 years. Her husband has been a firefighter for 40. They’re a CalFire family, Hendrie said this morning on the north steps of the state Capitol, and they know how stressful the job can be as the two of them try to raise 15-year-old twins at the same time.

“So many times when we come back from long fire assignments, when we have been on duty for 60 plus days at a time, we are having to come right back to our fire stations and still be held on duty with no end in sight,” Hendrie said.

Hendrie said she gets by with her mother’s help, but working that many hours straight isn’t how it’s supposed to be. She ends up missing out on major events in her children’s lives as a result. “I admit that I have at least one emotional breakdown each fire season from exhaustion and missing my family,” she said, adding that she’s managing better than others. The stress entirely consumes and kills other firefighters.

“In 2017, my partner of three years at the fire station, took his own life one morning after getting off shift,” Hendrie said. “Being stuck on duty for long periods of time took a toll on his marriage and his mental health.”

Firefighters are tired. They’re overworked. Some of them are even at the breaking point. Earlier this year, North Coast State Sen. Mike McGuire successfully pushed for seasonal firefighters to get the same protection as full-time firefighters in the state. On Friday, Hendrie joined McGuire at a press conference in Sacramento to push for more hiring at a time when CalFire is desperate to get workers on board. “We need to fix the CalFire firefighter shortage for the health and safety of the men and women who stand behind us today,” McGuire said. “They are the gold standard of America’s firefighting force.”

The legislation would also call for mandatory minimums for the number of firefighters in hand crews and lead to 16 additional hand crews of 48 firefighters each being hired to round out the 1,124 total hires expected. Those crews would be expected to provide on-the-ground support during fire season, proactively move on defensible space and fire prevention projects, and protect vulnerable communities.

“We also know that more will need to be done,” McGuire said, “which is why we’re going to propose a modern-day staffing plan for CalFire. The legislation would mandate a staffing study that will ensure the agency and staffing infrastructure needs in this new reality we live in are met.” That study is expected to be delivered to the governor and legislators no later than a year after the bill is signed.

Firefighters are working long overtime hours, up to 40 days in a row without a day off, in traumatic conditions. More than 54,000 calls have been made by firefighters to state mental health hotlines. “What we know, working long overtime hours, 40 days in a row, away from their families, is leading to significant stress and mental health challenges among CalFire firefighters,” McGuire said.

Standing in front of a couple dozen firefighters, Brian Rice, president of union California Professional Firefighters, said, “If I asked a question of the men and women behind me, ‘How many of you know someone that’s committed suicide?’ Everyone one of them probably would raise their hand.”

Firefighting has become more busy and more dangerous than it was a decade ago and each fire season proves to be several times more powerful than the last, Rice said. The answer is hiring more staff, and “there’s no shortage of qualified candidates in this state,” he said. “There are young men and women waiting in line to test and become a part of this profession,” Rice said. “We just need to work together to loosen up the budget dollars so that we can protect the state of California to the best of our ability.”

One thought on “McGuire calls for immediately hiring 1,124 firefighters amid mental health crisis for exhausted workers”