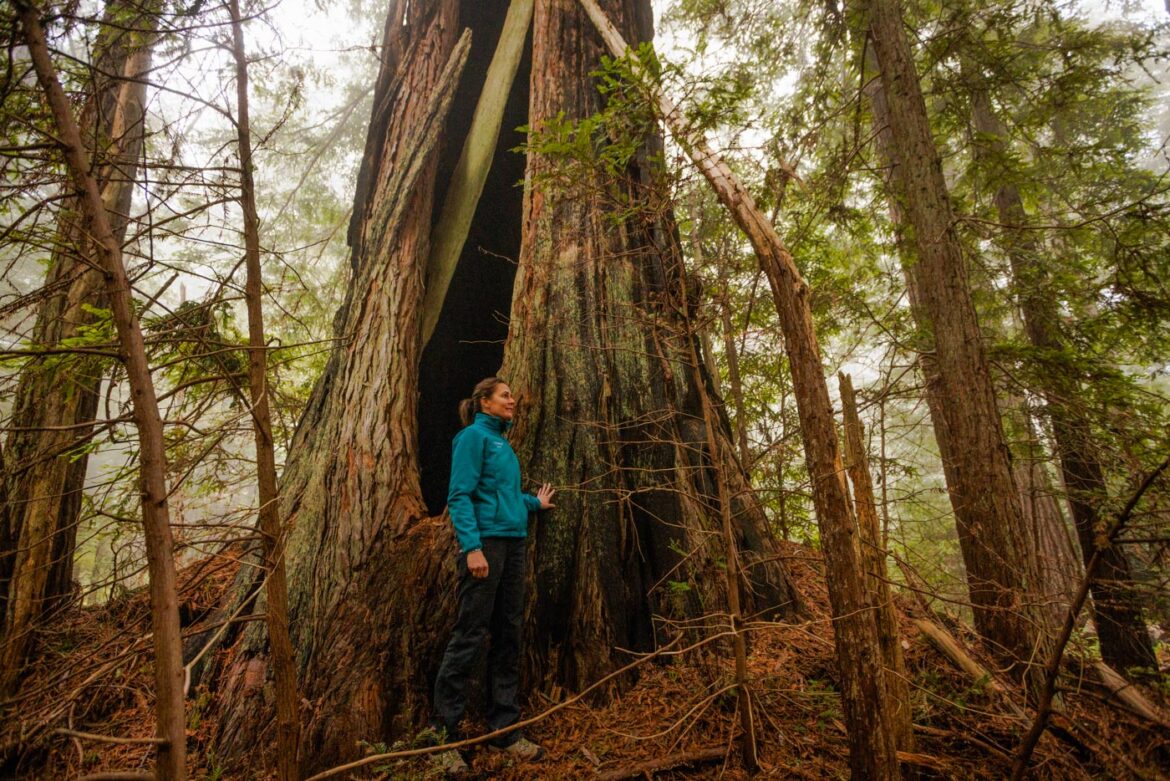 Max Whittaker/Photo courtesy of Save the Redwoods League

Save the Redwoods League's Becky Bremser tours The Lost Coast Redwoods property near Rockport on Dec. 3.

MENDOCINO Co., 12/9/21 — One of the largest stretches of unprotected coastline in the redwood region near the Usal Redwood Forest is up for sale, and conservationists want to buy the property they call the Lost Coast Redwoods. But in order to carry out their plans of restoring the industrial logging area to old growth forest, they have to raise almost $30 million before the end of this year.

Save the Redwoods League announced Thursday it had secured an agreement to buy 5 miles of undeveloped coastline in northern Mendocino County from timberland owner Soper Company, but the nonprofit will only be able to purchase the 3,181-acre property if it can raise the $36.9 million asking price by Dec. 31. The San Francisco-based nonprofit already raised $10 million of that sum as of the announcement Thursday, leaving $26.9 million to go. Yet this is such a rare opportunity that the nonprofit isn’t going to let it slip out of its fingers, Becky Bremser, the league’s director of land protection, told The Mendocino Voice.

“We’re continuing to raise funds into the new year,” Bremser said, “but our plan is also to take out loans in order to finance this. That’s a piece of the puzzle if we can’t fully raise this big chunk of money by the end of the year.”

The donations raised between now and the end of the year will go directly toward the purchase of the property. The league also plans on raising an additional $6.5 million for stewardship activities and to potentially acquire additional property that would connect the Lost Coast Redwoods property to the league’s 374.3 acre Cape Vizcaino property to the south, which was acquired in 2011. The property is already immediately adjacent to the league’s other property to the north, the 927.5 acre Shady Dell property, which was acquired in 2008. The purchase affords the nonprofit the possibility of extending the Lost Coast Trail across all three properties.

“So we’ve actually owned those properties for a pretty long time,” Bremser said, “which shows that this Lost Coast Redwoods property has just been on our radar, in our sights and a high-priority acquisition project for us for quite some time.”

The nonprofit has been working on acquiring the property quietly behind the scenes for the past couple of years, ever since its staff got wind of the fact Soper was liquidating its assets. “Now that was December 2019,” Bremser said. “And as conversations continued into early 2020, that’s when the world turned upside down and inside out.”

Soper and the league stayed in touch over the course of those two years, but there wasn’t really much movement until the past fall. The company began talking in earnest with the league and a handful of other potential buyers. “We were the successful bidders to secure the property with the hope of acquiring it before the end of the year,” Bremser said.

The nonprofit is buying the property to take it out of commercial timber production and it’s expected to be turned into a conservation area that will likely be open to the public. Bremser said it’s still too early to say when exactly that would happen. “This is all just happening so quickly,” Bremser said, “but the long-term plan for the property is to work with other partners on developing a public access plan for the purpose of connecting people to the forest and this stretch of the Lost Coast that’s been in private ownership for more than a century.”

The purchase fits into Gov. Gavin Newsom’s climate goal of conserving 30% of the state’s lands and waters by 2030. Restoring forests to old growth conditions is identified as climate-smart land management in the North Coast region in the state’s Natural and Working Lands Climate Smart Strategy Plan.

For more information or to donate, visit Lost Coast Redwoods – Save the Redwoods League.