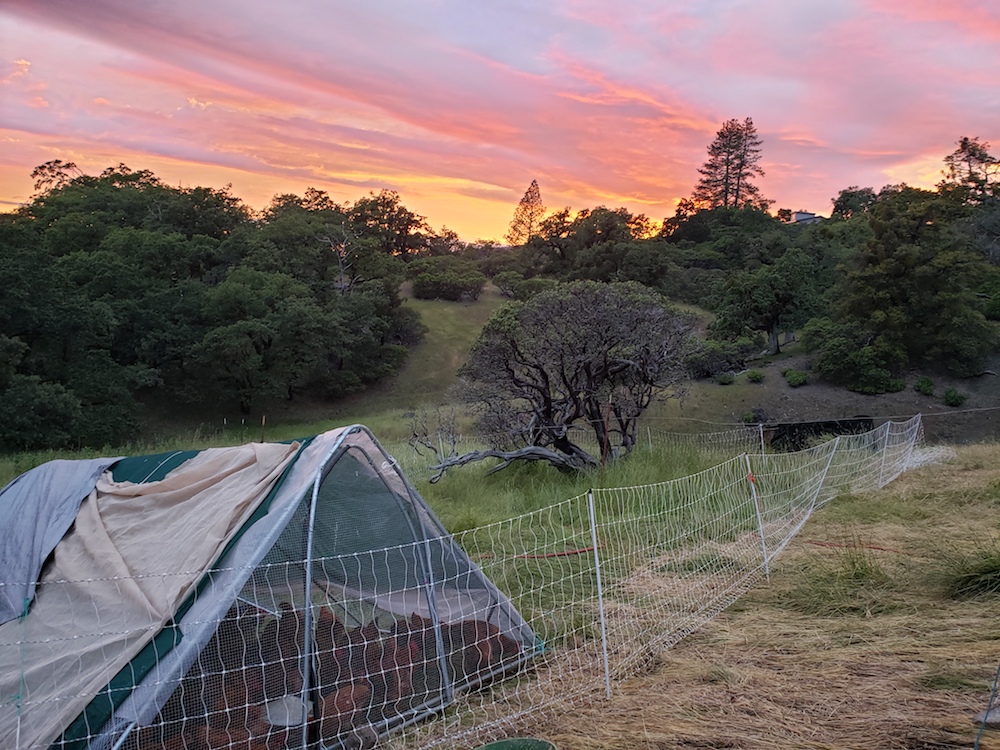 Everything is so green!  It brings such joy to the soul to walk the softened landscape, moist and squishy underfoot with green growth or forest duff.  The last few years we were still waiting for the rain as the end of November approached.  This year we’ve already had 8 weeks of strong growth and the pastures are lush and vibrant

We’ve sown two rounds of cover crop thus far.  The first seeds went in underneath squash and tomatoes in early September.  While the crops continued to produce, the cover crop germinated and began to grow.  Now, the squash plants have withered and been overtaken by the oats, peas and bell beans that are 8” tall and growing fast.

The second round of cover crop has germinated and the oats are pushing through the mulch layer.  The grasses always come first, followed by the larger seeds of the peas and beans, which take longer to get going.  It makes me happy to see the green shoots, knowing that they are sequestering carbon from the atmosphere and that their roots are providing food for soil microbes.

Something about the nature of growth brings a reflection on  beauty and joy.  I think about the difference between the parched, dry landscape of summer and the richness that the rains bring.  This has always been a Mediterranean climate that dries in the summer, but the heat and drought have become more intense with climate change.

Winter crops have been going in as fast as we can plant them now that there is ample water.  We managed to plant one succession of fall brassica with the limited water in August and September, and the first cabbages are heading up already.  Broccoli, cauliflower, romanesco and brussels sprouts are farther out yet, but kales and collards have been amply available.

Since the rains came we’ve planted out two more successions, along with several hundred purchased starts from Gloria at the farmers market.  All hoophouse beds are full except for one small one that will get kohlrabis this coming week.  The last of the summer hoophouse crops are being cycled out, sweet peppers replaced by peas and scallions, hot peppers to be cleared to make way for beets, salad mix and asian greens.

The two rows of hoophouse tomatoes are still producing more than 100 pounds of tomatoes each week, a stunning feat of endurance that has been in full production since the end of June.  We grow the Cour Di Bue (Oxheart) heirloom, which is a durable and super productive indeterminate variety.  It will produce reliably for the entire season, and with our limited frosts because of the inversion layer, we have tomatoes from July-December.

Intensive plantings in ideal conditions can have stunning results.  Two beds of tomatoes, each 50 feet in length and planted on 18” centers in the caterpillar tunnels, means about 70 tomato plants.  From these rows production has been low-end 100 pounds per week, and some weeks as much as 200-300 lbs.  Over the season we’ve harvested more than 2000 pounds of tomatoes from these rows, selling them at markets and processing the excess into sauces and salsas for sale at the farmstand.

As the summer crops come out, the focus turns again to salad mixes and quick-succession root crops like salad turnips and radishes.  The hoophouses are remarkably productive, increasing the speed of growth and the quality of the harvests by protecting from the coldest temps and sheltering the plants from the wind.

Winter crops are affected as much by the desiccating winds as anything else, although frost and battering by rain doesn’t help much either.  Unheated hoophouses with one layer of plastic are simple but effective, and the difference is super notable.  The row of cabbages in the hoophouse is twice the size of the outdoor plantings, and is two weeks closer to finishing.  Salad mixes grow uniformly and without as much of the dirt splash as happens to outdoor winter salad crops.  The leaves are also more tender because they don’t have to survive the winds or as many frosts.

As fall winds down towards winter the farm slows, marking pace with the rhythm of the season.  I tend to work outside till dusk, so these days end much earlier than the long hours at the height of summer.  There is more time for reading, for cribbage, for paperwork and planning.  I love to walk out the door with no particular task in mind, and to walk the farm finding things that need doing and getting them done.  This is one of the simple pleasures of the slower season.  As always, much love and great success to you on your journey!

Casey O’Neill owns and runs HappyDay Farms, a small vegetable and cannabis farm north of Laytonville. He is a long time cannabis policy advocate, and was born and raised in the Bell Springs area. The preceding has been an editorial column. The Mendocino Voice has not necessarily fact-checked or copyedited this work, and it should be interpreted as the words of the author, not necessarily reflecting the opinions of The Mendocino Voice.