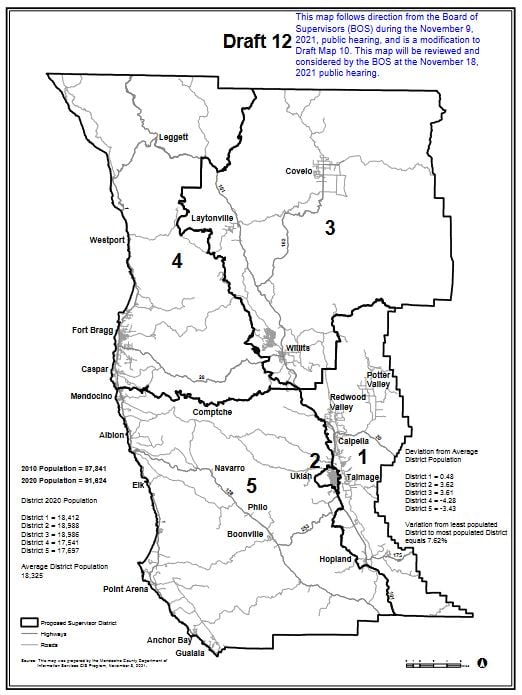 MENDOCINO Co., 11/22/21 — The Mendocino County Board of Supervisors adopted a final map revising the lines of the county’s five supervisorial districts Thursday afternoon, bringing that phase of the local redistricting process to a close barring legal challenge from parties aggrieved by the results. The all-volunteer Redistricting Advisory Commission received extensive feedback from the public, most of which came from individuals opposed to seeing district lines move across their homes or businesses. Most everybody wanted to maintain the status quo, particularly in incorporated cities like Fort Bragg and Willits as well as unincorporated towns like Covelo, but for most of the process it wasn’t clear that would be possible.

“The primary concerns that we had a lot of public input on were trying to keep the Laytonville area in the Third District, the town of Mendocino in the Fifth District and the Caspar community in the Fourth District.” said Information Services Coordinator Lief Farr, the county’s senior (Geographic Information Software) GIS mapping technician.

Those tasks were particularly challenging in the northern half of the county, where District 3 (which includes Round Valley and Willits) had grown too much and District 4 (including Fort Bragg and the North Coast) had actually decreased in population. The easiest way to even that up would have been to move Laytonville from District 4 into District 3 — but the idea met with significant push-back and at least one community meeting to organize opposition. The census-designated communities of Mendocino, Caspar and Covelo also put up enough resistance to ultimately be left alone. Rural areas with lower population density were easier targets with less aggregated political influence. For the most part, however, communities that advocated to remain intact succeeded in doing so.

Mendocino County has 94,624 residents, according to 2020 Census data, so federal law requires us to split the county into five districts with roughly 18,325 residents with a maximum variation of 10 percent and ideally less. The Redistricting Advisory Commission also sought to avoid separating “communities of interest” — or geographicaly defineable areas in which the population has shared social and economic interests. A total of 12 maps were drawn up in recent months, but that took place on a compressed timeline due to the late release of the 2020 Decennial Census as a result of the COVID-19 pandemic and legal challenges.

“I’d like to thank the commission for their work on this,” said Third District Supervisor John Haschak. “With all the iterations of the maps it shows the people were listened to, and the board is accepting the work that the commission did. I really appreciate that.”

Fifth District Supervisor Ted Williams made the motion to accept Map No. 12, which was seconded my Second District Supervisor Maureen Mulheren and approved unanimously. Now that the map has been finalized, there are two more steps involved in the process. During a Board of Supervisor’s meeting on Dec. 7, the board is expected to introduce an ordinance finalizing the new district boundaries. A second reading of the ordinance is scheduled for Dec. 14, though that step is largely a formality.