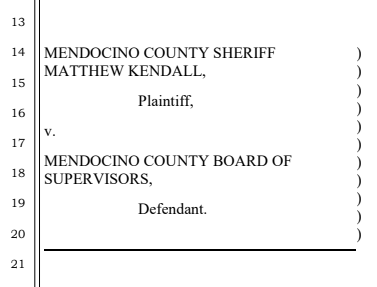 MENDOCINO Co., 8/18/21 – It is vital for the safety of informants and the integrity of criminal investigations for the Mendocino County Sheriff’s Office to maintain its own independent information technology (IT) department, rather than sharing IT services with the rest of the county government, because IT workers who have not been adequately vetted could end up accessing sensitive investigative information and intelligence from federal partner agencies, according to an argument laid out in court documents filed by the sheriff July 30.

The conflict developed over a budget dispute in which the MCSO requested funding for its own independent IT staff and didn’t get it. The Board of Supervisors instead opted to absorb the MCSO’s IT operation into one unified department (in accordance with a long term plan to modernize the county’s information technology infrastructure as previously reported in a Civil Grand Jury report released last month) and passed a budget that reflected that decision. Kendall decided to keep his IT staff anyway, raising the question of whether the sheriff has legal authority to spend money on staffing that isn’t in his budget — and whether the board will actually enforce an obscure provision allowing the county to hold department heads personally financially liable for overspending.

Anticipating litigation, and believing County Counsel Christian Curtis could not adequately represent the county and the sheriff’s office in his lawsuit against the county, Kendall asked the board to allocate $50,000 for outside counsel from the Law Offices of Duncan James. The board raised objections, however, citing an ongoing wrongful termination lawsuit alleging discrimination against former Agricultural Commissioner Harinder Grewel in which James is representing the plaintiff. Curtis raised strategic concerns about hiring an attorney “who is actively suing us” to represent a current department head in litigation.

“I deserve to have someone I trust,” Kendall told the Board of Supervisors during a Zoom meeting Aug. 3. “Not someone from San Francisco.”

The board agreed, broadly speaking, that Kendall should have an attorney to represent him in this matter — and that it should be someone he trusts — but insisted that it not be Duncan James. Kendall has taken the matter to court in a series of ex parte hearings with Ann Moorman, presiding judge of the Mendocino County Superior Court, maintaining that the most qualified lawyer to represent him is Duncan James – not just because of his firm’s experience both serving and suing Mendocino County – but also because the two men are “old friends” who have known each other for most of the sheriff’s life.

Kendall has also argued in court filings that since James has served as Mendocino County District Attorney and county counsel (he held both jobs simultaneously from 1969 to 1976), and subsequently has since gone to court both for and against government entities in several cases as a private attorney, “no one is more experienced at representing Mendocino County.”

It’s a good thing to have old friends you can trust – but whether that friendship is a good basis on which to award no-bid government contracts for $50,000 is a matter for Judge Moorman to decide. She’s scheduled an ex parte hearing at 3 p.m. tomorrow to review Kendall’s request for appointment of outside counsel. Minutes from a similar hearing July 30 indicate that before such an appointment can be made the parties will have to establish a conflict of interest preventing County Counsel Christian Curtis from representing Kendall in-house.

While Kendall and Curtis concur on that point, the Board of Supervisors has yet to agree. They debated the specifics of Kendall’s argument at length and found for the most part that no conflict exists. They did, however, invite Kendall to come back to the negotiating table and work toward an agreement reached out of court without the need for costly litigation.

Wednesday afternoon, the county filed an update with the court indicating that $1,386,110 have been allocated from a $22 million disaster settlement from Pacific Gas and Electric to address Kendall’s concerns about next year’s budget. They also report that the MCSO has exceeded its budget 10 times in the last 12 years, and each time the county has covered that expense without recuperating it from the personal finances of the sheriff — apparently seeking to ease Kendall’s concerns about having to pay for those staffing expenses out of pocket. Finally, they’re still working on the language of the board’s position statement on the question of whether a conflict of interest exists. That could be an obstacle to resolving the case, as Moorman indicated in a previous hearing July 30 that a conflict of interest should be established for the rest of the process to go forward.

If Moorman finds that a conflict exists, Government Code 30001.6 states the judge can appoint outside counsel, either the Law Offices of Duncan James as requested by the plaintiff or a firm selected by the Board of Directors — which in this case would be Manning & Kass, Ellrod, Ramirez, Trester LLP. Either way, outside counsel will represent the sheriff in his pursuit of a court order to settle this budgetary dispute over the control of the sheriff’s IT department. It’s also possible, however, that Moorman could direct the parties to resolve the matter out of court — or decline to make a ruling on the legal questions the sheriff has raised.

7.31.21 – Declaration of Duncan James in Support of Motion