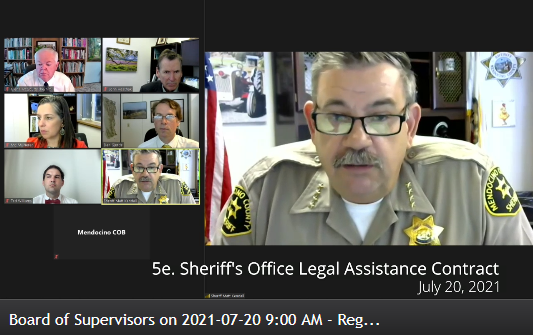 MENDOCINO Co., 8/1/21 — Mendocino County Sheriff Matt Kendall would like to speak to an attorney, and the Board of Supervisors is working on hiring one for him, but disagreements have arisen over who — and that matter will be on the agenda Tuesday morning during the supervisors’ regularly scheduled meeting.

During the last supervisors’ meeting on July 20, Kendall asked the county to allocate $50,000 for outside legal services to represent him in a conflict with the county over whether his office will be able to maintain an independent Information Technology (IT) department, or whether the sheriff’s office will share a unified IT department with the rest of the county government.

The sheriff has expressed his preference for the services of attorney Duncan James, but state law does not necessarily allow Kendall to dictate which attorney gets the contract. Kendall argued that allowing the county to choose which attorney represents the sheriff’s office in a case against the county would effectively rig the legal battle in the county’s favor — implying that the county is opposed to hiring James because James might win.

“County Counsel Curtis advised me he’s opposed to hiring Duncan for several reasons,” Kendall told the supervisors via Zoom. “Mostly he cited cases which his law firm had won, and from my point of view or perspective I’m not seeing the downside the downside with that.”

Curtis framed his objections around criticism of James’ past performance representing the Ukiah Valley Sanitation District in a long and costly litigation process against the City of Ukiah, saying there were some “red flags” there. That battle was the subject of a 2019 Civil Grand Jury investigation and report subtitled “Change and Transparency Needed.” There’s also the matter of Grewel vs. Mendocino County, in which former Agriculture Commissioner Harinder Grewel is suing the county for wrongful termination and James is representing him.

“There are certain strategic reasons I would generally recommend against using a firm that’s actively suing us,” Curtis said.

Rather than grant Kendall’s request as written, the supervisors voted unanimously to have county staff shop out proposals from other law firms. Four such proposals have been included in Tuesday’s agenda, including missives from: Aaronson Dickerson Cohn & Lanzone in San Carlos, Porter Scott in Sacramento, Cole Huber in Roseville, and Manning & Kass, Ellrod, Ramirez, Trester LLP which has offices in San Francisco. Attorney Duncan James is conspicuously absent from that list.

When a conflict like this arises, Government Code 30001.6 dictates that Kendall can request a hearing before the Hon. Ann C. Moorman, presiding judge of the Mendocino County Superior Court. If Moorman determines that Kendall cannot be adequately represented in-house, she can appoint an outside attorney to represent him. Kendall is permitted to recommend the lawyer or law firm of his choice, but so is the county — and Moorman gets to choose.

The matter was presented in an ex-parte hearing Friday afternoon. The full details of that proceeding are paywalled on the Mendocino County Superior Court’s website but available portions of the documents indicate that Kendall was represented by James and his associate, Douglas Losak, who have filed documents on the plaintiff’s behalf asking that the court appoint them as outside counsel. County counsel has filed a declaration in opposition to that request.

Meanwhile, Duncan James appears to be a qualified attorney, having served as both the Mendocino County District Attorney and as county counsel simultaneously from 1969 to 1976. He also argued a case before the United States. Supreme Court, according to his website. James’ areas of practice listed at www.ukiahattorney.net include personal injury, insurance, real estate, construction and business law. Intergovernmental conflict is not explicitly advertised as an area of James’ expertise, though his firm does seem to have experience with them.

Manning & Kass, Ellrod, Ramirez, Trester LLP, on the other hand, has submitted a 24-page proposal highlighting the experience of their “governmental entity liability” team in representing public entities and law enforcement agencies — which appears to be a specialty for some attorneys.

County staff have advised the Board of Supervisors to select an attorney for Sheriff Kendall during their regularly scheduled meeting at 9 a.m. Tuesday, Aug. 3. Other items on the agenda include an update on the drought, the COVID-19 pandemic, and a rough outline of one-time spending priorities for disaster settlement money from Pacific Gas and Electric. The full supervisors’ agenda can be found here.

5 thoughts on “Sheriff Kendall lawyers up”