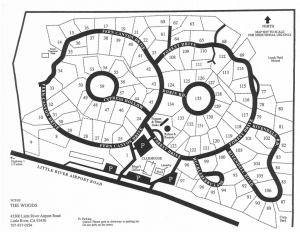 The map of The Woods in Little River, provided by Sequoia Living, shows the large lots the manufactured homes exist on.

In mid-March, the residents suddenly found out their secluded tract was for sale and could be sold to investors or speculators who might dramatically raise rents.

Located in the midst of a unique mix of towering pine, fir and redwood groves and pygmy forest swaths along Little River Airport Road, it is quite appropriately named The Woods. Across from the 109-unit 55+ senior living park is the Coast’s airport. The community of Little River is isolated in the great forest and perhaps lesser known outside the Coast than communities like Westport and Albion. But Little River is also home to a golf course, historic cemetery, restaurants, grocery store and the Little River Inn, which dates back to 1853.

Now, Resident Owned Communities, (ROC-USA), a nationally active non-profit organization from New Hampshire, is actively working with the residents to help them buy The Woods. ROC-USA is teamed with California Cooperative Community Development (CCCD), which brings state affordable housing funding to the table. If successful this would be the first time ROC-USA has managed to pull off a deal in California. Nationally, ROC-USA has helped 270 mobile home communities buy their own parks, said Mike Bullard, spokesman for ROC-USA. Bullard says that ROC-USA has a strong record of helping to arrange financing for residents to buy their own park and keep rents down. Rents drop to market rate or below within five years when ROC-USA helps, said Bullard.

“This is done by taking the profit margin out of the equation,” Bullard said.

Residents would become owners not only of their own homes but also members of a non-profit that owns the park real estate, its water and electric systems and much more. When they move, they can sell their homes, along with their membership in the community. Homeowners who don’t join can simply pay rents to the cooperative.

“Not one has failed or reverted back to private ownership. There are very few downsides to the cooperative ownership model. One of the biggest upsides is that — residents live their lives with the nagging fear that they are going to come home one day and find their park has been sold and they might have to move or pay much higher rent — that fear is gone once they become the owners,” Bullard said.

The increasing interest of predatory real estate investment groups in buying mobile home parks and raising rents has been a growing problem statewide, financial publications and real estate financiers report. Some counties, including Sonoma and Humboldt, have enacted mobile home park rent stabilization ordinances. Humboldt County created a rent stabilization ordinance through an initiative process and a popular vote in 2016. Mendocino County does not have such an ordinance, although the city of Ukiah does.

The Woods, an isolated and sleepy retirement get away on 37 acres, run first by its founder and then a Presbyterian non-profit, is now on the open real estate market and expected to be sold in early May.

That real estate market features investors flush with cash from the recent rises of Wall Street and savings that increased dramatically during the pandemic. The Woods’ residents have created their own cooperative non-profit in an effort to buy the park they call home and stave off new owners who might raise space rents, which now top out just below $1000 per month.

Sequoia Living, a non-profit organization that also owns half a dozen other senior living and affordable housing operations in the Bay Area, told residents on March 11 that The Woods were to be put up for sale in the last two weeks of April, then taken off the market on May 7. While moving to sell The Woods, Sequoia Living has been in the process of opening a new full service senior living facility in Walnut Creek. Sequoia Living did not respond to calls seeking comment. Residents in Little River quickly decided they needed to put in their own bid for The Woods and went to work.

Retired architect Jim Kachik, 75, who has lived at The Woods full time for six years, is president of the interim board of The Woods Cooperative Association. Investment publications report that offices and strip malls took a dip during the pandemic due to uncertainty about retail businesses, while mobile home parks provided a steady return.

It’s unlikely that anyone who drove into The Woods for the first time would think it was a mobile home park. There are no “mobile” homes in the park. Each home is a manufactured home brought in on wheels, then made permanent. Community residents pay $82 monthly in sewer fees. The Woods Small Water Association annual dues of  $4 is billed in April. A master tank provides propane for heating which is piped underground to each home and individually metered.

Time may be short for the old version of The Woods, with an answer expected on who will own the property sometime after May 7. Oddly, Sequoia Living told residents The Woods would be sold after a three week period of being on the market, which is not the usual practice in real estate.

The Woods residents pay space rents that range from $682 to $956 per month, a brochure provided by Sequoia Living said. They are afraid rents will go up more than they can afford with new owners. Currently, the rents are increased annually based on the Consumer Price Index.

Sequoia Living owns the land and sets the rules and rents, all of which the cooperative would handle if residents are successful in their effort. Homes at the Woods sell quickly with local Realtors or private sales. There was one home recently listed for sale at $249,000. The homes come with lots much larger than in a typical mobile home park, more like city lots and each lot has a unique look.

The Woods was founded by Paul Tay, an architect who came to the Coast from Southern California and practiced here until recently. Tay, 97, still resides on the Coast but didn’t want to comment on the sale when contacted by The Mendocino Voice. Tay opened the park in 1973 and sold it to Sequoia Living in 1993, documents from Sequoia Living state.

There was a residents’ council in existence at The Woods when the need for a formal board of directors to run the new co-op came to light. Kachik and other members of that council, including Harvey Chess, Sheila Klopper and Barbara Cohen, became part of the Interim Board of Directors the Co-op, which has quickly created a nonprofit legal structure to participate as a cooperative in the bidding process for the entire facility.

“We cobbled together this official structure. We have papers in to the Secretary of State for the co-op like you do when you set up a business. …We find ourselves sort of driving down the road putting the wheels on the car as we go,” said Kachik.

ROC-USA/CCCD contacted Kachik with an offer to help immediately after the sale was announced to residents. ROC-USA has reportedly been interested in The Woods and has reportedly reached out to Sequoia Living for several years. Residents responded quickly to join the co-op.

“We have 109 households and somewhere in the range of 80 of those have decided to join the co-op. Those that haven’t joined can do so any time they like. If a homeowner decides not to join and residents do prevail in purchasing The Woods, they can simply continue to do what they have been doing and rent,” said Kachik. So far the buy in fee for the co-op has been just $10. Bullard says the buy-in is generally about $100 for parks ROC has helped become resident owned.

Kachik said the game changed dramatically when he was contacted by ROC-USA-CCCD.

“They said ‘we want to help you become a co-op. We provide templates for legal documents and incorporation and all the other things that have to happen in this process,’” Kachik remembered in an April 20 telephone interview with the Mendocino Voice.

“If the community is successful in becoming a co-op. ROC will sign a contract with us. The contract includes a forgivable loan for upfront costs, such as incorporation, lawyer fees, the cost of an inspection specialist and that kind of thing,” Kachik said.

“ROC USA’s help also includes a long term financing arrangement, which they put together based on the revenue stream. The only revenue we have is the rents. So basically they connect us with the financing for the purchase by the residents,” Kachik said.

Sequoia Living was founded in 1958 as Northern California Presbyterian Homes and Services, and according to its website owns senior living facilities around the Bay Area and also The Woods, located far from the others.

“We live here in The Woods and love it. Most of us want to stay here until we go out the door in a box,” Kachik said.

He said allowing people to stay in their homes by keeping the rents down is a top priority if the current effort succeeds.

Private buyers caused controversy when the Wagon Wheel and Valley Oak mobile home parks in the Willits/inland area a few years ago.

The Woods once had The Lodge at the Woods to provide assisted living. The Lodge, which had room for 24 people, was closed in 2014 when Sequoia Living determined it was not financially feasible to continue to operate. The Lodge could become apartments to help finance the deal or play another role, Kachik said.