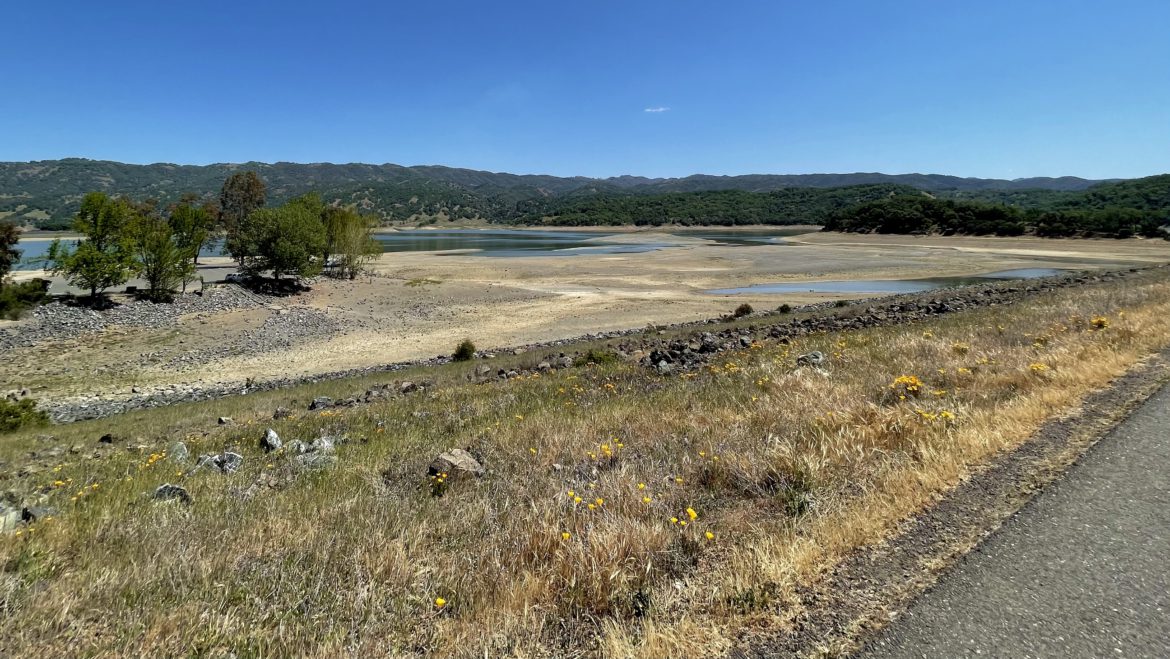 MENDOCINO Co., 5/12/21 — Reps. Jared Huffman and Mike Thompson, along with prominent North Coast water managers and politicians gathered at a virtual summit yesterday morning to discuss the severe drought facing the North Coast and the entire state. At the summit (a recording of which is available on YouTube), State Senator Mike McGuire stated that the state legislature is moving forward on a several billion dollar drought relief package, which would include $1 billion in grants to help ratepayers and utilities pay off back bills and $500 million to help smaller low income communities develop enhanced drinking water supplies, among other things (read the full list below). Huffman also said that he is optimistic that studies on raising the Coyote Valley Dam will move forward — and that the cost-benefit rubric previously used to assess such projects has changed.

During Monday’s summit, Russian River watershed stakeholders from Sonoma and Mendocino made a variety of appeals for funding to try to ensure water supply through the summer. Their requests ranged from very vague, such as money for water infrastructure, to very specific, such as funds for lining offstream water storage ponds. Although Huffman didn’t specifically respond to any of the stakeholders’ requests for financial assistance, he indicated that he would try to get money into the hands of North Coast communities that need it.

“We need to have a clear sense of the critical needs that we’re gonna face and do our best to try and connect those needs with resources at the local, state, and federal level to help folks get through what is going to be a tough, tough summer,” he said, before opening up the meeting to panelists from Mendocino and Sonoma who have vested interests in the Russian River watershed.

The drought situation is severe. Back-to-back years of low precipitation have left rivers parched, aquifers depleted, and wells coughing up dust in California. Both Ukiah and Fort Bragg got less rain over the past two years than they did during prior periods of sever drought, including from 2013 to 2015 and from 1975 to 1977.

On Monday, Governor Gavin Newsom expanded his drought emergency declaration, which previously just included Menodcino and Sonoma counties, to incorporate 39 additional counties, which according to reporting by the LA Times, together make up 30% of the state’s population.

“In the last few weeks, we’ve lost roughly 500,000 acre feet of runoff compared to what we had anticipated, which put into language that I hope people can understand, is the equivalent of 1 million households receiving water for a year,” Newsom said at his emergency declaration announcement in Merced County.

North Coast leaders made clear that in order to withstand this dire situation they will need funding from the state and federal level.

“We will need everyone here to play an active role in the drought emergency we are facing,” said Mendocino’s District 1 Supervisor Glenn McGourty, in a not so subtle reminder that as a small rural county, Mendocino needs help from the big players. “Locally, we do not have the tax base or the capacity to accomplish everything. These partnerships between different levels of government are going to be absolutely essential.”

Grant Davis, manager for Sonoma Water, stressed that an official presidential emergency declaration, which could help funnel money towards the region, could be hugely beneficial — noting that the entire Russian River watershed is in a severe drought and that making it through the summer will require collaboration.

“When we’re looking at innovative projects that are going to recharge groundwater and aquifer storage and recharge projects, there may be help from a presidential declaration,” he said.

And Beth Salomone, the general manager of the Russian River Flood Control and Water Conservation Improvement District also called for funding, more specifically to fund staff to head up a public outreach program to explain why people need to conserve and how to do it effectively. This type of public relations program may be typical in larger, urban entities but is sorely lacking in Mendocino. She also called for help in permit streamlining for offstream storage, recharge, and other projects, so that the district is prepared to store water when it comes, whenever that may be.

“We need to get these projects off the ground now to capture excess water as soon as it is available,” said Salomone.

But Salomone was clearly also thinking about how to increase water security in Mendocino long-term.

“There is a disparity in the upper Russian River regarding water rights and the strength of water portfolios,” said Salomone, possibly referencing the City of Ukiah, which has a robust and reliable water supply, compared to the surrounding communities. “Some communities have been able to strengthen their water resiliency and that’s fantastic, others still need support and help doing that. I believe anyone that is receiving any surface water from the river needs to be asking their customers to reduce, even if they have a fairly robust portfolio.”

The City of Ukiah, which has pre-1914 water rights, a large aquifer, and a very successful water recycling program, stands in vast contrast to the greater Ukiah Valley area which surrounds it. The Redwood Valley Water District, for example, cut off over 200 agricultural connections last month and anticipates that their water users will have to thin out their intake to around 55 gallons per person this summer.

At a later point, McGourty echoed that sentiment saying that we need to find an effective way to wholesale water from the City of Ukiah to surrounding districts.

On the issue of Coyote Valley Dam, an earthen dam that blocks the Russian to create Lake Mendocino, Huffman was sanguine if circumspect. In response to a question from Devon Jones of the Mendocino Farm Bureau, about raising the dam, a move that could significantly increase the year-to-year water storage capacity of Lake Mendocino, Huffman said that the issue had been studied for years, but that the studies had be conducted under a very narrow cost-benfit rubric, and that a new perspective might make the the substantive expenditures appear more viable:

“We did succeed in reviving this study and I think there is reason for optimism that we can look more broadly at the benefit side of that cost-benefit analysis. Because, in the case of this reservoir, not only do you have a situation where, in an average year, it would have 40 feet more storage than it did for the governor’s press conference — but we have water quality impairments that bring in endangered species impacts…and opportunities as we address those to bring benefits to this project that might not have been captured by a narrow application of the [Army] Corps’s traditional cost benefit-analysis.”

A representative from the Army Corps of Engineers, which manages Lake Mendocino, said that it would be a “reasonably straightforward process” to get the dam study back into a budget.

Sonoma County, which, along with Mendocino, was the first county in the state where Newsom declared a drought emergency, is also seeing cuts. Healdsburg and Cloverdale have already instituted mandatory water rationing and Sonoma Water manager Grant Davis said that the agency plans on asking the Sonoma County Board of Supervisors to approve a 20% reduction in pumping from the Russian River for the rest of the year, which would stretch out rapidly shrinking water supplies in reservoirs but also require that Sonoma and Marin water users cut back on usage.

Here is the list of funds from the bill mentioned by McGuire: