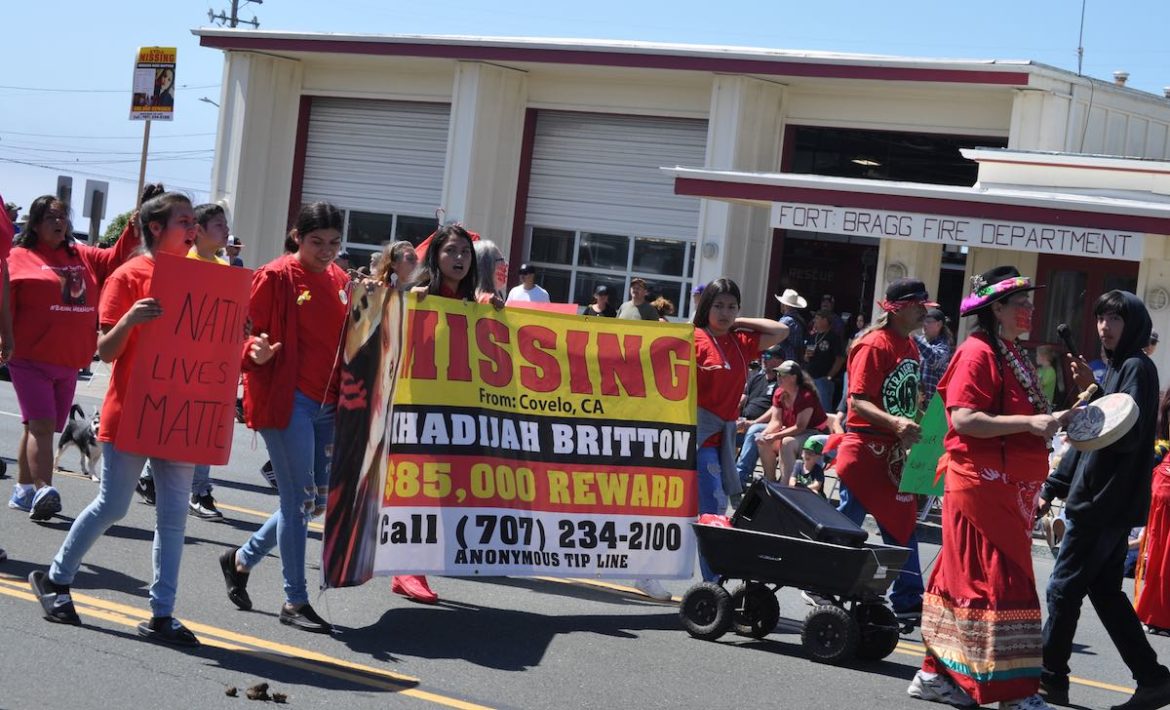 With a drumbeat and chants of "no more missing sisters," a large contingent of Native American women, mostly from the Covelo area, continued to press for action and answers on the 2018 disappearance of 23-year-old Khadijah Britton.

MENDOCINO Co., 2/3/21 — Khadijih Britton was last seen being forced into her ex-boyfriend’s vehicle in Covelo no February 7, 2018, and since then, no one has been arrested or charged in her disappearance, even with a significant reward available, and her story has attracted national concern.

This Friday, on the weekend when family and friends of the missing Covelo woman had planned vigils to commemorate her disappearance, Mendocino County Sheriff Matt Kendall, and the Federal Bureau of Investigation will be holding a live-streamed press conference to provide an update on the investigation.

The event will take place at 11:30 a.m and be broadcast via the Mendocino County Sheriff’s Office Facebook page. A vigil has been planned by family and friends of Khadijah to be held at the Mendocino County Sheriff’s Office building on Low Gap Road in Ukiah at 3 p.m. on Sunday, February 7, the anniversary of the day she was last seen in 2018. Britton was 23 years old at that time.

Britton’s family and friends have worked for years to highlight that her case remains unsolved, and have spoken about her disappearance at events around the country. Britton’s disappearance has also led to greater public awareness of the Missing and Murdered Indigenous Women’s movement, the larger ongoing disparity in unsolved disappearances and homocides of Indigenous people across the country, as well as here in Mendocino County and on the North Coast. Friends and family have also spoken out about other unsolved missing persons cases and the need to reduce domestic violence in the region.

The announcement from MCSO is below.

Synopsis:
Mendocino County Sheriff Matthew Kendall, in corroboration with the Federal Bureau of Investigation (FBI), will be hosting a “Facebook Live” announcement on Friday February 5, 2021 at 11:30 A.M.

This virtual event is being held regarding the disappearance of Khadijah Britton of the Round Valley Indian Tribes. Khadijah disappeared 3 years ago in Covelo, CA and the investigation remains active and unsolved. Sheriff Matthew Kendall and Scott Schelble, Assistant Special Agent in Charge of Violent Crime in the San Francisco Division of the FBI, will be present during this virtual livestream event.

Updates to the status of this ongoing investigation will be provided during this live event, hoping to encourage a renewed effort to seek information from the public about this case.

As time permits during this virtual event, the Sheriff’s Office intends on answering questions from the Facebook livestream chat.

This event is being held in a virtual format to comply with current COVID-19 regulations, local public health orders, and social distancing protocols. Due to these circumstances, members from the public and press will not be able to attend this event in person.

Members of the media can contact the Mendocino County Sheriff’s Office Public Information Officers if they have inquiries that are not addressed during the virtual Facebook livestream announcement.