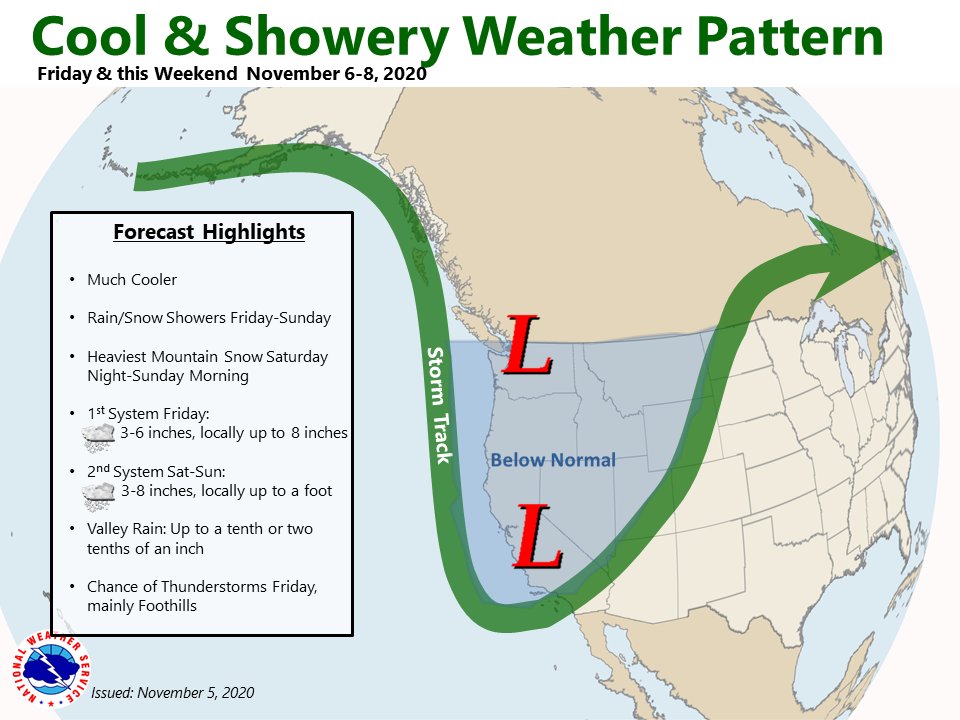 WILLITS, 11/5/20 — If you like it’s been a long dry season, you’re senses aren’t lying to you. It has indeed been dry — in many parts of California this has been the direst autumn since records started being kept in the mid-19th century. Many parts of Northern California saw no rain at all for the months of September and October.

However, it finally appears that the patterns are shifting, and a couple storm systems are bringing enough cold and rain to put an end to fire season. A fine rain is expected today, with a bit more on Sunday. A sudden drop in temperature is also expected this weekend, and temps in the mid-20s are forecast for inland Mendocino County. Last night saw a light dusting of snow at Mendocino Pass, perhaps the first of the seeason.

Swells and high surf are also expected beginning today, and continuing through the weekend, and a high surf advisory has been issued.

Then after a dry, cold start to the week, more rain later next week. By mid-November forecasts show a very good chance of a solid week of rain. Some light snow is also expected in the mountains to the north and in the Sierra Nevada.

As meteorologist Daniel Swain said on his Weather West blog (the best California weather blog around), “There is more good news. Right now, multi-model ensembles are pretty strongly suggesting at least a 1 week period of more widespread precipitation across most or all of California by mid-November.”

But the dry-season did not relinquish its grip on California easily. Yesterday saw record daily high temperatures across NorCal, with many locations in the Bay Area experiencing temps 15 degrees above normal, once more, capping off a year of records in the Golden State: driest February, direst Sept., direst Oct., hottest August on record, hottest September recorded, hottest October. In August, Death Valley saw the hottest temperature ever reliability recorded anywhere on earth.

Indeed, 2020 seemed to be the year that climate change became unavoidable in California, and the fire season was also, bleakly, intensely record-breaking with well over 4 million acres burned and the first 1 million acre fire in modern history.

Looking father into the future, Swain reports that a very strong La Niña event is shaping up. While El Niños see above average temperature water in the tropical Pacific, and bring wet winters to California, La Niñas are a cooler water pattern in the tropical Pacific and bring dry winters to the lower two-thirds of California. La Niñas can bring wetter weather to the Pacific Northwest, and the dividing line between this wetter-than-average pattern, and drier-than-average pattern, is generally at about Mendocino County.

That means that the outlook for Mendocino, for this winter, is looking somewhat drier than average, and substantially direr the farther south you go.

Says Swain: “Right now, seasonal predictions continue to point to a substantially elevated risk of a dryer-than-average winter to come, especially across the southern 2/3 of CA and largely on account of this strong La Niña event…”

If you are heading over the mountain passes of Trinity County, or out to the Sierra look out for snow and difficult road conditions.

One thought on “Rain, coming to a sky near you — finally”