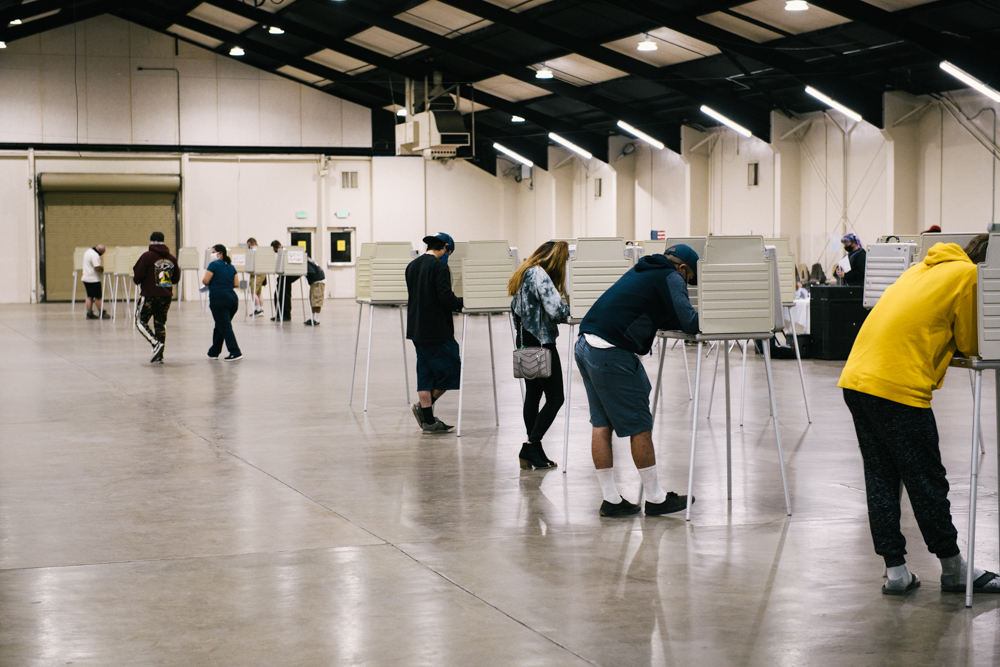 People vote at Carl Purdy Hall in Ukiah, Calif. on November 3, 2020. Election workers at the polling station said they noticed a lot of young people showing up to register to vote today, that there were overall less people who voted this year than in 2016 and 2018, and that people overall were more suspicious of the voting process than in years past. (Alexandra Hootnick for the Mendocino Voice)

LITTLE RIVER 10/4/2020 — Supervisor election results for District 1 and District 2 aren’t yet final, but Mendocino’s local elections are nothing like the razor thin national one. At this point, Maureen Mulheren, candidate for District 2, has a substantial lead over her opponent Mari Rodin, and in District 1, Glen McGourty has a considerable advantage over Jon Kennedy. It is almost certain that McGourty and Mulheren will be joining the Mendocino County Board of Supervisors.

We called up the candidates to see what they had to say the day after the election.

“We still have more votes to go but the trend certainly makes it look like I’m going to win,” McGourty said over the phone early this afternoon. As of Friday evening McGourty has 60.49% of the votes, or 2,372. That’s with about 52% of the votes counted — so while technically Kennedy could make a come back, it’s exceedingly unlikely.

For Mulheren, things are even more sure than they are for McGourty.

In a concession Facebook post from earlier today, Mulheren’s opponent Rodin wrote, “Mendocino County: You have powered our campaign for 11 months, and while this is not the result we’d worked for. I’m none the less honored your support and your belief that together we can make Mendocino County and the 2nd District better.”

Both McGourty and Mulheren are ready to jump into their roles as supervisors for District 1 and 2, respectively.

McGourty will be taking over the District 1 supervisor seat from Carre Brown, who had been supervisor for over a decade, and did not run for reelection.

“I’m feeling tired. It’s been a long race, but I feel good,” McGourty said on the phone.

McGourty hopes to keep Measure B moving along, continue Carre Brown’s work regarding water resources, and improve communications about COVID, especially to the Spanish-speaking community in District 1.

“For Spanish-speaking people, there have a lot of challenges getting good information. I want to be sure they’re being heard and participating in all of our health responses,” he said. In order to get this done, McGourty plans to speak with the county health officer, Dr. Andy Coren, and work with him to make sure all important information about COVID is available to both Spanish and English speakers. “We are so dependent on members of the Latino community, so it’s important I help provide resources to keep everyone safe.”

McGourty also wants to protect the whole county by encouraging people to follow pandemic prevention rules of masks and social distancing. “It seems to be a fairly simple and effective stop COVID from spreading,” he said. “I’m looking forward to the day we have vaccines, I think that’s probably around the corner maybe in the next six months. Getting them to the people who need them right away, such as the people that are really on the front lines, people that are doctors or nurses, that’s one thing I want to prioritize,” he continued.”

He also noted that he would like to see an emphasis on fire prevention in addition to being ready to put fires out. “I want to see the county go after creating more fuel breaks.”

One other thing that McGourty mentioned was that he is very worried about water security, considering the drought California has been facing on and off for years. He hopes to improve water security on a large scale, and for people who depend on small wells and springs and live far from municipal systems. “I hope to be able to get information from people and help them improve their water security and water quality.”

Maureen Mulheren, said she plans to increase transparency and communication between the Board of Supervisors and the community. She actually thinks that the reason she won in the first place was because of her involvement with the community doing things like picking up trash, pulling weeds, and listening to what people have to say. “Mostly, I’m excited to bring my energy and ability to work with a variety of people and community members to come up with solutions. I’m excited to be able to hear from a variety of people.” She said that she especially wants to hear from community members about how the county budget should be allocated. “I know they’re working on a strategic plan, but having more community input is really important before the millions of dollars are spent.”

Mulheren hopes to de-stigmatize the cannabis industry in Mendocino County and increase the efficiency of the cannabis business permitting and licensing process. She also wants to work with the community and the rest of the board to make sure that the project of turning the Best Western in Ukiah into transitional housing for Mendocino County’s housing insecure residents goes well.

“I think that the community was rather shocked at the way the purchase of the Best Western happened for homeless shelter. I would have encouraged more community outreach. But I want it to be successful. We need to have tough conversations with the community.”

Over the phone, Mulheren also mentioned that she wants to see measure B, known as the Mental Health Treatment Act continue to move forward. Very broadly, measure B was created with the stated intent of providing greater mental health resources to county residents.

“I think when people voted for measure B they expected to see change in our community that we haven’t seen yet,” said Mulheren.

Growing up in Ukiah, Mulheren said she was very excited to be taking on this role. “Our leaders are just regular people that have jobs and you see at the grocery store,” she said. “It’s so important to show our kids that we can volunteer to serve and be part of solutions instead of complaining and waiting for others to come up for solutions for us.”

“I’m not surprised at the results only because Glenn McGourty has been here a long time, he was well ahead of the candidates in the primary,” Kennedy said over the phone.

When we asked Kennedy what the election results said about the priorities of District 1 voters he said, “Most people know absolutely zero about local government. I can’t really opine about whether folks have their priorities aske or not because I think most people don’t know anything about it. The big reason Glenn was a front runner and he handily won was because of his involvement in the agriculture industry. That’s a sad thing because the agriculture business is huge, and it has nothing to do with management of local government at the county level.”

“Well naturally, I’m disappointed, but I feel really proud of the work that my campaign did and I had over 300 monetary contributions from people all over the county, and many endorsements. I had a strong campaign team and given the nine months we had to mobilize the campaign I think we did a great job and I’m happy with what we were able to accomplish.”