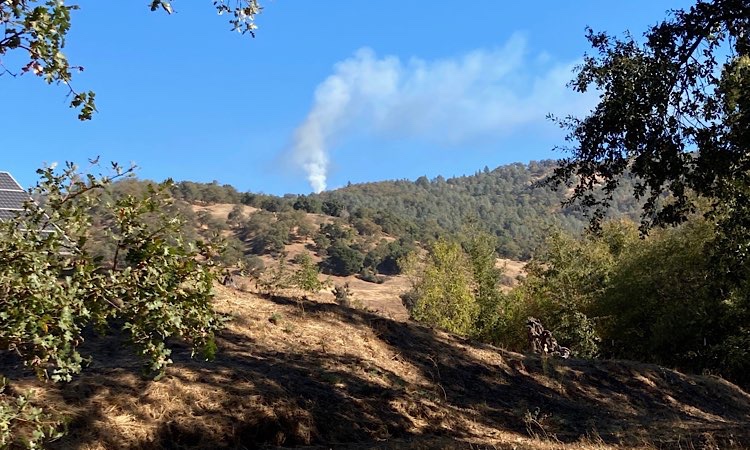 UPDATE 1:55 p.m. — The fire has been controlled and the smoke has dissipated.

UPDATE 11:31 a.m. — According to scanner chatter, firefighters are requesting a bulldozers to move a car that is blocking Mid-mountain Road. Apparently, this car caught fire, and the blaze has spread into the brush. The car then remains stuck in the road.

Firefighters from the Potter Valley Fire Department are making good progress in attacking the flames from the ground, while Cal Fire make air drops.

Said one firefighter over the scanner, “It’ll really help if we can move this car out of the way.”

ORIGINAL
MENDOCINO Co., 10/28/20 — A small fire is burning east of Potter Valley, “up Mid-mountain Road,” along the ridge line and near the Lake County line. As of about 11:10 a.m. the fire was putting off a good amount of white smoke, but was still concentrated in what appeared to be a small area.

Cal Fire aircraft, including tankers and a helicopter, are on the scene and making drops. However, the fire is some distance up a dirt road and it may take a while for firefighters on the ground to arrive.