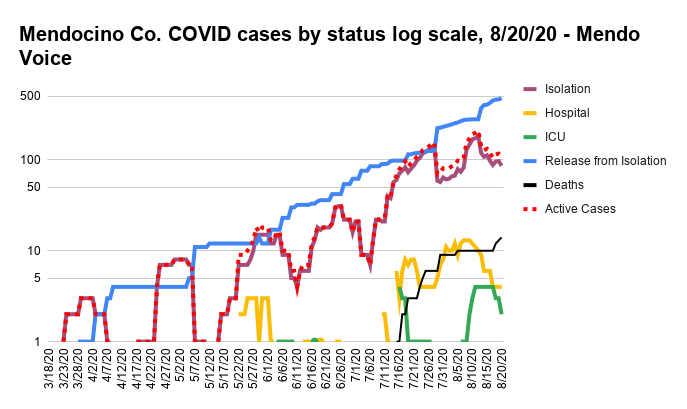 This graph shows the count of people hospitalized, in the ICU, in isolation, killed, and recovered. In addition there is a line called "Active Cases" which combines all statuses except releases. This last category is to provide a nice contrast between releases, and cases of current concern and deaths. This line shows a clear upward trend. The graph is presented in a logarithmic scale which better illustrates trends and relative fluctuations over large numbers.

UPDATE 2:10 p.m. — At today’s weekly COVID press conference Mendocino Public Health Officer Dr. Noemi Doohan announced that one more person had died of COVID in Mendocino County today, bringing the total for this week to five dead. Of those three died at Adventist Health Ukiah Valley, one at an out-of-county hospital where they were receiving a higher level of care, and one at Sherwood Oaks nursing home.

ORIGINAL
MENDOCINO Co., 8/20/20 — Three more residents of Mendocino County have died of the coronavirus disease this week, and a fourth died of pre-existing heart disease after a long struggle with COVID followed by an apparent brief recovery — his death has been called COVID-related. This brings the death toll in Mendocino County to 14, substantially surpassing Lake County’s three deaths and Humboldt County’s four.

As of Thursday, Aug. 20, 584 people in Mendocino County had tested positive with COVID, 86 remain in isolation with the disease, six were hospitalized with two of those in the ICU. However, the rate of new cases has slowed some as can be seen below. The doubling period has also increased. As counted by The Mendocino Voice, the last doubling took about 17 days, and since then it has been 20 days, and the total number of cases has not yet doubled, indicating that the curve has been somewhat “flattened” by recent efforts. Still, the disease does continue to spread steadily.

“He [the deceased] had survived pneumonia caused by Covid, then enjoyed a week of good health only to succumb to long standing heart disease. The cause is considered Covid related, bringing the total to 8 Covid deaths among our residents. 16 residents and the 8 staff with Covid have recovered, though some have persistent fatigue as is often seen with this virus.”

There has been a great deal of controversy in the public the counting of COVID related deaths. Given the fact that the virus disproportionately kills older people, there has been some claims that virus deaths are being over-counted in people who would have died anyhow of another disease. However, large scale statistical examinations indicate that if anything COVID deaths are under-counted nationally. A straightforward look at the number of deaths in the various regions of the United States since March, compared to the same period last year, shows around 200,000 more people died for that period than last year.

Here are some graphs showing the current progress of the pandemic in our county.